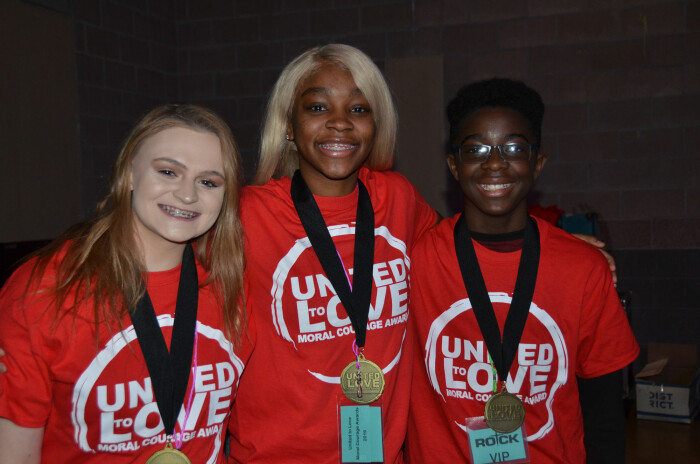 A special “first” occurred at ROCK Feb. 9. The first-ever United to Love Youth Moral Courage Award was presented to J’TA Freeman, a high school senior from Washington, D.C. She was one of three finalists for the award, which also included Sophia Didawick, a senior from Berkley Springs, W.Va., and Caleb James, 12, from Severn. (Read their stories, below).

The United to Love Moral Courage Awards celebrate people who put their faith into action especially when doing so is uncomfortable or unpopular. (Young Adult and Adult nominations are being accepted online, at www.bwcumc.org/moral-courage-awards.)

“Love of God is always linked with love of neighbor, a passion for justice and renewal in the life of the world,” said the Rev. Stacey Cole Wilson, Executive Minister of Justice and Service for the BWC. She presented the award on-stage at ROCK. “The Moral Courage Awards seek to identify, inspire, and encourage persons of various ages who are alleviating human suffering, boldly living their faith and then sharing their stories with the invitation for persons to consider that they have the power to change/influence."

Freeman, who attends Ebenezer UMC in Washington, won the award thanks to her dedication to serving the youth of Washington, D.C. She was nominated for the award by her pastor, the Rev. Bresean Jenkins.

“I am the Youth Mayor of Washington,” Freeman said, a position that is part of the Youth Advisory Council, a 32-member body of from all of the wards of the District of Columbia, “as well as a co-chair for Students Demand Action in Washington. I speak out for the youth… and I also speak out in protest against gun violence and for better gun legislation.”

Freeman’s uncle was killed when he was 18 years old, she said. “He was basically left to die,” she said.

To this day, she added, no one knows who murdered him. But because his voice was silenced, Freeman is using her voice to speak up and speak out.

“In Washington, D.C., that’s what we constantly see,” she said. “Youth being killed by guns and by violence. Me, I’m a Christian, and I don’t believe in that.”

Her efforts also include improving the quality of education in the city.

“I attended D.C. public schools,” she said, “and I believe that the public schools in D.C. do not prepare its youth for the next level, i.e., college or trade school. It doesn’t prepare them at all.”

Freeman trains youth on how to be an advocate for issues they care about because, she said, “everyone has a God-given voice.” All this work, she said, is God-inspired.

“There was something in me that said, ‘Get up and go,’” she said. “I believe that it was God. My friends call me crazy, but I believe that God told me, ‘This is your calling; you are here to speak up and speak out for others who can’t.”

Freeman finds that her ministry is sometimes hard. Because her faith is so interwoven with her work, some people say, “You can’t mix church and state.”

“But I’m a Christian,” she said. “I’m going to mix it because this is my life. I just continue to spread the love of God in my community, in my school.”

Didawick’s nomination cited her work in a “Care Pack” ministry in Morgan County, W.Va. Didawick packs hygiene kits for students in and around there that include soap, body wash, deodorant, shampoo, conditioner, a toothbrush and toothpaste, floss and mouth wash.

Didawick started the ministry in her sophomore year after learning that some of her fellow students didn’t have essential hygiene products. Today, she packs about 350 kits every month, totaling 6,458 since the start.

“One of my closest friends had enough courage to talk to me and tell me about an issue that he was struggling with: lack of hygiene items,” she said. “I do what I do to provide hygiene items for students, but not only that, I make sure that they are receiving the love of God through my Care Packs.”

Didawick and her team pray over each Care Pack, both as it’s being assembled and as it’s delivered. Each Pack has a sticker on it, saying simply, “Jesus Loves You.”

Sometimes, she confesses, she wonders if this work is making a difference.

“I get a lot of kids that come up to me and they’re a little unsure,” she said, “they’re like, ‘Do you do the Care Pack Ministry?’ When I say, ‘Yes,’ they just give me the biggest hugs.”

Nearly 70 percent of the population of Morgan County, W.Va., live below the poverty line, Didawick said. “I knew I had to do something, I just didn’t know how I was going to do it, or why I was doing it. I prayed about it for a long time because something like this, you don’t just wake up one day and get a whole bunch of hygiene stuff and, you know, do it. God kept telling me, ‘You have to get up and go.’”

Didawick knows her ministry is helping others.

God has also been telling her to keep her ministry going after she graduates in a few months.

Her efforts have been supported by two grants from the BWC. The Young People’s Ministry area contributed $5,000 recently, and the Action and Advocacy Network awarded her $3,000.

Caleb James is in the 7th grade, lives in Severn and attends Sharp Street Memorial UMC. After being selected to serve on the Student Leadership Council at his school, James came up with the idea of collecting donated socks for homeless shelters around the state. More than 2,000 pairs have been donated and given away so far.

James said the idea for socks came because winter was fast approaching; they called the donation drive “Socktober,” he said. “We wanted to keep everybody’s feet warm. If feet are cold, it’s hard to get around and do what you need to do.”

When James was in 5th grade, he was involved in a project where his topic was poverty and homelessness. The next year, when he was nominated for Leadership Council, he brought up the idea of helping people.

“It was winter time,” he said, “so I said, ‘How about we donate some warm clothes, specifically, socks?’ So, we organized Socktober.” Donations come in from the church and from the school.

James knows that God is calling him to continue his sock ministry.

“God is calling me to help others,” he said. “I thought we should make a difference in our schools, raising money for people in need, and so God called me to do that.”

Learn more about the United to Love Moral Courage Awards and these three phenomenal young people at There are three short videos, each highlighting one of the nominees.

In addition, you can nominate Young Adults and Adults for similar awards, which will be announced at the 2019 Baltimore-Washington Conference Session in late May. Applications are due April 1.

Congratulations to all of the youth. A special congrats to my nephew Caleb James, keep up the good work guys. God is good !

Great job! It’s so beautiful to see this generation focused on the needs of others! Also a special congratulations to Caleb, you make big issues seem like a piece of cake, thanks to your big heart and obedience to God