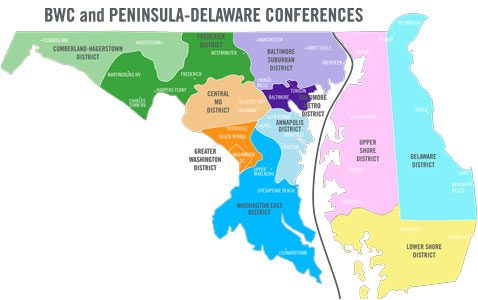 Plans have recently been announced by the Northeastern Jurisdiction College of Bishops to affiliate the Peninsula-Delaware and Baltimore-Washington Annual Conferences of The United Methodist Church. With the affiliation, which becomes official on Sept. 1, the two conferences will be led by Bishop LaTrelle Easterling.

What is an annual conference?

The annual (sometimes referred to as “regional”) conference is described by the church's Constitution and other parts of the Book of Discipline as the “basic unit” of the church. Supervised by a bishop, the annual conference has a central office and professional staff that coordinate and conduct ministry and the business of the conference. It likely has a director of connectional ministries, treasurer, directors of program areas (such as camping), communications director, and other staff as deemed appropriate for the annual conference and as required by the Book of Discipline. Clergy and laity also serve on conference boards, commissions, and committees. The clergy and an equal number of laity gather each year for an Annual Conference Session, presided over by the bishop appointed to lead that conference.

What comprises the Peninsula-Delaware Conference?

The Peninsula-Delaware Conference of The United Methodist Church has 416 churches, with approximately 81,100 members, in Delaware and the Eastern Shore of Maryland. Its office is in Dover, Delaware. Its current episcopal leader is Bishop Peggy Johnson, who also leads the Eastern Pennsylvania Conference, and was elected bishop out of the Baltimore-Washington Conference. She announced on Feb. 13 that she will be retiring at the end of the next Northeastern Jurisdictional Conference, tentatively scheduled to meet in a special session in July 2021. The Peninsula-Delaware Conference’s vision statement is “Connected Christians offering the Hope of Jesus Christ in today’s world.” Learn more on its website at http://www.pen-del.org.

What comprises the Baltimore-Washington Conference?

The Baltimore-Washington Conference of The United Methodist Church has 615 churches with approximately 150,000 members in Washington, D.C., parts of Maryland, the eastern panhandle of West Virginia, and Bermuda. Bishop LaTrelle Easterling is the episcopal leader. She was elected a bishop in July 2016 and began serving the BWC on Sept. 1, 2016. Its mission statement is “Inspiring and equipping local faith communities to develop disciples of Jesus Christ for the transformation of the world.” Learn more on its website at www.bwcumc.org.

What is being proposed?

A lack of funds in the denomination’s Episcopal Fund is expected to leave the Northeastern Jurisdiction with seven bishops to supervise 10 annual conferences. To ensure each conference has episcopal leadership, the College of Bishops has announced a plan for coverage, including affiliating the Peninsula-Delaware and Baltimore-Washington Conferences, so that one bishop will oversee both of these conferences.

Why are such measures necessary?

The General Council of Finance and Administration has reported that the denomination’s Episcopal Fund would run out of money by 2024. Giving is not keeping pace with the fund’s obligations and the fund is depleting its reserves, the United Methodist News Service reported. "If we want to reduce the Episcopal Fund, the most significant way — and probably the only place to do so — is by reducing personnel, reducing the number of bishops,” said Bishop Cynthia Fierro Harvey, president of the Council of Bishops. The cost for each U.S. bishop is about $285,000 a year, including salary and benefits, and their housing allowance and office staff.

To address this financial challenge, the Council of Bishops is asking that no new bishops be elected this quadrennium when 16 of the 46 active bishops retire. Jurisdictions would then explore new ways of handling episcopal oversight.

How many bishops will retire in the Northeastern Jurisdiction?

What plan for coverage of the annual conferences has the College of Bishops announced?

In a letter on March 29, the bishop unveiled the following configuration for coverage:

This is an interim plan, intended to run from Sept. 1, 2021, through Dec. 31, 2022. The next in-person Jurisdictional Conference will set the episcopal areas and assignments of bishops for the next quadrennium.

Is what is being proposed for the Peninsula-Delaware and Baltimore-Washington conferences a merger?

No.  Leaders in both conferences and the jurisdiction have stressed that both the Peninsula-Delaware and Baltimore-Washington conferences will maintain their distinct identities – in polity, financially, and culturally.

The two conferences were part of the same episcopal area and shared a bishop in the past. How will that experience inform this affiliation?

Conference and jurisdictional leaders are taking great care to ensure that this affiliation is a new thing, not bound by any tradition or historic expectations. The newness with which the affiliation is being approached is expected to lead to innovative thinking and creative approaches to ministry and stewardship.

What can local churches expect?

With the affiliation, very little of the day-to-day operations of the local church will change. However, leaders from both conferences have begun to meet to determine how they might best share programs and resources to better equip local churches in their discipleship. Initially, some of the areas in which both conferences have strengths – like young people’s ministries and antiracism ministries -- might begin to work together. In addition, training opportunities on a number of topics might be opened up and offered to members of both conferences.

How and when will this become official?

The affiliation will begin on Sept. 1, 2021. The bishops and extended Cabinets from both conferences have begun conversations.

How can I voice my thoughts about the affiliation?

The Baltimore-Washington Conference has 24 delegates to the Northeastern Jurisdictional Conference. Their names and contact information is online. The Peninsula-Delaware Conference has eight delegates.