More than 5,000 youth, young adults and their leaders gathered in Ocean City, Md., the first weekend of February, for the annual ROCK retreat. It is the largest gathering of United Methodists each year in the Baltimore-Washington Conference.

With the theme “Let’s Get Ready to Humble,” those in attendance were treated to music, entertaining performers and a thought-provoking Bible study on the book of Jonah.

“My main point was to talk about a real person in Scripture,” she said in an interview. “He led a real life with ups and downs so that we, as God’s people, could relate to that and understand that we don’t have to be perfect.” 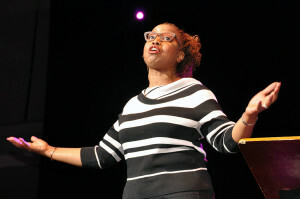 Salter McNeil added that in the telling of the Jonah story, she hoped her audience would find that their story intersects with God’s story. “And when God does intersect with our story,” she said, “it’s not for punishment, it’s to push us towards our destiny.”

Salter McNeil said her message for ROCK was that every person is born with a purpose.

“Like Jonah, we can get off our purpose, we can get detoured,” she said. “We’ve seen Jonah as a story of God getting mad? I think its God wanting us to reach our full potential.”

David John, an 11th grader from Trinity UMC in Germantown, was a first-timer at ROCK. “I like how we can all come together and praise God,” he said. He added that Salter McNeil’s messages spoke to him. “I can relate to them. I had never heard the story of Jonah before.”

Violett Akpona, also from Trinity, said that in this, her second time at ROCK, it was nice to hear different speakers. “ROCK keeps bringing different kinds of people together,” said the 9th grader, “and it forms a connection no matter how different we are.”

Akpona said that Salter McNeil’s Bible study was lively and animated, and helped bring the story to life for her.

Justin Violette, another Trinity member, was at his fifth ROCK.

“The message that she’s been giving is a really good message,” he said. “This year’s ROCK has been better than most.”

He said he keeps coming back to ROCK because they are good learning experiences about his faith and the Bible. “And,” he said, “it’s fun.”

Simon Lee was at his third ROCK. “All three of them have been emotional and touching,” he said. “This one has been good because everyone can relate to what the speaker has been saying.”

His favorite time at ROCK, though, was found outside the Convention Center. Free time, he said, where group members “see each other’s faces for a long time, and actually get to know each other,” were the best. 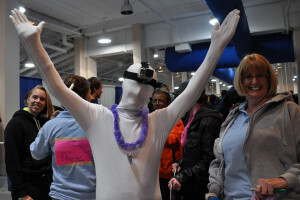 The BWC’s Conference Council on Youth Ministries (CCYM) was at ROCK, offering participants a chance to “Ask the ‘Y’ Guy.” Nathan Jones, an 8th grader from Epworth UMC in the Baltimore Suburban District, dressed head-to-toe in white to play the part of the Y Guy.

“In the CCYM symbol, the ‘Y’ looks like a guy, and he’s our symbol for stress less, to help reduce stress in teenagers across the conference. I’m the mascot,” Jones said.

People were stopping by CCYM’s booth in the ROCK Shop area, asking questions of the ‘Y’ Guy and posting notes on a board. Jones said it was all in an effort to raise awareness about CCYM and how it can make a difference throughout the conference.

Erich Wildberger, in 11th grade, supported Jones by being the ‘Y’ Guy’s , he said. “I make sure he can see properly,” he said, noting that Jones’ costumer – which covered his face – allowed him to only see six inches. CCYM, he said, was there to help connect youth to each other and to the annual conference, and vice versa.

The offering taken Sunday morning raised $ designated by ROCK to go towards the love offering for Bishop Marcus Matthews. That love offering is earmarked to build a health and sports facility on the campus of Africa University. The bishop was not able to ROCK this year; instead, he was to Africa University for a meeting of their Board of Directors.