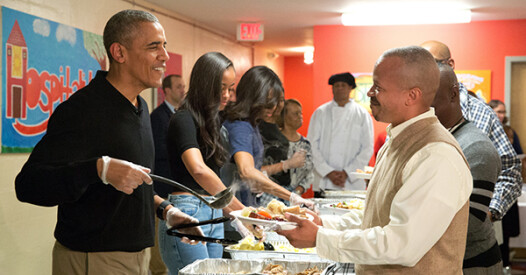 It’s not every day that the president of the United States comes to your church and serves dinner. But that’s exactly what happened the day before Thanksgiving at St. Luke’s Mission Center, part of the multi-site ministry of Metropolitan Memorial UMC in Washington, D.C.

As cameras recorded his every move, President Barack Obama served a traditional Thanksgiving dinner to military veterans as part of the feeding ministry at St. Luke’s. He was joined by the First Lady, Michelle Obama, their two daughters, Sasha and Malia, and the First Lady’s mother, Marian Robinson. Other guests and extended family members, numbering about 30 people, also attended. 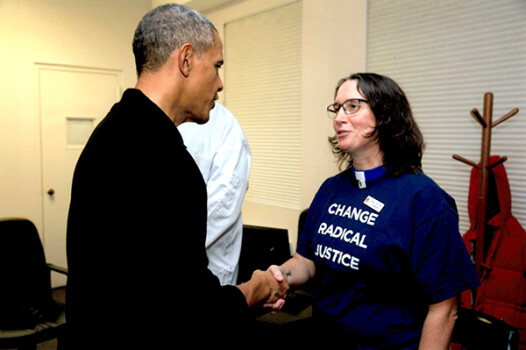 “The ‘Feast with Friends,’ as the event was called, was for veterans, their families and formerly homeless participants in Friendship Place’s Veterans First program,” said the Rev. Dottie Yunger, lead pastor at the Mission Center since July 1, 2013.

The food for the meal was provided by Campus Kitchen, an organization run out of St. Luke’s for the past three years. It is part of a national organization that utilizes volunteers, especially college students, to recover food from local restaurants, grocery stores farmer’s markets. Each month, said, Campus Kitchen DC gathers about 5,000 pounds of food which turned into about 1,500 meals.

Friendship Place is a non-profit organization that is working to end homelessness in the District, Yunger said. Its administrative offices are housed at St. Luke’s. Friendship Place also has a welcome center on Wisconsin Avenue, near the Tenley Metro, and Campus Kitchen provides lunch there every day.

Not a lot of people know about the ministry of Campus or St. Luke’s, or Friendship Place, said Yunger. The president’s visit has helped to validate some of their hard work over the past few years.

The visit also highlighted the plight of veterans in Washington. “One out of four homeless persons in the District is a veteran,” said Yunger.

The congregation at St. Luke’s merged with Metropolitan Memorial UMC about eight or nine years ago. Since becoming a Mission Center, its focus is on serving the community. That’s how it came to house Campus Kitchen, which is reaching out across the city to bring food abundance to what Yunger calls “food deserts.”

In fact, most of the meals are served outside the Mission Center. Meals are usually delivered to where they are needed, such as Mt. Vernon UMC in Ward 7 in the District, where they provide lunch and dinner on Wednesdays, and lunch on Saturdays.

“We partner with congregations who are the presence in their neighborhoods,” Yunger said. “They open their doors and serve the meal.”

Another example is at Hughes Memorial UMC in Washington. On Tuesday nights, the church hosts a community anti-violence program which consists of dinner and a mentoring/tutoring program for youth in the neighborhood.

“We started partnering with them,” said , and Campus Kitchen started providing the meals. Word has spread among the kids in the community because the quality of the food has improved. “The kids come and they do a Bible study and they have college students come from Howard University to do the tutoring.”

It’s all meant to provide a safe place for the kids on a weeknight, she said, along with a wholesome delicious meal.

“Those kids are now starting to come to that church on Sunday morning,” she added. “The kids know that this is the safe place to go if I need dinner or I need help with my homework; if I need to get off the street and out of the violence, I go to the church. And they’re joining the church because of it.”

On the day of the president’s visit, said, their partners at Friendship Place wanted to do a lunch for veterans who had come through their programs. Those veterans, she said, returned home from serving their country and didn’t have a job or a home. “This was going to be a Thanksgiving meal for those clients.”

Friendship Place leaders reached out to the First Lady to see if she would be interested in coming to lunch, Yunger said. They also asked Campus Kitchen to make the meal.

On the Friday night before Thanksgiving, the White House called Friendship Place and said, “Mrs. Obama is not coming for lunch on Wednesday. Instead, the whole First Family is coming for dinner with 30 guests and relatives who are in town for Thanksgiving,” Yunger said.

Friendship Place then called Campus Kitchen, asking if they could provide both lunch and a dinner.  And those 30 guests who are coming? They wanted to do a service project while the First Family served dinner.

and her team sprung into action.

Lunch was served as per usual on the Wednesday before Thanksgiving, said, for the clients of the Welcome Center. Dinner was served, by the First Family, to more than 75 people.

“Before the dinner,” said, “everyone had to be sitting down in the room, for security reasons. We couldn’t tell anybody who was coming or what was happening, just that a special guest was coming.”

Some of the folks, said, maybe the mayor was coming.

“All of a sudden, President Obama and Mrs. Obama… walked in the room. Immediately, the 60 or so veterans and their families, plus all of the staff and volunteers, were up on their feet applauding.”

The president served the turkey; the First Lady served the vegetables, Yunger said.

“She was very excited to hear how our Campus Kitchen works,” Yunger said.

The First Family was extremely gracious to everyone who came through the line, Yunger said. The president thanked each veteran for their service and inquired as to how they were doing.

The guests and family members packed bags with snacks, toiletries and other items for a street outreach effort of St. Luke’s, Yunger said. The bags are part of their “Grate Patrol” program in partnership with the Salvation Army, who delivers the bags to people living on the streets.

At the end of the meal, , along with other staff from the various agencies, had a chance to meet the president.
“He walked right up to us, introduced himself, shook our hands and asked us what our names were,” said Yunger. “For the life of me, I couldn’t remember what my name was.”

Eventually, her nerves calmed down and she could recall her name, and was able to engage the president about the Metropolitan Memorial shirt she was wearing. The shirt, which read, “Radical, Change, Justice.” “The president said, ‘I don’t know many pastors who talk about radical change.’ And I couldn’t think of a thing to say back to him,” said Yunger. “But it occurs to me now that I don’t know any pastors who aren’t about radical change.”

said the president’s visit was a shot-in-the-arm for their ministry.

“The energy and the enthusiasm and the excitement that was in the room when the president and his family were there,” said , “has been very meaningful for the clients who were there and for the staff who do this on a day-to-day basis. It reminds us why this is important and why this is good work.”