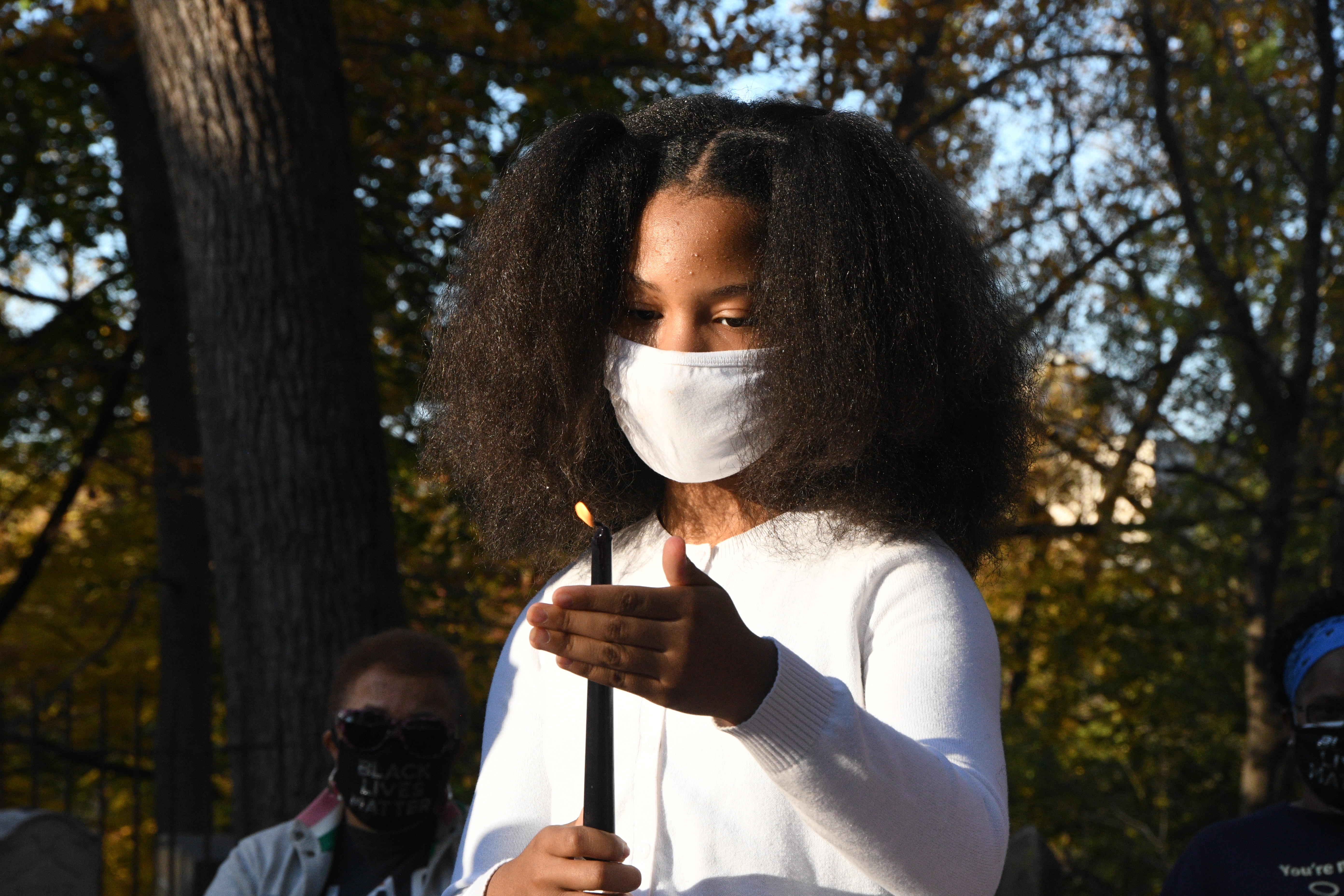 All Saints Day is a time for remembering and honoring the dead. However, this year, the spirit of resurrection crept into a unique service between Dumbarton and Mt. Zion UMCs in Georgetown, whose members gathered in an historic cemetery to address racism and pray for hope.

Under the colorful autumn leaves on Nov. 8, a lone saxophone played in the Mt. Zion Female Union Band Cemetery. Down the hill was a small building that once sheltered run-away slaves seeking freedom on the Underground Railroad.

The congregation joined in song and prayer as candles were lit and they noted loved ones who had died over the year. They also lamented the 243,305 and 1,258,478 people who have died this year in the U.S. and worldwide from the coronavirus pandemic.

Then, the acolyte began to light candles for African Americans who were victims of police brutality and unjustly murdered in 2020.

Evoking the historic lynching of people of color, the Rev. Selena Johnson of Mt. Zion UMC invoked the words from the inscription on the wall at the National Memorial for Peace and Justice in Montgomery, Alabama. Remember, she said, “with hope, because hopelessness is the enemy of justice; with courage, because peace requires bravery; with persistence, because justice is a constant struggle; and with faith, because we shall overcome.”

The two congregations began as one church, organized in a barrel-maker’s shop in 1772. The membership of Dumbarton Street Methodist Episcopal Church was about fifty percent black. In 1816, the African American members left to form Mt. Zion UMC. It is the oldest African American church in D.C.

According to the churches’ websites, in 1808, Dumbarton purchased land for the Old Methodist Episcopal Burying Ground. In 1879, Mt. Zion took over the cemetery, now named The Female Union Band Society Cemetery. The Female Union Band Society, in keeping with Methodist tradition, was a cooperative benevolent society of free black women whose members pledged to assist one another in sickness and death.

Over the years, financial difficulties led to the ownership of the cemetery reverting back to Dumbarton. But recently, the two congregations have made intentional efforts at reconciliation and fellowship.

In 2017, ownership of the cemetery was formally returned to Mt. Zion, in whose hands it belongs, said the Rev. Rachel Cornwall, pastor of Dumbarton UMC.

The congregations continue to work and worship together as they build bonds of friendship and ministry. A part of that work includes recognizing the impact of systemic racism. Both churches are committed to be anti-racist churches.

“’Whiteness,’ has become both a shield and a weapon that many of us don’t recognize we wield,” said Debbie Woodcock, using a prayer from the BWC’s racial justice resources. “In ignorance and arrogance, those of us who are white continue to be stubborn and slow to acknowledge the past and present realities of systemic racism or to take responsibility for our transgressions, aggressions, and complicity in systems that harm and seek to dehumanize black and brown siblings.”

Members of the two congregations gathered that autumn afternoon to remember the dead and to deepen their understanding that “no one is free until all are free.” They prayed to “rise united,” so that they can “love as God intends.”

We were very glad to be able to remember and hope with our neighbor, Dumbarton. We typically do a joint service at Pentecost, but because of the pandemic we tried something different this year.

It was a very meaningful service, and we are so grateful for this opportunity to worship together. Thank you, Melissa, for this article.

Keep racism front and center until it is abolished.