One tweet summed it up. “Today, I saw more United Methodists than white supremacists.” 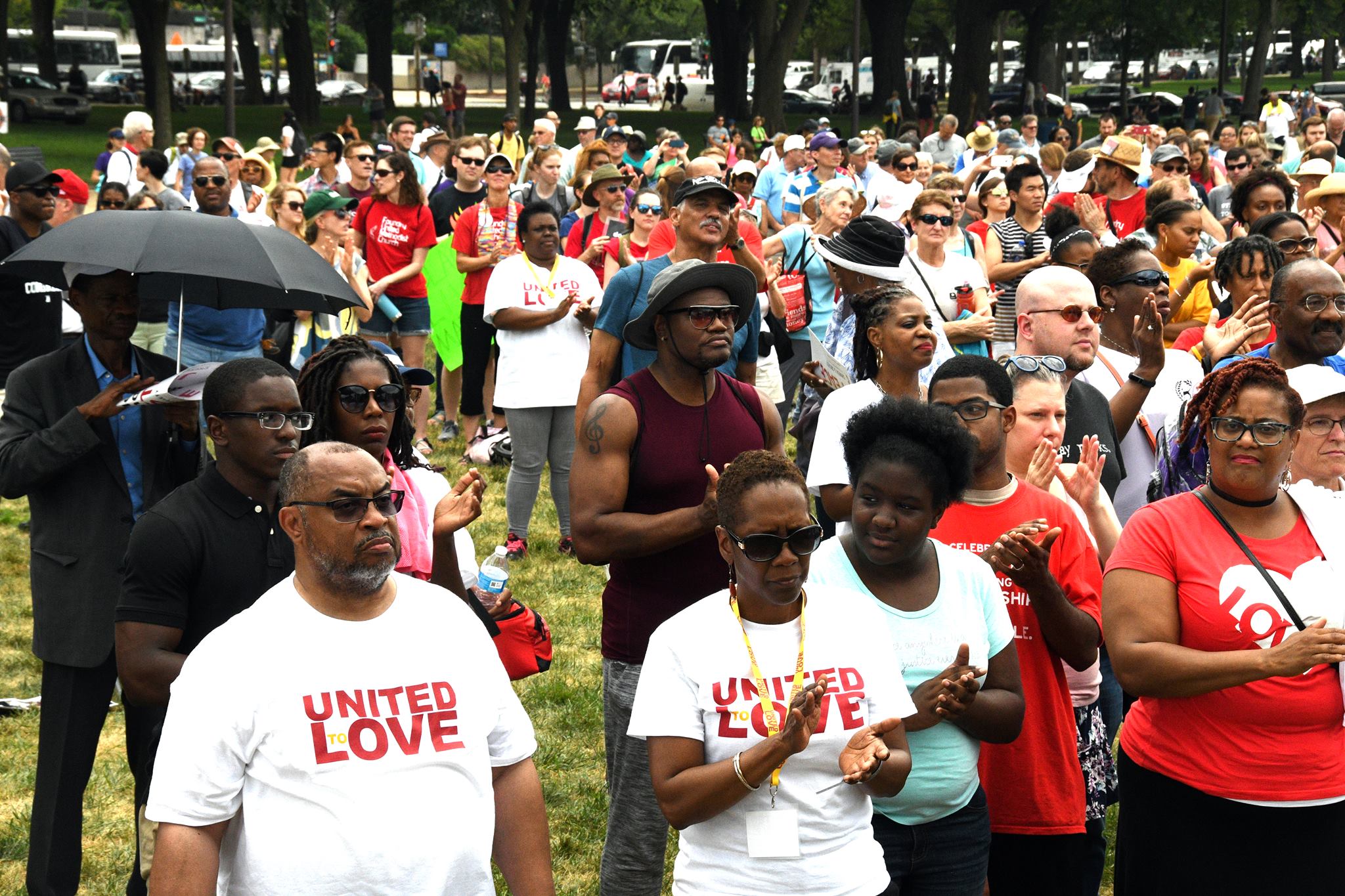 Jack Jenkins of Religion News Service was responding to the Baltimore-Washington Conference’s United to Love rally, created as an alternative to the Unite the Right rally that was staged by white supremacists on Aug. 12 in Washington. D.C.

United to Love was the brainchild of Bishop LaTrelle Easterling. Early this summer, she heard that Jason Kessler had applied for a permit in D.C. to observe the one-year anniversary of a white supremacy rally in Charlottesville, Va., where a counter protester and two police officers were killed.

The bishop became convinced that censoring or shutting down those voices of hate was not the right answer. She issued a call to prayer and action. “It is my belief that the way to respond to negativity is not by silencing it; rather, the outpouring of love should be so strong as to overwhelm it,” she said. “In that spirit, our numbers should completely overwhelm and drown out any messages of hate, exclusion or division.”

Joining with people from other faith traditions, Easterling saw her vision become reality as close to 1,500 people gathered on the National Mall for four-hours of worship and witness. Two miles away, the Washington Post reported, Jason Kessler and perhaps 20 fellow members of the far right — some wearing bright red “Make America Great Again” hats, marched under police escort from the Foggy Bottom Metro station to their heavily protected rally area near the White House.

But the power of the United to Love rally went far beyond the numbers.

“These are conversations we’ve not had before. Our people are moving beyond the comfort of their churches,” said the Rev. Stacey Cole Wilson, the BWC’s Executive Minister of Justice and Service. 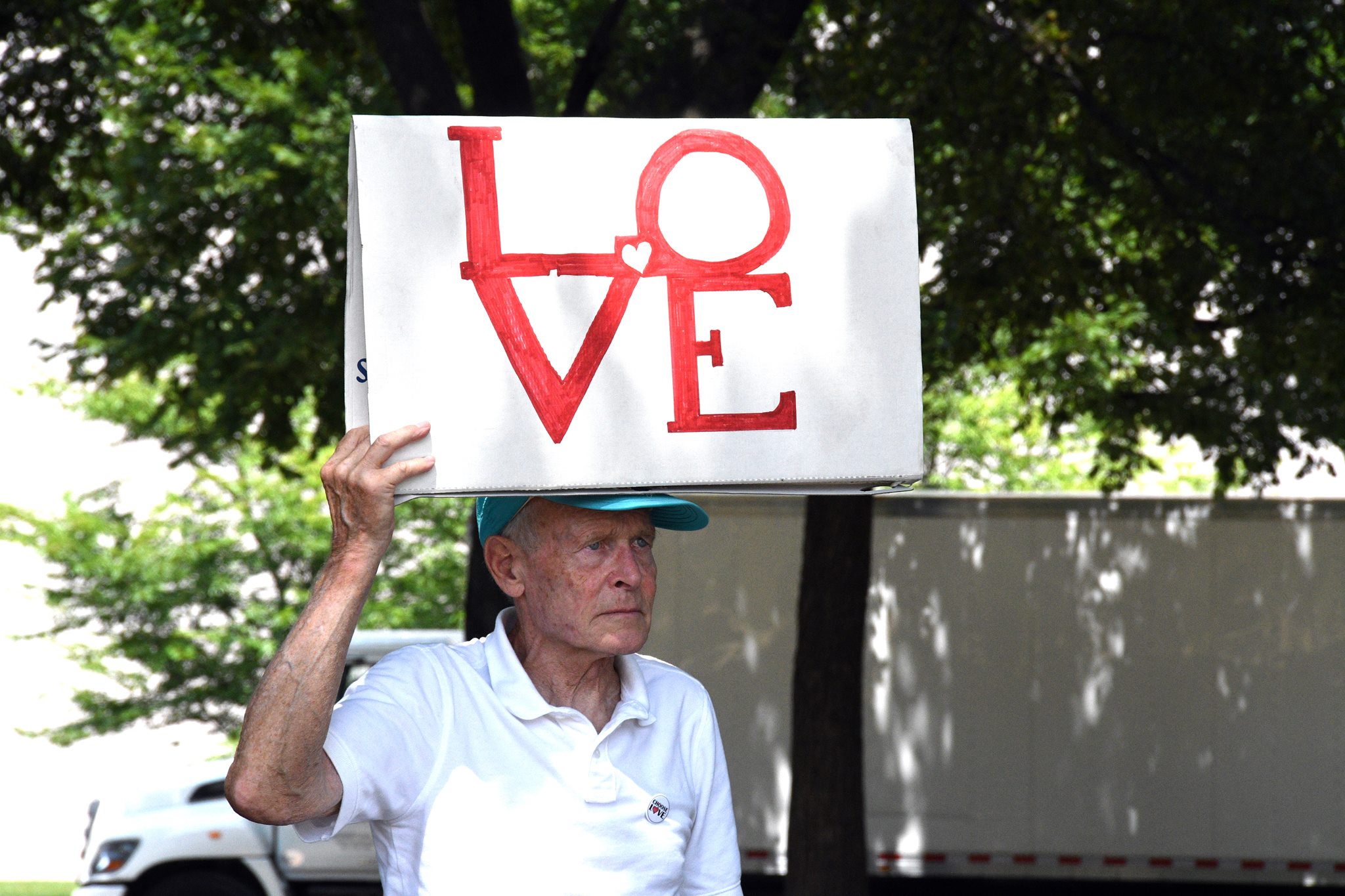 Looking out over the Mall before the worship began, Cole Wilson became teary-eyed. “God is great,” she said. “Nothing is too hard for God. This is a God-realized vision. It blesses me.”

Diana Park of Christ UMC in Washington, D.C., was also feeling blessed. Park grew up knowing prejudice and her family had been impacted by the Ku-Klux-Klan. Honestly, she admitted, she felt little but fear and hate for those who persecuted the people she loved.

As a new United Methodist, the rally gave her a chance to explore those feelings in community and from a faith perspective. Before marching the mile to the rally, Park confessed that she was now claiming the biblical notions that “love casts out fear,” and “love overcomes hate.” 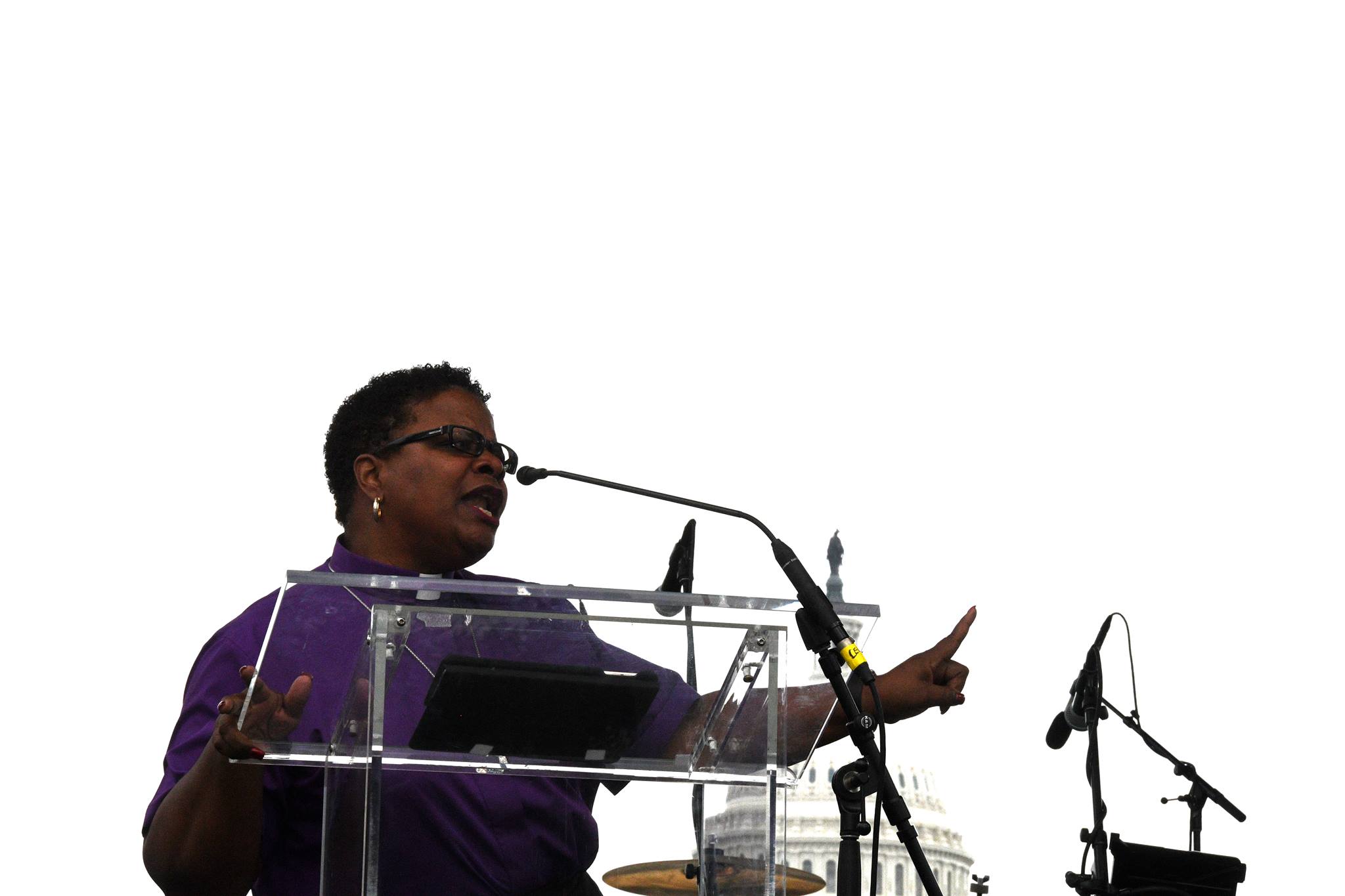 But, she continued, “love gives life.” Love creates, restores, heals, encourages, empowers and welcomes. “Love is God and loving is of God.”

Recognizing that people of a variety of faith traditions were gathered, the bishop insisted that “we meet one another at our deepest experience of God” and “be willing to live our faith aloud.”

Part of living out loud, Easterling said, is recognizing that “there is not a single mainstream religious tradition founded on the notion of racial superiority, domination or hate. Those notions are antithetical to every higher power called upon in the name of holiness. “

In remarks later in the program, Easterling said, “We are gathered in the name of all that is good, righteous, holy, sanctified and true. … May we understand that this is our work! There is no one exempt from this work of repentance, healing, dismantling or working to overcome racism.” 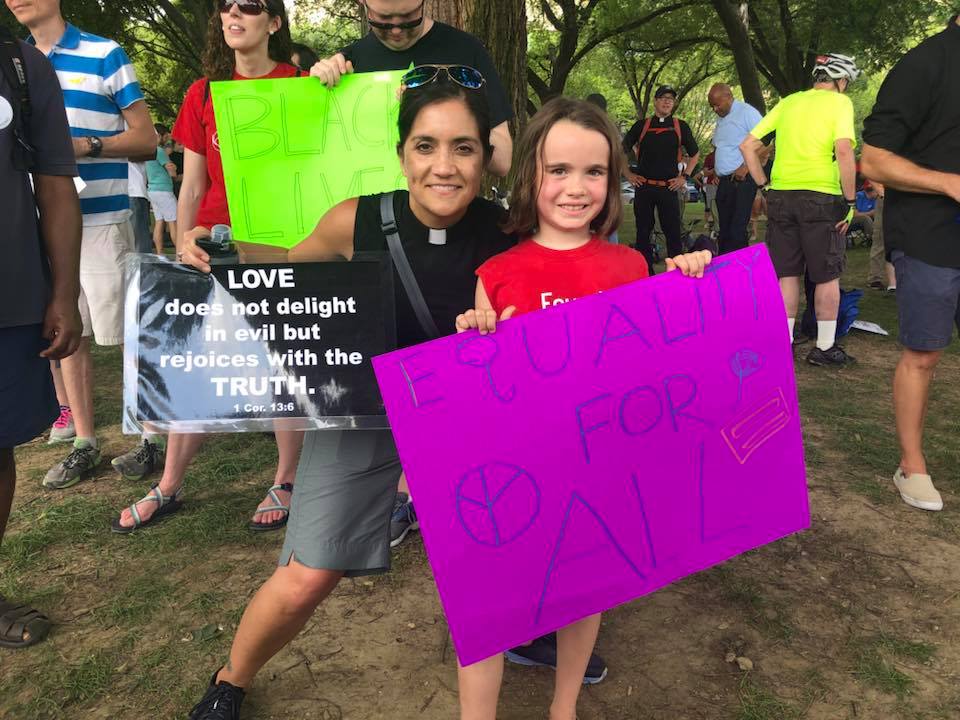 But while the church talks boldly about love, it doesn’t always put that talk into action. United to Love gave people a starting point to consider the foundations of their faith and brought United Methodists to the table with other groups and individuals doing advocacy work in this area.

“Part of this is the idea that love is self-sacrificing, love crosses all boundaries of age, race, socio-economic status and even perceptions about who God is today,” said Christie Latona, the conference director of Connectional Ministries. “Love is bigger than our individual interests, love is bigger than what we’re comfortable with, and love is enough.”

“God is love, and that God is in each of us,” Latona continued. “So, we give ourselves over to that; that’s what transforms us, and then we can participate in the transformation of others and society. But it’s not about something we put on, or something we pretend. That’s where we get into trouble -- when we become the authority on love instead of allowing the love that is of God, that is within us, to change us and allow us to respond differently than we would we if we were just operating out of our self-interest.”

Those thoughts about love were especially poignant to Laura Hughes Baker, a United Methodist who traveled from North Carolina especially for the United to Love rally.

As someone from the rural south, Baker said segregation is a part of her history and that “the KKK is still marching.” She wanted to respond in some tangible way and the rally felt like a perfect step.

‘This is our task’ 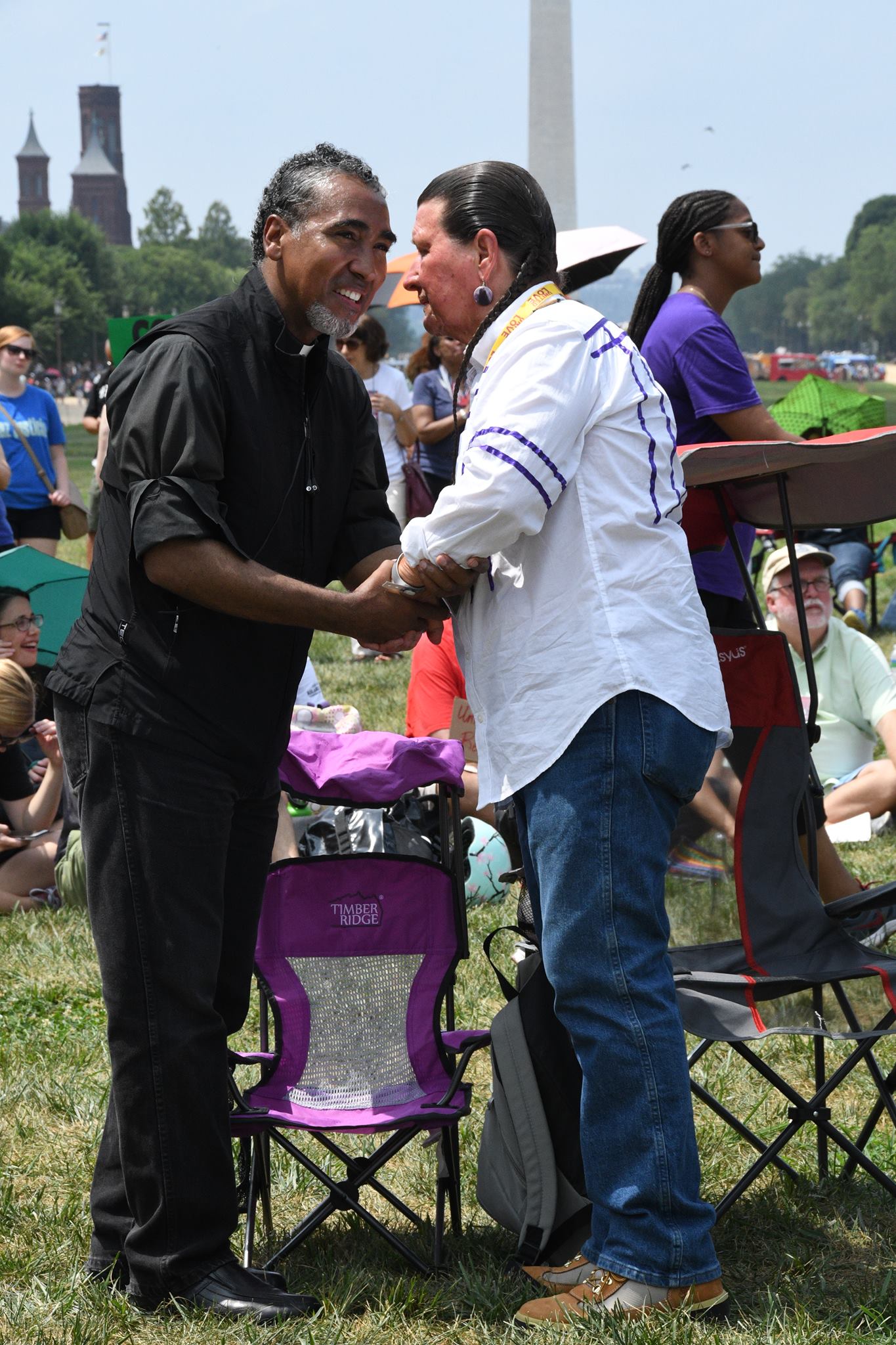 During the rally, more than 25 speakers and musicians appeared before the crowd, which often drifted to the shade trees on the sides of the grassy mall.

Dove-award winning artist Nicole C. Mullen, energized the Deaf community present when she performed one of her songs in American Sign Language. From the podium, youth, Native Americans, rabbis, imams, Episcopalians, community organizers, and many others spoke about love peace and justice.

Gathering on the National Mall, with the US Capitol on one end and the Lincoln Memorial on the other, was a fitting place to take up this task, said Wesley Seminary President, the Rev. David McAllister-Wilson. He noted the monumental impact of the setting, where, in 1925 the KKK held one of their largest parades; where the Rev. Martin Luther King, Jr. spoke of dreams; where Julia Ward Howe penned the lyrics, “Mine eyes have seen the glory of the coming of the Lord,” and Barack Obama marched in an inaugural parade as the first black president of the United States.

He called on those present to, in the words of President Abraham Lincoln, embrace the better angels of our nature. “As they unite the right,” McCallister Wilson said, “We must unite the righteous.”

While the United to Love rally was only interrupted by one loud heckler who shouted during Bishop Easterling’s sermon before being encouraged by security to move along, some people were concerned about the perceptions and consequences of rising racial unrest in the country.

The Southern Poverty Law Center says it is tracking 954 hate groups, and the Center for the Study of Hate and Extremism reports there were 1,038 hate crimes recorded in the 10 largest American cities last year, an increase of 12 percent from 2016 and the highest figure in more than a decade. 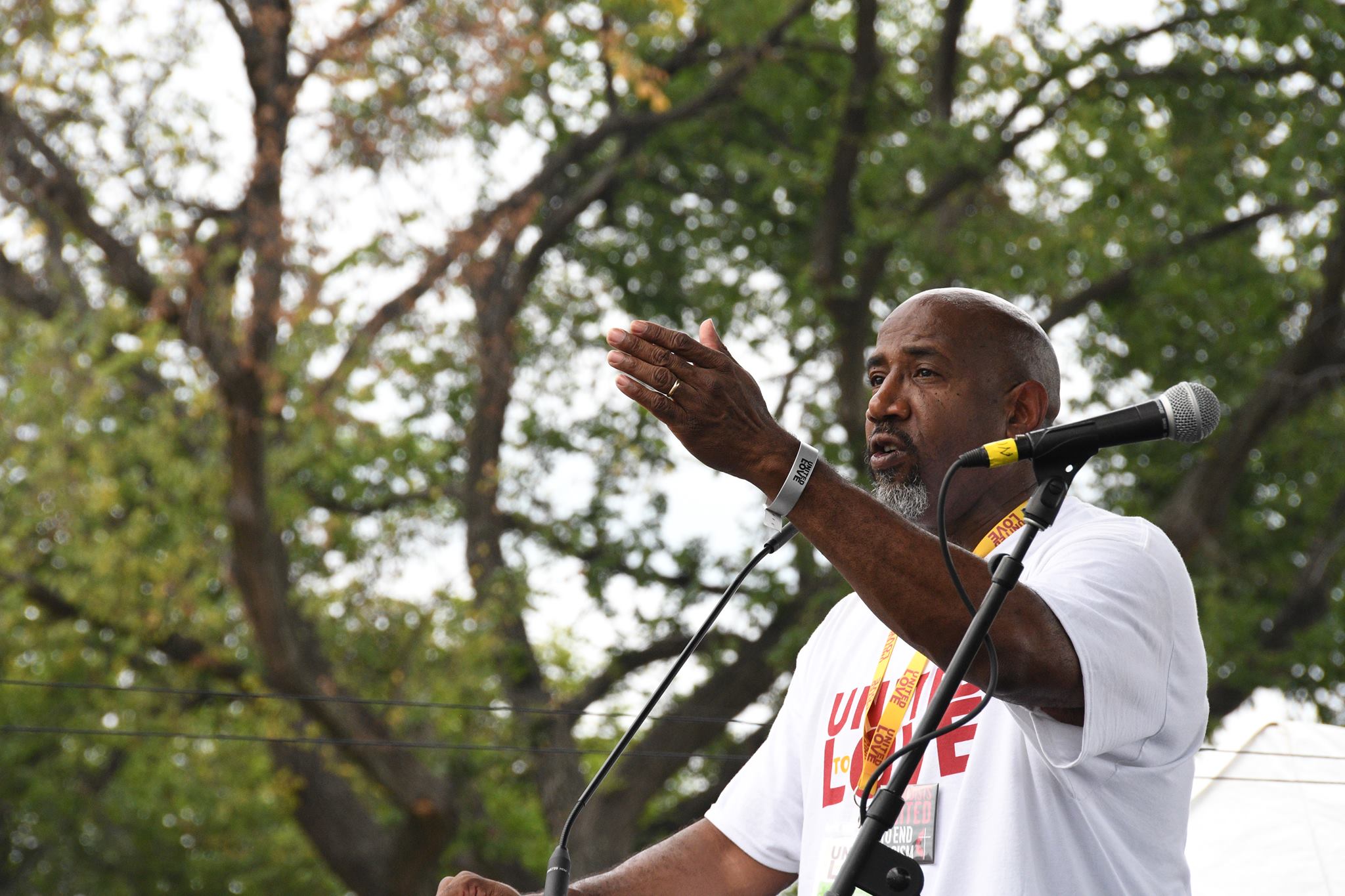 The Rev. Hannah Adair Bonner, a United Methodist pastor from Arizona, knows first-hand about this violence. Her life and safety were threatened as she held a vigil for Sandra Bland outside of the Waller County Jail in 2015.

“God sent me into what some saw as a gunfight with only a Bible and my guitar, and many thought I would not come of it on the other side, but perfect love casts out all fear,” she said.

Bonner warned about the threat of white supremacy, which digs its hooks into people’s souls. White supremacy “was the loom upon which the fabric of our nation was woven,” she said. “There is a part of all of us who rely upon it for our comfort that wonders whether the whole fabric of society will unravel if we pull out its threads. But we need to pull! that! thread! God can deal with what will happen. … We need a new garment. We need to be brave enough to see what God will do. We serve a God who is not afraid of unraveling.”

“My prayer is that we continue to move on,” said Cole Wilson, “as justice-seekers and justice-makers, ignited by a sense of call, united in love.”

Transcript of the Bishop's Sermon (PDF)