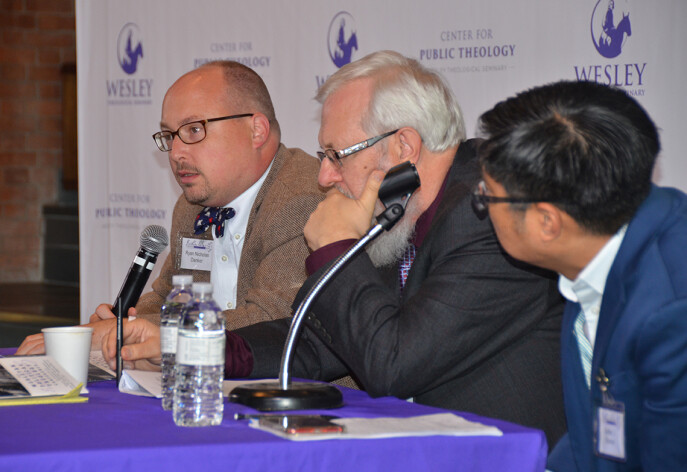 Ryan Danker, answers a question during the Political Theology Conference at Wesley Seminary. Next to him are William Abraham, center, and Luther Oconnor.

Our country and The United Methodist Church appear to be deeply divided. From ad hominem attacks published on Twitter from the top levels of government, to a Congress with near record-low approval ratings because of its inability to work together; from a society where people hide behind the anonymity of social media to churn out diatribes and hate speech, to a church that seems intent on forcing people to take sides as if there really was a difference between Greek and Jew, slave and free (Gal. 3:28), it has become increasingly difficult to talk – and listen – to one another.

That was the stimulus behind the Wesleyan Political Theology Conference, held at Wesley Theological Seminary in Washington, D.C., Oct. 26 and 27. The nine presenters and three respondents, along with more than 100 participants, met to try and answer the question, “What would John Wesley do in our political climate?”

An initiative of the seminary and its Center for Public Theology, Ryan Danker, Associate Professor of the History of Christianity and Methodist Studies at Wesley, convened the meeting of Wesleyan scholars from across the theological and political spectrum in the school’s Oxnam Chapel.

“I think this was a vital conference,” Danker said, “because it addresses an issue that people are asking whether or not they are Wesleyan: How do Christians engage within such a volatile, divided, divisive and somewhat aggressive context?”

The answers, as expected, ran the length and breadth of today’s thought.

Mike McCurry, who co-hosted the event with Danker and who is the Distinguished Professor of Public Theology at Wesley, started the presentations by exploring what it meant, to him, to be a Methodist in the public square.

“The church,” he said, “needs to offer some kind of response.” The former press spokesman for President Bill Clinton who still has deep ties to the Democratic Party, McCurry said that one of the problems he sees is that the conversations that happen in are not the same as the ones that happen when they get home.

“We need to bring the topics burning the public square to the center of the church,” he said, “where genuine and authentic debate can take place.”

For that to happen, he said, pastors are going to need to be skilled in leading those conversations. “The church,” McCurry said, “needs to be at the center of this ‘third place’ dialogue.”

On the other hand, James Thobeben, Dean of the School of Theology and Formation, and Professor of Bioethics and Social Ethics at Asbury Theological Seminary in Wilmore, Kentucky, argued that John Wesley himself, not being a political or systematic theologian, means that Methodists need to “pull back” from activism.

Wesley would argue, Thobeben said, that there’s a distinction between being made in the image of God (Imago Dei) and being a child of God. “One has different duties as a child of God,” he said.

William Abraham, the Albert Outler Professor of Wesley Studies at the Perkins School of Southern Methodist University, started his presentation by taking a note of the UMC’s mission statement which hints at social action. The addition of the words “for the transformation of the world,” he said, was added by the church’s Council of Bishops to the original wording, “To make disciples of Jesus Christ.”

The whole addition “has an air of theological comedy,” he said. “It takes us to the 60s, and suggests that our bishops can improve on our Lord’s own mission statement.”

The Rev. Lacey Warner, Associate Professor of the Practice of Evangelism and Methodist Studies at the Divinity School at Duke University, highlighted the lives of three southern women to shed light on the conference’s question. Dorothy Ripley, Belle Harris Bennet, and Mary McLeod Bethune all exemplified the Wesleyan combination of personal piety and social holiness, she said.

Ripley, who ministered to African slaves in the United States and met personally with President Thomas Jefferson, visited prisons and wrote against capital punishment. Bennet built schools and labored for social justice which combined with her evangelistic outreach, setting up “Bethlehem Houses” and “Wesley Houses” for the poor. And Bethune, Lacey said, is well-known for her political engagement and public contributions.

Other presenters during the conference included:

The president of Wesley, the Rev. David McAllister-Wilson, said that he was pleased with the diversity of voices presented during the conference.

“I think they laid a very helpful grounding for anyone, but especially for Wesley and our Center for Public Theology, as we seek to move confidently into the public square,” he said.

Danker said that he had a personal from the conference.

“I hope people leave thinking that we can actually discuss the politics of our day and not launch at each other or practice identity politics,” Danker said. “There are real disagreements amongst the speakers, respondents and the people here, and yet we’re talking about issues that matter to the American people and we’re doing it in a civil way. If Christians can’t do it, the world won’t be able to do it at all.”

Videos of the presentations are online.