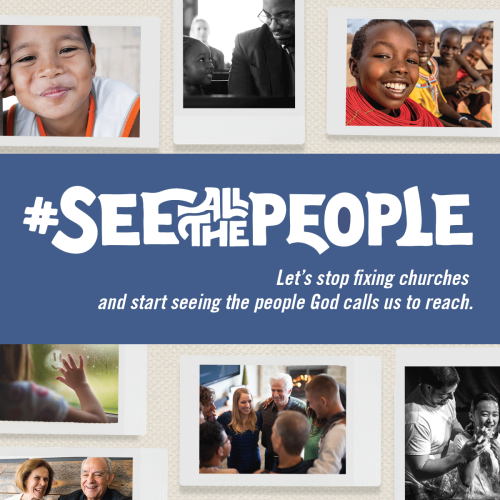 If you’ve been United Methodist for just about any length of time, you have heard the dismal news. Membership is down in the United States; worship attendance is suffering, too;   Sunday schools are all dwindling.

Many people and organizations are trying to stem the tide, and many resources have been developed over the years to try and stem the flow. A Google search on books or devoted to “fixing churches” returned more than 594,000 results.

So far — at least in The United Methodist Church — it’s not working.

Perhaps that was the genesis for the Rev. Junius Dotson, the top executive of Discipleship Ministries in Nashville, Tenn., who has a message for a struggling denomination: “Let’s   stop fixing churches and start seeing the people Christ called us to reach.”

Dotson made that declaration to the Discipleship Ministries board as he laid out his agency’s disciple-making strategies last March. The result? “See All the People.”

Taken from the old nursery rhyme that begins, “Here’s the church, here’s the steeple,” Dotson said that today, unfortunately, “Many churches might rewrite the rhyme’s ending:   ‘open the doors, where are all the people?’”

Changing the culture of a church is key, he said, from being inward focused to outward focused.

Changing the culture: from membership to discipleship

So, how does a church create or change its culture to one of disciple-making?

The Rev. Rodney Smothers is working on just that. The Director of Leadership and Congregational Development for the Baltimore-Washingon Conference, Smothers said that the starting point is Scripture, especially, for the BWC, Ephesians 4.

“That text frames various ministry aspects,” Smothers said. “It talks about , about commitment, and then it talks about building community. Those three ‘C’s’ are instrumental to what it means to create a discipleship culture.”

A discipleship culture is not a membership culture, Smothers stressed.

“When you have a membership culture, people are all over the place,” he said. “That’s because they’re not necessarily clear what their individual call is. That manifests by people ‘getting out of their lanes.’”

“Call is not limited to just clergy,” Smothers said. “Laity are called. We have to get people organized around ‘What am I called to do.’”

To assist people to discover and develop their call, churches need to use a discipleship system. However, most churches use a membership system. The two are not the same.

“A discipleship system cultivates paths to spiritual maturity,” Smothers said. “A membership system keeps training people to be immature: we give them a new position at the beginning of the year but we never give them any new revelation or manifestation of where they need to take whatever they’ve been called to.”

A member, Smothers said, is someone who joins an organization because of the privileges and benefits it offers. “A disciple, on the other hand, is one who becomes part of a movement because they are curious about what the movement is doing to impact others,” he said. “Members are turned inward; disciples are turned outward.”

Smothers pointed to Brooks UMC in St. Leonard as one example of what he’s talking about.

“We seek to equip, encourage, empower and ‘e’ disciples for Jesus Christ by Loving God, Loving People, Loving Self Loving Service,” he said.

The Brook operates a food pantry, partners with its neighbors at Waters Memorial UMC to provide weekend lunches for local school children and families, and every year sends people into the world to do mission work fully paid for by the church.

“For the last two years, they have done mission work in the Dominican Republic and I am proud to share that beginning in late 2017 we will be building at least two houses. These houses will be completely paid for by the church,” Robinson said. 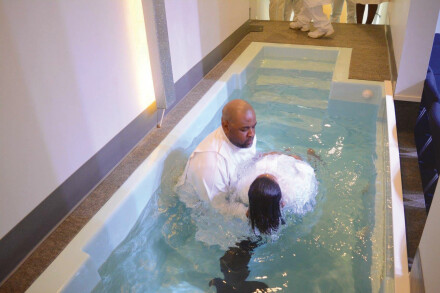 In 2016, The Brook moved into a new 12,453 square foot worship center, which includes a sanctuary that seats 465 and a state-of-the-art communication system. The fellowship hall seats 200 and there are four classrooms, a choir room, a hospitality suite, a baptismal pool, a finance room, two baptismal dressing rooms a pastoral rest area.

“The new worship center took a year and a month to build,” Robinson said. “The final cost was between $2.3 and $2.4 million. The main purpose of the worship center is to do exactly what the name implies — to worship the Lord in spirit and in truth.”

At The Brook, the discipleship system starts from the moment a person seeks to connect with the ministry. After indicating a desire for membership, Robinson said, people are greeted by the church family and escorted to the hospitality suite where they are met by both the lay leader and a member of the Reach Out & Touch ministry. They are assigned a mentor on the spot.

The following week, he said, they receive a letter from the pastor welcoming them and then the New Members Class coordinator contacts them to schedule them for a class.

“In New Members Class, you are also provided with a gifts inventory to indicate those areas where you feel you are most gifted to serve,” Robinson said. “The process is very swift and intentional. It is from there that we begin to measure discipleship through effective ministry.”

“The only real challenge that we have had to face about being intentional is to remove the culture of assumptions,” Robinson said. “That is, the church thinking that assumes that everybody knows the loves the Lord or wants to serve the Lord. We replace it with thoughtful communication and instruction about what church ministry and what discipleship are really all about.”

The biggest tip Robinson can offer?

“It is not about your religion but rather it is about ensuring of a relationship with Christ,” he said. “When ministries have vision (how we are going to do it) and mission statements (what we are called to do) that saturate and sit at the epicenter of the ministry and not just on a shelf, it helps create a culture that drives every aspect of said ministry. What churches are intentional about bears fruit.”

Smothers has a new book coming out next year, co-authored with the Rev. Candace Lewis, titled “Resurgence.” In it, they lift up many of the good things happening today in the Church.

“Even if you’re a downtown, old-line church, there’s still hope,” he said. “Take the best of what you’ve learned and it so that it’s culturally relevant.”