I am a lifelong Christian, but a brand-new Methodist. Last Easter, I became a member of Mount Vernon Place UMC in Washington. Although I have lived in D.C. for two decades and worked at multiple Christian organizations, I hadn’t managed to find that elusive faith community where I felt like I belonged. At Mount Vernon Place, I discovered the things I realized I was seeking in a congregation: a warm welcome and diversity within the congregation, preaching that both challenged and uplifted, and a commitment to social justice in word and deed.

I was especially drawn in by the book group that the church was launching, centered on racial reconciliation and inspired by Black Lives Matter. Several months into attending the book group – in fact, after I’d joined the church – I learned that Mount Vernon Place was originally built as the representative church of the Methodist Episcopal Church, South. I learned that this was the Methodist Church that decided to break away from the denomination before the Civil War so its members could continue to own slaves and still be good Methodist churchgoers. 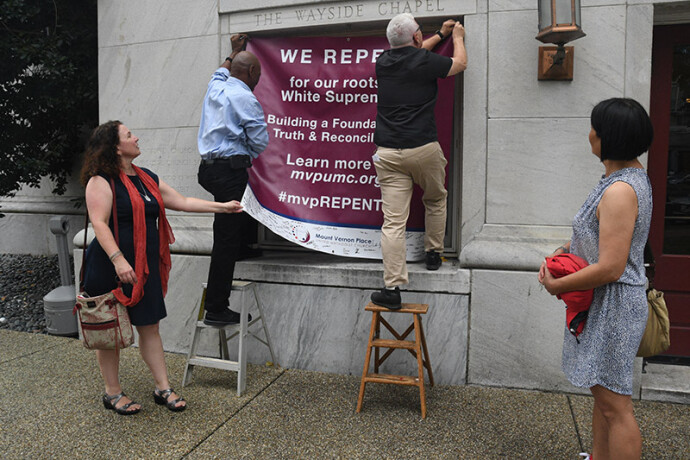 If I had known our history, I probably wouldn’t have visited Mount Vernon Place initially. I would have thought, I don’t want to belong to that kind of church. Those first impressions would have been because that’s not who the congregation is today. Yet our founding remains part of our history, one that we can’t overlook, but we might be able to overcome.

At our Sunday worship on Oct. 8, we commemorated the 100th anniversary of the laying of the cornerstone of our church. As we gave thanks for the beautiful building and the welcoming congregation—open to anyone and everyone—that our church has become, we also told the world our truth, announcing it with a banner hung outside for all to see.

We named the sin of racism and repented of our roots in white supremacy.

We repent because we follow a Savior who calls us to turn away from our sin, to start fresh. In the Gospel of Mark, Jesus began his public ministry with these words: “The time is fulfilled, and the kingdom of God has come near; repent, and believe in the good news.”

Here’s a confession: When I first learned about white privilege and white supremacy, I felt guilty about being white. But I’ve come to learn that guilt is not the point, and it’s certainly not helpful for where we are now. My faith as a Christian compels me to stand against injustice. One of our nation’s greatest injustices has been the way we’ve treated — the way we continue to treat — people of color, and in particular African Americans.

To be a member of an American Christian church today is to grapple with the sin of racism, or else to choose to ignore it through our silence. Our church’s founding gives us a unique opportunity to serve as a model for what it means to repent of racism. We have the chance to say, “This is who we were. this is who we want to be.”

The night before our service of repentance, once again, a crowd of white nationalists with torches marched in and pledged to keep coming back. I see those men who claim to be speaking out for white people — who claim they’re speaking for me — and I get so angry. I don’t want my anger to drive me to hate the men with torches, because that’s not any more productive than feeling guilty for being white. More importantly, that’s not who God calls me to be.

Mount Vernon Place is a church that’s no longer willing to be silent and complicit when it comes to racial injustice. I’m grateful I’ve joined a community of the faithful who realize that this struggle is not about the past. It’s about the lives that are at stake now. It’s about our own souls.

*Kimberly Burge is of the book, "The Born Frees: Writing with the Girls of Gugulethu."