By the Rev. Donna Claycomb Sokol 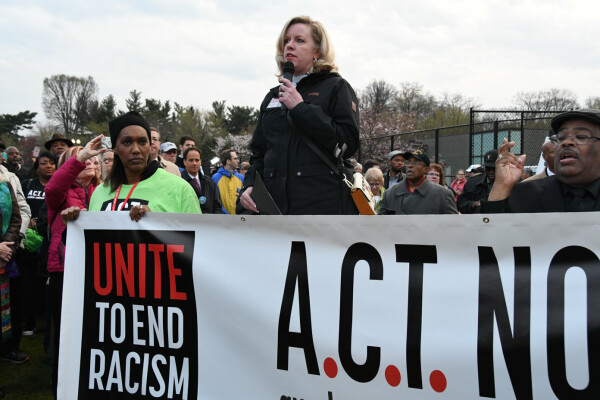 I arrived at the Martin Luther King Jr. Memorial before dawn last Wednesday, walked with other pilgrims to the National and listened to leaders urgently calling people to continue King’s work. The atmosphere was like a family reunion as we lined up for free Ben and Jerry’s while the two men, themselves, spoke from the stage. I returned to my office with a hopeful heart and opened a special edition of Time magazine on the life and legacy of the late civil rights leader.

Watch a short video of the event, produced by the BWC's Myca Jones, below.

One question surfaced as I turned the pages and looked at images of large crowds gathered to hear King speak, “Would I have been there?” Would I have been willing to march if I knew dogs might snag my pants after firehoses drenched my clothing? I wept when I realized the answer.

I was raised in the middle of America in a town with a park I was told to avoid. The caution had nothing to do with safety and everything to do with race. I cannot recall a person of color in my college graduating class. My young mind was not shaped by anyone with a skin color different than mine.

The church saved me — not by offering a first-class ticket to heaven in exchange for my sin — but by naming racism and helping me understand my privilege. The process began in seminary when I was required to take a course in black church studies and continued when I met a retired bishop from South Africa who taught about the church’s role in ending apartheid. Their lessons revealed how little I knew or understood about race while opening my eyes to the role the church must play.

I preached on Black Lives Matter for the first time as part of a sermon series on “The Politics of Jesus” in the fall of 2016. The sermon concluded, “I want to name our brokenness and then not pat myself on the back for preaching that black lives matter, but actually do something, because I’ve been reminded again this week that we cannot say, ‘I’m not a racist’ in one breath while continuing to accept economic, educational and justice systems that are. Will you be that church with me?”

One person said “yes,” accepting my invitation. Together we started a reading group, selecting Patricia Raybon’s “My First White Friend” as a starting point. A few people showed up, and additional books were chosen. The group has since read Timothy Tyson’s “The Blood of Emmett Till,” Ta-Nehisi Coates’ “Between the World and Me,” James Cone’s “The Cross and the Lynching Tree,” Matthew Desmond’s “Evicted” and Michael Eric Dyson’s “Tears We Cannot Stop.”

We then began to imagine what to do with our church’s history. We dug deeper into the archives, allowing historians to help us understand more about the creation of the Methodist Episcopal Church South. Then we wrestled with how to reconcile the gift of our glorious sanctuary building and the efforts to construct such a building to “represent” the denomination that broke off in support of slavery in 1844.

The calendar confirmed the 100th anniversary of the laying of the building’s cornerstone fell on a Sunday. A litany of remembrance and repentance was crafted for the anniversary. The unvarnished truth was told. The congregation sang “The Church’s One Foundation” just as individuals had done 100 years before. And members came forward to sign a banner to be hung outside: “We repent for our roots in white supremacy. Building a foundation of truth and reconciliation.”

The journey continued with 20 people participating in “Vital Conversations: Realities of Race and Racism,” curriculum created by the United Methodist Commission on Religion and Race.

We asked on the first night, “What would it take to have brave, difficult, meaningful conversations in our individual lives and in our church?” Some participants learned how race is a human construct, while others named where they witnessed white privilege in our conversations. The group concluded by naming how we refuse to be a moderate church when it comes to racial justice.

We are now preparing to start a small group on Scene on Radio’s “Seeing White” podcast. Another group will embrace Walter Brueggemann’s new study “Interrupting Silence: God’s Command to Speak Out,” as we seek to ensure our work is grounded in our call as disciples of Jesus.

The National Council of Churches extended the challenge to awaken, confront and transform.

Waking people to the realities of racism and white privilege is critical – especially in the church. People must be awakened before they will ever confront and ultimately transform injustice in our educational, economic, social and criminal systems.

Will you commit to doing all you can to awaken people in your community?

Our journey started with one person saying “Yes, I want to learn with you.” Will you extend a similar invitation your congregation? Will you read together? Will you distribute copies of Peggy McIntosh’s “White Privilege: Unpacking the Invisible Knapsack” and ask people to be aware of their privilege so they can work to resist it? Will you utilize the extraordinary resources offered by our denomination through the Vital Conversations series?

Will you then confront systems of injustice by holding elected officials accountable whenever you see them contributing to injustice? you question why some schools have more resources than more diverse schools in your community and then do something to ensure a redistribution of resources? Will you speak up when you see police brutality robbing the life of another African-American man, offer implicit bias training and participate in public activism?

I am profoundly grateful for the church that saved me. I now pray the universal church will do all it can to “resist evil, injustice oppression in whatever forms they present themselves.”

Will you join me?

Donna Claycomb Sokol is the pastor of Mount Vernon Place United Methodist Church in Washington, a church founded in 1850 as the “representative church” for the Methodist Episcopal Church South. She is the author of “A New Day in the City: Urban Church Revival.”