The April 1968 merger that created The United Methodist Church not only birthed a new denomination, it abolished a painful part of Methodist history: The Central Jurisdiction, which segregated African-Americans from their Methodist brethren. 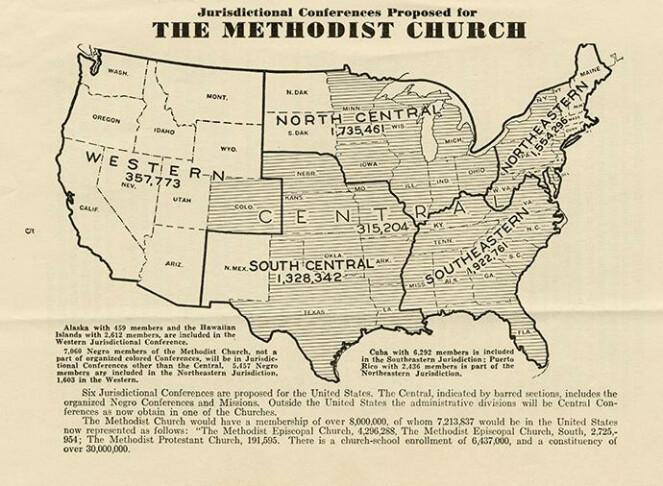 Map illustrating the proposed jurisdictional conferences for the 1939 merger creating the Methodist Church. Five of the jurisdictions are based on geography, while the shaded area representing the Central Jurisdiction would segregate African-American Methodists from the rest of the denominational structure. Map courtesy of Pitts Theology Library, Emory University.

Almost as soon as the Central Jurisdiction was established, attempts began to get rid of it.

Though the episcopal address to the 1940 General Conference alluded to black Methodists’ “cordial acceptance of the outcome” and urged delegates to “attempt no radical changes” to church structure, the 1944 General Conference appointed a commission to study race relations in the church. That commission’s report to the 1948 General Conference acknowledged the problem posed by discrimination and offered hope that it “shall ultimately be eliminated from our fellowship.” The report did not specifically suggest abolishing the Central Jurisdiction.

Amendment IX provided a means for a local church to transfer to another annual conference, or for a conference to transfer out of its jurisdiction. The proposal acknowledged that when all of the Central Jurisdiction’s conferences used this process to voluntarily transfer to other jurisdictions, it would in effect be abolished.

It seems a given that members of the Central Jurisdiction would have overwhelmingly supported its elimination, but that was not the case.

“Central Jurisdiction leadership supported Amendment IX but discouraged its strongest churches from leaving, for fears it would weaken us financially,” said retired Bishop Woodie W. White. “They didn’t want the jurisdiction to be weakened by attrition.”

Despite its segregated existence, the Central elected its own bishops, was given representation on church boards and commissions, and provided leadership opportunities that blacks may not have otherwise been granted.

At a 2004 reunion of Central Jurisdiction members, some spoke of those opportunities and the sense of family that was fostered within the segregated church body. Mai H. Gray, was a retired educator and former president
of the Women’s Division of the United Methodist Board of Global Ministries.
File photo by Mike DuBose, UMNS.

“If there was no Central Jurisdiction, a lot of our people wouldn’t have had opportunities for real leadership,” said Mai Gray. “This is where they honed their skills, even though it was not pleasant.” Gray, who passed away in 2010, became the first African-American to lead United Methodist Women in 1976.

Mollie Stewart, former president and CEO of Gulfside Assembly in Waveland, Mississippi, called the Central a “nurturing community, where everybody was your momma and your poppa.”

But at that same reunion, the Rev. Joseph Lowery laid out the complicated choice that faced African-American Methodists if the church were to desegregate.

“In the Central Jurisdiction, blacks elected their leadership. In a larger church, blacks don’t have enough members to elect leadership,” Lowery said. “The real power to elect black leadership (in an integrated church) rests in the hands of whites. That was the dilemma.”

The State of the Church report to the 1960 General Conference declared: “There must be no place in the Methodist Church for racial discrimination or forced segregation …. We recommend that discrimination or segregation by any method or practice, whether by conference structure or otherwise … be abolished with reasonable speed.”

In its report, the Commission to Study and Recommend Action Concerning the Jurisdictional System, noted the 1956 conference placed the Central Jurisdiction “in the line of ultimate extinction.”

The commission reported that six local churches had already transferred out of the Central Jurisdiction and 36 more were in the process. The commission took a wait-and-see approach to whether voluntary transfer via Amendment IX would solve the problem.

In a 2005 interview with United Methodist Communications, the late Bishop James S. Thomas said that “if you read the (legislative proposals) of 1964, the church was intensely concerned about segregation, but there were very strong efforts to hold on to the past.”

By this time, plans were well underway for the Methodist Church to merge with the Evangelical United Brethren. The EUB, which was not segregated, made it clear that the Methodists needed to resolve the issue. They ultimately made abolishing the segregated institution a condition for union.

The Commission on Interjurisdictional Relations’ report to the 1964 General Conference cited some positives — namely that the Central Jurisdiction allowed blacks to hold church leadership positions. However, the report also noted that it made Methodists “the only church in America which segregates, by its constitution, one sector of its membership on the basis of race.”

While hoping Amendment IX would dissolve the Central Jurisdiction, the commission did ask that if there were still conferences that had not transferred out by 1967, a formal termination of the jurisdiction by the end of 1968 should be enacted.

Dissatisfied with the passive recommendations of the committee, W. Astor Kirk, an alternate delegate from West Texas, introduced an amendment that stipulated “the Central Jurisdiction structure … not be made a part of the Plan of Merger.” It became known as the Kirk Amendment, passing 464 to 362.

The following year, Southern church leaders argued before the Judicial Council — the church’s top court — that jurisdictions had the right to preserve segregated conferences. Kirk prepared the brief opposing their stance, and the council decided in his favor.

Kirk passed away in 2011 after a lifetime of advocating for a more inclusive United Methodist Church. In a 2004 interview, he said, “My hope is that we can take the past as a guide and get beyond it and really begin within the UMC to interact with people just as people, without regard to race, color or gender.”

Moving toward integration, delegates approved a $20 million Temporary General Aid Fund to assist the Central Jurisdiction in raising the levels of pensions and minimum salaries. Salary assistance was supposed to steadily decrease over a 20-year period as the post-merger conferences got their financial footing.

“The efforts of the church to respond to the gap in income, pensions and health care of the black pastors of the Central Jurisdiction and the white pastors of the geographical jurisdictions was commendable,” said the Rev. Gilbert H. Caldwell, a civil rights pioneer and retired clergy member of the Rocky Mountain Conference. “My preacher father was one of those pastors.

By the 1968 Uniting Conference in Dallas, all that remained was to make official the elimination of the Central Jurisdiction. Still, some trepidation remained.

Retired Bishop Melvin Talbert said he favored doing away with the Central Jurisdiction until the time came to vote at General Conference.

“I voted against the merger because it gave the EUB everything they wanted while the black jurisdiction got nothing but a promise. There was no commitment to having a number of delegates; they just did away with it.”

“Only one jurisdiction was closed in 1968: the one that gave people of African-American descent power around appointment, around personnel, around vote, more power in voting our episcopacy,” said Vance Ross, director of annual conference relations at Discipleship Ministries. “That segment of people — my grandmother and her contemporaries — said, ‘We will stay and cause you to have to look at us and say you don’t love us, that we’re not equal.’”

White added that there was a risk of losing representatives at the agencies. “But they felt segregation was so untenable, they’d be willing to make that sacrifice,” White said.

A constitutional amendment was passed to “eliminate by 1972 any structure based on race.”
A minority report claimed there were still 11 black conferences that had not transferred out.

The Central Jurisdiction was no more. 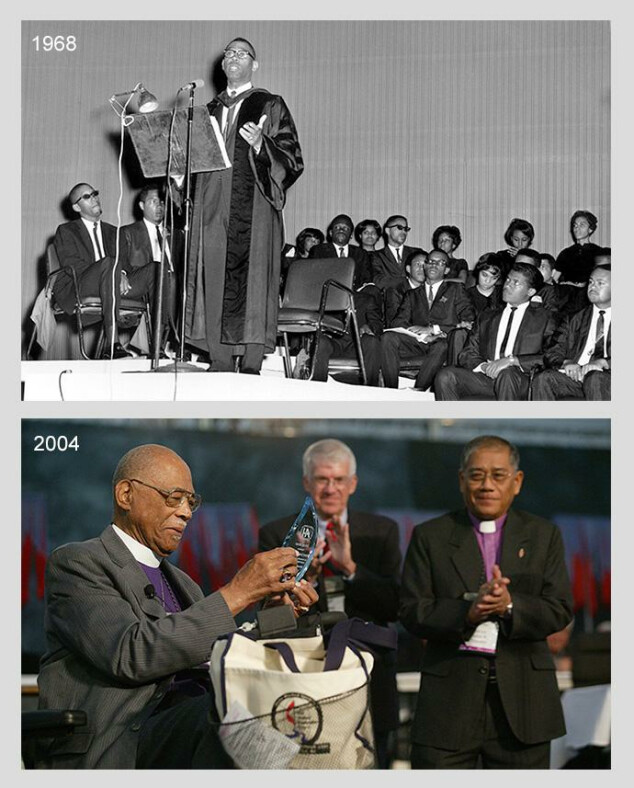 Above: Methodist Bishop James S. Thomas speaks during the 1968 Uniting Conference. Photo courtesy of the United Methodist Commission on Archives and History. Below: United Methodist Bishop James S. Thomas (left) is honored by the denomination's 2004 General Conference in Pittsburgh for the contributions he made in the former Central Jurisdiction of the church. Applauding Thomas are Charles Yrigoyen (left), top staff executive of the church's Commission on Archives and History, and Bishop Solito Kuramin Toquero. File photo by Mike DuBose, UMNS.

Bishop Thomas, who died in 2010, said, “There were those who thought the Central Jurisdiction would remain a permanent arrangement. We have to remember that every step toward eliminating segregation, from 1877 to 1968, in this nation and in the church was a difficult process. The U.S. didn’t do this easily, nor did the church.”

Much has been accomplished in terms of race relations in The United Methodist Church in the past 50 years, but many say there is always more work to be done.

Caldwell expressed some frustration that the church frequently lags behind society in terms of social progress.

“The Supreme Court ruled in 1954 (Brown v. Board of Education) that ‘separate but equal’ is invalid but our Central Jurisdiction was not officially dissolved until 1968,” he said. “Martin Luther King Jr. raised the question, ‘Why is the church always the tail light rather than the headlight?’”

Butler is a multimedia producer/editor for United Methodist News Service. Contact him at (615) 742-5470 or  . To read more United Methodist news, subscribe to the free Daily or Weekly Digests.