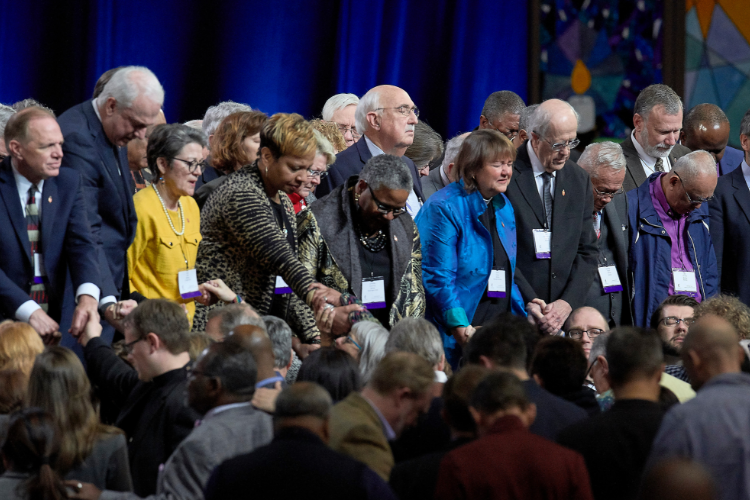 Bishop LaTrelle Easterling, center, joins with other bishops and delegates in a time of prayer during the 2019 Special  Session of General Conference. Photo courtesy of UMNS.

By Heather Hahn and Erik Alsgaard*

After four days of prayers, speeches, protests and votes, it remains to be seen whether The United Methodist Church has found a way forward on human sexuality and unity or remains stuck.

Still uncertain is how much of the legislation will take effect — or whether it will change the dynamic in places where a number of United Methodists, including entire annual conferences, openly defy these rules.

Late afternoon Feb. 26, delegates requested a declaratory decision by the Judicial Council on the constitutionality of the Traditional Plan.

The denomination’s top court will address the request at its next scheduled meeting April 23-25 in Evanston, Illinois.

The Rev. Gary Graves, secretary of General Conference, said any piece of legislation that the Judicial Council declares unconstitutional would not be included in the Book of Discipline, the denomination’s policy book.

Bishop LaTrelle Easterling said during a town hall meeting March 2 that, as a church, “We sit in the space of the already and the not yet. We are accustomed to that because we serve a Christ who died, who rose and yet will come again.”

This waiting, however, is not passive.

The Rev. David Simpson, a retired Elder from the BWC, attended the Special Session as an observer. He said that, as anticipated, it was painful.

“What we need to do now,” he said, moments after the conference adjourned, “is to go home and take the time to get ourselves re-centered as persons. After we’ve done that, then begin to council together… and begin to analyze what happened, what we might have done differently, and to ask the question, ‘Did we do enough to keep us together to continue dialogue’?”

“Let’s keep doing the things that God has called each of us to do individually, let’s engage each other with tenderness and gentleness; let’s do the missions… and keep trusting that God will raise up leaders who can figure this out.” 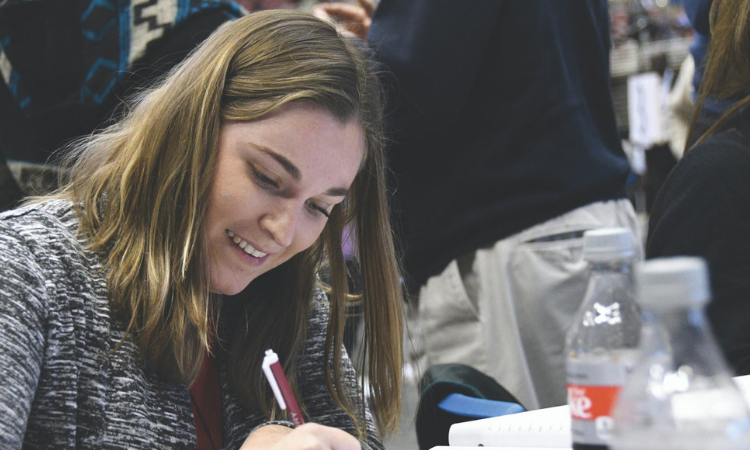 Kelly Robier (photo, left), a lay delegate to the Special Session, said that she was heartbroken by the actions of the conference.

Robier, a law student at American University, said that the message she was carrying back to her home church, St. Paul’s UMC in Kensington, was that she wasn’t going anywhere.

“We are here. We are fighting. We are not leaving,” she said.

TC Morrow, a candidate for ministry in the BWC for the past several years who has been denied ordination because she is a lesbian married to another woman, had hopes that this General Conference would be different. She came out of it disappointed, but God still had a word for her.

“I received a strong word during the day of prayer (Feb. 23) … and the words ‘stay the course’ came to me,” she said in the atrium of the Dome immediately after the conference ended. “Those are words that do not generally come to my mind, so regardless of what has happened here at General Conference, I head home with a strong message, ‘stay the course.”

The April meeting of Judicial Council’s will be its third review of the legislation to see if it is in line with the denomination’s constitution.

After some amendments to the plan, the General Conference on Feb. 25 asked the Judicial Council to review the legislation again. Early on Feb. 26, delegates learned the court — citing the same constitutional issues as before — ruled seven of the petitions unconstitutional and identified an unconstitutional sentence in another.

One of the petitions not included in the final package could have been far-reaching, requiring annual conferences to certify they would uphold the marriage and ordination prohibitions or leave the denomination.

The parts of the Traditional Plan that the Judicial Council has held constitutional include an augmented definition of “self-avowed practicing homosexual,” to say it includes people “living in a same-sex marriage, domestic partnership or civil union or is a person who publicly states she or he is a practicing homosexual.”

Also previously held constitutional is legislation that sets a minimum penalty for clergy performing a same-sex wedding of one year’s suspension without pay for the first offense and loss of credentials for the second.

*Hahn is a multimedia news reporter for United Methodist News Service. Alsgaard is managing editor for the UMConnection.

"It's time for the Church to be about Kingdom Building and nothingless!"