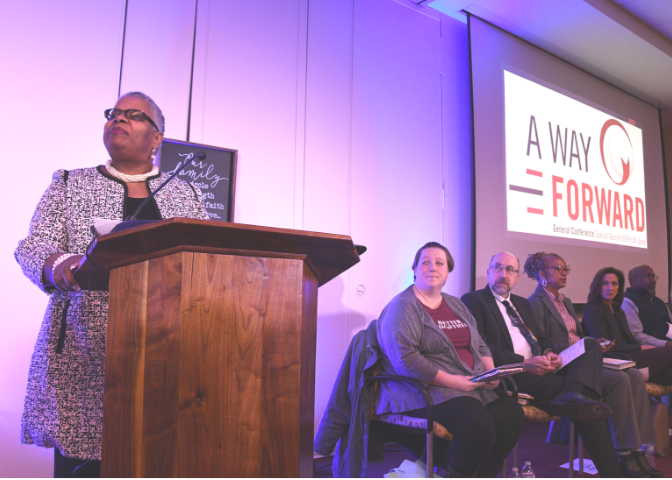 Bishop LaTrelle Easterling, left, speaks during a livestreamed Town Hall meeting March 2 at the Conference
Mission Center. More than 2,500 people watched all or part of the 3-hour event.

The impact and implications of decisions made at the recent Special Session of General Conference began to be explored in community in a live-streamed forum led by Bishop LaTrelle Easterling for the people of the Baltimore-Washington Conference on March 2.

At the Feb. 23-26 session, in an emotional debate on the church’s stance on homosexuality, 53 percent of the delegates voted to uphold the denomination’s current provisions banning gay clergy and same-gender weddings and to add stricter accountability standards. Delegates also adopted a “gracious exit” plan for churches wishing to leave the denomination.

These decisions will be reviewed in April by the Judicial Council, which will determine if they are constitutional. If they are found to be legally acceptable, parts of the Traditional Plan will go into effect Jan. 1, 2020.

At the March 2 event, which was recorded, Bishop Easterling said that United Methodists are in a liminal space in this particular time in history. “We sit in the space of the already and the not yet. We are accustomed to that because we serve a Christ who died, who rose and yet will come again.”

In a detailed analysis, Tom Starnes, the Conference Chancellor, provided a review of General Conference action. Most of what was adopted as the Traditional Plan, he pointed out, had already been declared unconstitutional. The Judicial Council will consider all the provisions again April 23-26. 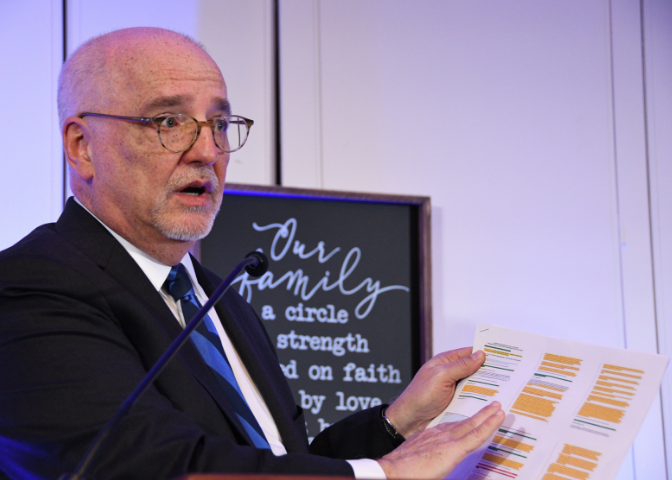 One item that was previously ruled constitutional was mandatory penalties for pastors performing same-gender unions. The first offense would result in a one-year suspension without pay and a second offence would result in termination of conference membership and the revocation of clergy credentials.

A second item that was adopted and is constitutional “tightens up language” about what it means to be a “self-avowed practicing homosexual,” Starnes said. The newly-approved definition includes people “living in a same-sex marriage, domestic partnership or civil union, or is a person who publicly states that she or he is a practicing homosexual.”

In the bishop’s sharing and in several prayers, the pain and anger being experienced by LGBTQ people were lifted up. “I have not met a single person who attended General Conference or watched it on live stream who was not deeply affected,” Easterling said.

No matter where you stand on the theological spectrum, “many have been wounded, many have been harmed.” And yet, the bishop said, “there is no equivalence of pain felt by those whose very being was at issue at this special called session.”

The bishop said it is her “earnest prayer that every lay person, every minister, every church will intentionally reach out to our gay, lesbian, bi-sexual, transgender and queer brothers and sisters to share the good news that they are loved and beloved by God. I hope we put flesh and bones on those words and live into them in the coming days. Please do not minimize, or attempt to silence, those in intangible, palpable and visceral pain. In the words of Zora Neale Hurston, 'If you are silent about your pain, they’ll kill you and say you enjoyed it.'”

The Rev. TR Chattin, the clergy head of the BWC delegation, expressed via video that this General Conference felt different than the eight others she had attended, starting in 1988.

“It had been my hope that this special session would have allowed us to be united,” she said. “For many of us the way forward from this conference is not entirely clear. My heart aches for the LGBTQIA community and for our fractured connection.

"The wounds of this conference cut me deeply. It is especially in these times that we need each other and need to be reminded of the unwavering presence of the God of life and love.”

However, Chattin said, the results of this conference might be a catalyst for action.

“Together as a conference, we have an opportunity to respond to our respective places of mission and ministry in love,” she said

At the forum, several others spoke out about the impact of the special session on their faith and ministry, including Megan Blizzard, a young adult from Westminster UMC, who read a letter signed by more than 15,000 young adults calling on the church to stop hate and allow all people to live fully into their identities as children of God.

The Rev. Joseph Daniels of Emory UMC, a five-time delegate to General Conference, urged those listening to recognize that this is not just about LGBTQ people, but is a broader issue of the oppression that includes race, ethnicity, gender, sexual orientation, class and more. Until the church addresses the broader issues of power, profit, property and control, “we will constantly come to moments like this and constantly witness the carnage of somebody,” he said.

Daniels urged members of the Baltimore-Washington Conference to embrace justice, as “the absence of oppression and the presence of peace,” recognizing the importance of both "soul justice and social justice.”

In a question and answer session, Bishop Easterling called on all present to take a time of discernment, self-care, deep reflection and sharing before reacting to any potential changes in the church.

She encouraged individuals and congregations considering withholding their tithes, offerings and mission shares not to “weaponize their stewardship and the gifts God has given them.” She also stressed the importance of every United Methodist church being open as a house of prayer to all people.

She encouraged everyone to remain open to the God of miracles and grace. “Never put a period where God has placed a comma,” she said.

In addition to 21 churches throughout Maryland, D.C. and West Virginia, the live-stream forum was watched by more than 2,500 people.

At the close of the three-hour forum at the Mission Center in Fulton, the bishop proclaimed the words of Ephesians about one Lord, one faith, one baptism.

Thanks for this summary of hope. I am somewhat encouraged that there may still be opportunities for the United Methodists to be God's Ambassadors to all people. All means " ALL" and that's all that all means.