What happens when local church leaders from the Baltimore-Washington Conference immerse themselves in learning how to plant new churches? Hopefully, multiplication. 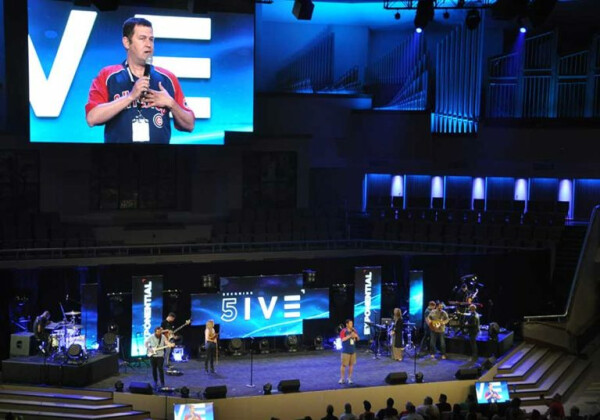 Exponential 2016, a three-day event at First Baptist Church in Orlando, Fla., drew more than 5,000 church planters from around the world, including more than 30 people from the BWC. The event focused around the theme “Becoming 5ive,” an allusion to five different types of church.

Level One, the conference leaders explained, is made up of Subtracting Churches, churches that are slowly dying. Level Two consists of Plateauing Churches that maintain the status quo. Level Three is what many churches aspire to be: Adding Churches that increase a member or two at a time. Level Four is the Reproducing Church, which focuses on multi-site congregations and perhaps planting a daughter congregation. Level Five is the Multiplying Church.

“Here is the truth,” said Dave Ferguson, president of the Exponential Conference. “There is more exponential potential for in one multiplying church than in 10 large growing churches.”

Growing churches, he said, can reach and care for thousands of people. Multiplying churches will care for hundreds of thousands. “It is only through multiplication that we will accomplish the mission that Jesus has put before us.”

When a parent has a child, that’s addition. When that child has a child, that’s multiplication, said Jim Tomberlin, the founder of MultiSite Solutions. Multiplying churches don’t focus on planting one new church or creating a new site as a way of growing. “They see every disciple as the seed of a new congregation.”

In addition, said Ferguson, these multiplying churches don’t just think about “here.” They add a “t” and a broad sense of daring; they care about “there.”

Creating this risk-taking, Gospel-centered culture of multiplication is one of the big dreams of the Office of Vibrant Communities in the Baltimore-Washington Conference.

Recent research shows that there only a handful of multiplying congregations in the United States. (A free online assessment tool of your church can be found at becomingfive.org.) However, those at Exponential believe they are launching a movement.

And one of the keys of that movement, said the Rev. Tony Love, BWC’s director of Vibrant Communities, is intentionality. “We must be intentional and be willing to give generously of our time, talent and resources if we truly seek to create a culture of growth and multiplication,” he said.

Currently, in the Baltimore-Washington Conference, no multiplying congregations and only a small number of reproducing churches have been identified. But Love is convinced that, with the assistance of the Holy Spirit, BWC churches can grow beyond scarcity thinking and even an attention on growth, and begin to focus on being a Kingdom movement.

“It’s not about seating capacity,” he said, echoing several of the Exponential speakers. “It’s about sending capacity.”

At the conference, Ed Stetzer shared several steps in becoming a multiplication church, which Love believes could be inspiring for any church, at any point in their spiritual journey. Among them:

It’s also important, Love said, to realize that the connectional system binds United Methodist churches together. “You don’t have to do this alone,” he said. The Office of Vibrant Communities offers assistance and resources for planting new churches and redeveloping existing churches.