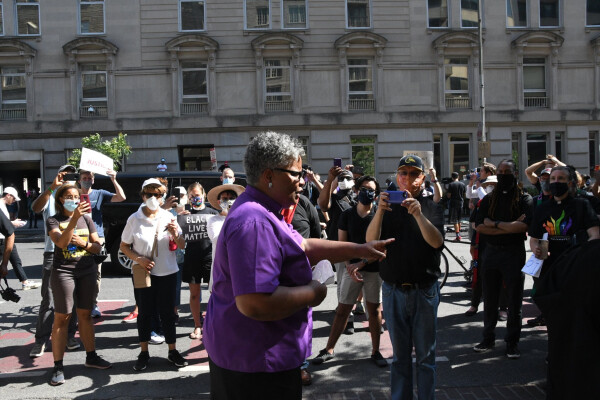 Bishop LaTrelle Easterling was scheduled to make remarks at the Interfaith Prayer Vigil in Washington, D.C. June 3. The vigil, which you can read about here, was interrupted. Below are her remarks.

I want to thank Bishop Mariann Budde for the invitation to participate in this vigil. May God bless and keep you.

To the families of George Floyd, Breonna Taylor, Ahmaud Arbery and so many others, I offer my deepest condolences.

On May 25, in Minneapolis, MN George Floyd was apprehended by officers and murdered on the street. On March 13, Breonna Taylor was killed in her home by police officers having committed no crime nor being sought under any warrant. On Sunday, February 23, Ahmaud Arbery was murdered on the streets of Brunswick, GA, by vigilantes who were not arrested for 74 days. All these individuals have in common is that they are Black.

Being Black is not a pre-existing condition; being Black is not justification for probable cause; being Black is not to be inherently suspicious nor suspect. Being Black is a gift from Almighty God and a manifestation of an aspect of God. This nation for 200 years enslaved Black and brown flesh for economic gain. The consequences of that enslavement, which in this case is the insidious ideology that some persons are less human than others, still infects the fabric of this nation. And to be clear, this racism is ungodly, unconstitutional and unpatriotic.

The inherent worth, dignity and sacredness of Black men, women and children is not debatable, nor do we need justification to exist and enjoy the foundational unalienable rights of this great nation. The Emancipation Proclamation was signed 155 years ago. 155 years is a long time to continue to strategically, systematically and intentionally get something wrong. Yet, as Dr. King notably taught, the time is always right to do what is right. As a bishop of The United Methodist Church, as citizen of this country, and as a mother, I demand that the leaders of this country and all of her institutions finally do what is right, which is to live her creed, uphold the rights established in her founding documents and the amendment that abolished the enslavement of God-breathed flesh. On behalf of those who have and are suffering under unjust laws, policies and practices, I demand that every elected official, every police chief and those within the judicial system root out the demons of racism, classism and systemic oppression, and that all religious leaders teach the precepts contained in the Hebrew Bible and the New Testament that all flesh is equal and that racism is sin.

For a veteran officer to continue to leverage his full body weight on the neck of another human being as the man repeatedly stated he could not breathe, gasped for air, and called for his mother is abhorrent. It was not done to enforce nor uphold the law. It was done to send the same message of terror that was being communicated through the whip, through lynchings, Jim Crow, and acts such as the Tulsa race massacre - that you had better remain in your place of subservience. But today, I extol the sacred message God spoke when God breathed life into dust, the message continued when Jesus the Christ opened the scroll and proclaimed good news to the poor, freedom for the prisoners, recovery of sight for the blind and that the oppressed be freed. The message expressed at this nation’s founding that all men and women are created equal and again demand that this country root out the structural sin of institutional racism and white supremacy.

It is time for this nation to be both cognizant and conscious. It is possible to be cognizant of an issue, challenge or problem without being conscious of one’s role or complicity therein. The architecture of whiteness and white supremacy is only maintained by the silence, complicity and support of persons of privilege in this country. It is not enough to say I am not a racist. If you have not committed to the practice of being an anti-racist, then you are complicit in racism. The UMC states in her social principles that we condemn racism, ethnocentrism, tribalism and any other ideology that believes one group of human beings is superior to any other. We utterly reject laws, policies and social practices that marginalize, discriminate and/or encourage the use of violence against individuals, communities or other social groups based on perceived racial, ethnic or tribal differences.

The time is now. Dismantle the architecture of whiteness and white supremacy; stop creating, implementing and supporting policies that perpetuate economic injustice; stop the dog-whistle political maneuverings which incite violence against people of color; commit to being an anti-racist;  stop over-policing Black and brown bodies; stop using deadly force in ordinary police interactions with Black and brown people. Stop killing us!