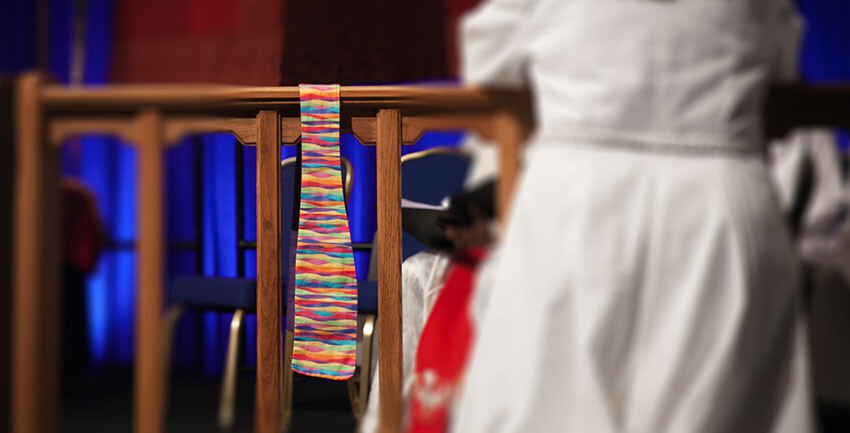 Why all the fuss? What’s so terribly wrong with T.C. Morrow?

In the past, I served on our Conference’s Board of Ordained Ministry, and in that time, I considered many candidates for ministry. T.C. stands out as a uniquely qualified, exemplary candidate for Deacon. She has demonstrated outstanding Christian character. She is deeply committed to Jesus Christ and his church. T. C. is already a model of what Deacon ministry is all about while serving as a leader in her local church and working for the National Religious Campaign Against Torture in Washington, D.C.

T.C. graduated from seminary and passed through the rigorous district and conference candidacy process with flying colors. As a Deacon, she would continue in the call God has already given her.

Ordinarily, T.C. Morrow would be a person any Annual Conference would enthusiastically commission and ordain into ministry.

But there’s just one thing...

T.C. is a woman married to another woman. And in our Book of Discipline, recently clarified by Judicial Council decisions, this one thing disqualifies her from candidacy, commissioning, or ordination as a clergyperson in The United Methodist Church.

If we were to put aside T.C.’s sexual orientation for just a moment, I would be writing about the Rev. T.C. Morrow. Yet church law has made this impossible. To quote the former Rev. J. Phillip Wogaman, it’s “bad church law.”

Our inability and unwillingness to commission and ordain someone like T.C. Morrow is a glaring example of an entrenched injustice propped up by poor biblical theology.

Now before I go on to explain my claim, let me say that I have traditionally stood right of center on the issues surrounding gay and lesbian people. This is for no other reason than the fact that I take the Bible — the whole Bible — seriously. I do not dismiss scriptures that make me uneasy or challenge my assumptions. It’s all God’s inspired Word to be read, believed, and lived out. That said, the few times that the Bible does mention homosexuality, it’s always a condemnation. Meanwhile, the Bible consistently lifts up heterosexuality as the established norm.

Case in point: let’s take another look at one of the strongest biblical condemnations of homosexual sex in the Bible.

The wrath of God is being revealed from heaven against all the godlessness and wickedness of people, who suppress the truth by their since what may be known about God is plain to them, because God has made it plain to them. For since the creation of the world God’s invisible qualities—his eternal power and divine nature—have been clearly seen, being understood from what has been made, so that people are without excuse.

For although they knew God, they neither glorified him as God nor gave thanks to him, but their thinking became futile and their foolish hearts were darkened. Although they claimed to be wise, they became fools and exchanged the glory of the immortal God for images made to look like a mortal human being and birds and animals and reptiles.

Therefore, God gave them over in the sinful desires of their hearts to sexual impurity for the degrading of their bodies with one another. They exchanged the truth about God for a and worshiped and served created things rather than the Creator—who is forever praised. Amen.

Because of this, God gave them over to shameful lusts. Even their women exchanged natural sexual relations for unnatural ones. In the same the men also abandoned natural relations with women and were inflamed with lust for one another. Men committed shameful acts with other and received in themselves the due penalty for their error.

Furthermore, just as they did not think it worthwhile to retain the knowledge of God, so God gave them over to a depraved so that they do what ought not to be done. They have become filled with every kind of wickedness, evil, greed depravity. They are full of envy, murder, strife, deceit malice. They are gossips, slanderers, God-haters, insolent, arrogant and boastful; they invent ways of doing evil; they disobey their parents; they have no understanding, no fidelity, no love, no mercy. Although they know God’s righteous decree that those who do such things deserve death, they not only continue to do these very things but also approve of those who practice them.

Writing to the church in Rome, Paul was describing the full impact of turning away from God to engage in idol worship. God’s wrath against idolaters is to “give them over” to the worst aspects of human depravity. Among the worst examples of human depravity was men and women, inflamed with lust, who exchanged natural sexual relations with one another to engage in “shameful acts” of orgiastic sex with people of the same gender. Most likely, Paul was referencing Greek and Roman temple prostitution in which it was not uncommon for visitors to engage in cultic sexual acts. It was another form of leisurely entertainment.

Then Paul lists off a whole litany of acts resulting from a depraved mind void of “the knowledge of God.”

I fully agree with Paul’s assessment. Any people or society who abandons God and God’s ways devolves into the worst of sexual and moral depravity. They are allowed to ruin themselves, and we see clear examples of that all around us.

Back to T.C. Morrow and other lesbian and gay Christians. Only the worst of biblical hermeneutics would suggest that somehow they fit the mold of human depravity Paul was describing in Romans 1. T.C. is a worshipper and servant of God, a baptized member of The United Methodist Church and a disciple of Jesus Christ whose life emulates the best of Christ-like character. In terms of her sexual orientation, she is legally married. She and her wife foster children who otherwise would not have a home. In the midst of the controversy surrounding her candidacy, T.C. has carried herself with a gracious courage embodying the very character of Jesus when he faced opposition and persecution.

Still, let’s say that the Bible does not outright condemn T.C.’s marriage, does it make room for gay and lesbian marriages, especially since the commended, normative form of human sexuality is heterosexual? My short answer is yes. First, there are many things we do and believe that the Bible does not specifically commend. Most Christians hold to creeds and traditions that are not commended in Scripture. For example, the Bible does not mention Lent, and yet most Christians adhere to that tradition. The Bible never mentions or spells out the Trinity, and yet where would our theology be today without the classic Christian doctrine of the Triune God?

Yet the Bible does commend faithfulness, loyalty, purity, and covenant — qualities which so many married gay and lesbian Christians uphold and model.

Furthermore, the overall trajectory of the Bible is towards an inclusive community, a community in which those who were previously denounced as unclean or unworthy are brought into the community of God’s people as valued equals. Jesus shared table fellowship with tax collectors and sinners. The Apostle Paul asks his friend Philemon to welcome back a runaway slave “no longer as a slave, but better than a slave, as a dear brother” (Philemon 16).

In a beautiful passage from Isaiah,

Let no foreigner who is bound to the LORD say, “The LORD will surely exclude me from his people.” And let no eunuch complain, “I am only a dry tree.” For this is what the LORD says: “To the eunuchs who keep my Sabbaths, who choose what pleases me and hold fast to my covenant— to them I will give within my temple and its walls a memorial and a name better than sons and daughters; I will give them an everlasting name that will endure forever. And foreigners who bind themselves to the LORD to minister to him, to love the name of the LORD, and to be his servants, all who keep the Sabbath without desecrating it and who hold fast to my covenant— these I will bring to my holy mountain and give them joy in my house of prayer. Their burnt offerings and sacrifices will be accepted on my altar; for my house will be called a house of prayer for all nations.”

For someone like T.C., a woman in a married relationship with another woman, a disciple of Jesus who exudes Christ-like qualities, gifts, and graces, how could God not embrace her as an equal, fully valued part of Christ’s church? Whether we acknowledge it or not, God already has.

And if God has accepted T.C. as an equal, fully valued part of Christ’s body, then let’s be done with bad church law and commission her as a Provisional Deacon in The United Methodist Church. Until that day, I stand with T.C. Morrow and others like her who are being unjustly barred from God’s call to a life of ordained ministry in Christ’s church.

*The Rev. Chris Owens is pastor of Trinity UMC in Annapolis. You can read his blog at pastorchrisowens.wordpress.com. This article re-posted by permission.