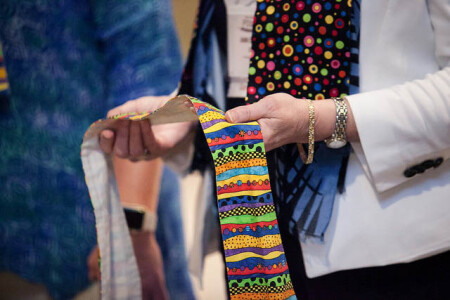 Supporters of full inclusion for LGBTQ clergy wore rainbow-colored stoles throughout Annual Conference. Several gathered in the hotel’s main lobby area as a witness to their cause June 3.

Clergy members of the Baltimore-Washington Annual Conference, meeting June 1 in an Executive Session, did not approve Tara “T.C.” Morrow for commissioning as a Deacon in The United Methodist Church.

Morrow failed to receive the needed two-thirds vote for approval.

Morrow, a woman married to another woman, became a litmus test in a denomination struggling with the issue of ordaining and commissioning homosexuals.

The United Methodist Church, in its Book of Discipline, does not allow “self-avowed, practicing homosexuals” to be ordained.

The Rev. Charles Parker, chair of the Board of Ordained Ministry (BOOM) for the BWC, brought the report that recommended Morrow for commissioning. Earlier, Parker had released a statement on behalf of the Board, stating that the board did not inquire about sexual practice for any candidate.

Bishop Marcus Matthews called for United Methodists to be in a time of prayer following the clergy meeting. He called for prayers for Morrow, her family, for leaders of the Baltimore-Washington Conference, and for the unity of the church as it continues to seek God’s will. 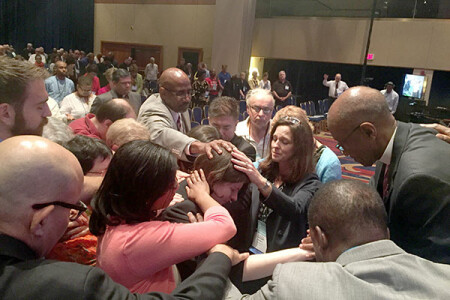 Clergy members surround T.C. Morrow in prayer following the vote not to commission her.

Following the decision, Morrow issued a statement: “While I am saddened that the full clergy session did not affirm the BOOM’s recommendation, I appreciate the BOOM’s openness and transparency related to my candidacy. I hope such openness may be an example as the Council of Bishops moves forward with a commission to study and possibly offer of the parts of the United Methodist Book of Discipline related to ‘human sexuality.’ As we know well, discussions of how to work with LGBTQ clergy and clergy candidates are not abstract discussions.  We are talking about real lives, real people who are called by God to leadership in the church.”

At the 2016 General Conference, which ended May 20, the church delayed any decisions on human sexuality at the invitation of the denomination’s Council of Bishops. Instead, a special committee will be established by the bishops to study the issues and report back.

“The really unfortunate thing that struck me about the arguments and demonstrations at this year’s Annual Conference,” said the Rev. Robert Barnes, pastor at Glen Burnie UMC, “is that so many United Methodists have been taught to speak and act as if we are not an open and inclusive church, just because they don’t agree with one part of the covenant that governs our life together.”

The Rev. Steve Tillett, of Asbury-Broadneck UMC in Annapolis, said he was conflicted about the decision.

“On the one hand, I know what the Bible says and am well acquainted with what the Discipline has to say about homosexuality,” he said. “On the other hand, it seems to me that Morrow’s biggest ‘offense’ was being and completely candid with letting us know the totality of who she is.

“I think most of us are well aware that we have had (and still have) people who are homosexual serving at every level of ministry in this church both laity and ordained,” Tillett said. “And if we’re going be honest, most of us also have friends and family and congregation members who are gay, as well. If nothing else, that reality should convince us that these people are NOT the devil, they are merely human beings, just like the rest of us, ‘going on to perfection’ by God’s grace.”

Speaking at the Baltimore-Washington Area Reconciling United Methodists (BWARM) dinner June 2, Morrow said that she is staying in the church, for now, because for her, the church is a family.

“I grew up in The United Methodist Church,” she said. “To go from coming out to my parents in the late 90s to yesterday, where I got 61 percent of the vote, is an affirmation of my call to ministry.”

Morrow said she is feeling called to stay in the struggle for full inclusion of LGBTQ people in the church. “Part of my call is to be a voice for human rights,” she said. Morrow has worked at the National Religious Campaign Against Torture for the past six years. She graduated from Wesley Theological Seminary 11 years ago.

Morrow said that she is always thinking about that “13 or 14-year old kid in Oklahoma, in a church, and what are they hearing,” so that they would know that there are people like her in the church, “at least somewhere.”

“Not everyone is called to this path,” she said. “But I’m staying to be a witness and a presence.”

The National Religious Campaign Against a statement lamenting the decision. Other statements came from Foundry UMC, where Morrow is a member; BWARM, the Baltimore-Washington Area Reconciling Ministries network; 13 members of the 2016 ordination class; and several students who graduated with Morrow from Wesley Theological Seminary.

Following the ordination and commissioning service June 4, Morrow came forward in response to an invitation to those feeling a call for ordained ministry.