Every church in the Baltimore-Washington Conference has a deed, a legal document pertaining to property rights and ownership. The language in those deeds, as far as United Methodist churches go, often centers around the “Trust Clause.”

“All properties of United Methodist local churches and other United Methodist agencies and institutions are held, in trust, for the benefit of the entire denomination, and ownership and usage of church property is subject to the Discipline.” (¶2501, Book of Discipline.)

The Rev. Frankie Revell, the pastor at LaVale UMC near Cumberland, went looking for that trust clause when he started serving the church six years ago. Every church he has served, he reads the deed of the church looking for that language. When he found it in the church’s deed, he stopped reading. What he didn’t read in the deed is some very troubling language.

Watch the interview with Rev. Revell

“It is further covenanted and agreed that said property hereby conveyed shall never be sold to or occupied by anybody other than persons of the Caucasian (white) race.”

That racist language was inserted in the deed in 1948. Revell became aware of it when a community member brought it to his attention.

Revell, an accomplished banjo player, was playing at an open mic session at a local library. Dr. Lynn Bowman, a professor at Allegheny College in Maryland, approached him after learning that he was the pastor at LaVale UMC.

“We should really talk,” she said. Revell said, “sure. What about?” She told him about the deed.

Revell ended up inviting Bowman to speak at his church as part of a teaching series, “Letting Go of Jim Crow.” She also spoke at his Sunday school class.

“People’s reactions were that ‘this doesn’t really hold water today,’” said Revell. But, he added, he didn’t get the response he was looking for. Only a handful of people were appalled at the language and wanted to change it.

And so Revell began to think strategically about his next steps, he said. He mentioned it in sermons several times. Two direct descendants of the family that donated the property for the church – and who had inserted the language in the deed – were still members of the church. “I did not want to bring dishonor upon them in any way,” Revell said.

He also didn’t want to simply “erase the language,” he said. “You can’t erase the pain that this has caused.”

And then the death of George Floyd happened. Watching that video shook Revell to his core. He coupled that with the images of the president standing with a Bible in front of St. John’s Episcopal Church in Washington, D.C. “I saw two different visions for the future of America playing out,” he said. “Which side are you going to be on?”

Prompted by the Holy Spirit, Revell said he could not remain silent. He took to Facebook to talk about those circumstances, and then about the church’s deed.

Revell has “every confidence” that the church will change the deed. “It’s what we need to do,” he said. But when they do, he understands that new language can be added. The old deed stays as a historical document, he said, but more inclusive language can be added. The question for the church right now, he said: what do they want in that new language?

At Asbury UMC in Arnold, the Rev. Jennifer Karsner, Lead Pastor, learned about similar language in her church’s deed when her trustee chair found it and brought it to her attention about a year ago. 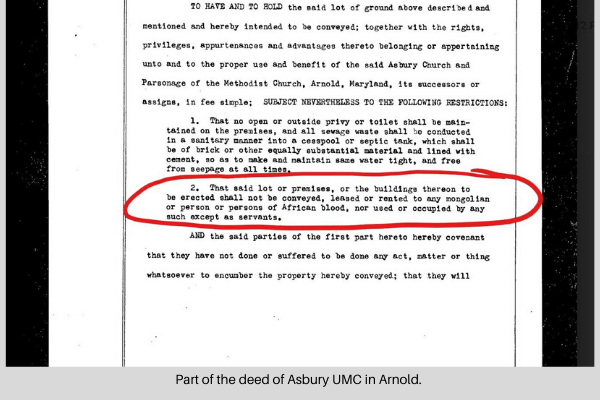 The restriction on her church’s deed reads, “That said lot or premises, or the buildings thereon to be erected shall not be conveyed, leased or rented to any mongolian (sic) or person or persons of African blood, nor be used or occupied by any such except as servants.” The deed is dated 1956.

“When we first found out, the trustee chair and I were both shocked and appalled,” Karsner said. “But honestly, we did not do anything else about it because we knew the language would not legally hold up any longer.”

“We were worshiping over Zoom so I had my tech person share a picture of that portion of the deed and explained what it said,” Karsner said. “The congregation was shocked and appalled.”

Karsner said that some people have asked if they can have the language legally removed. In her opinion, removing the language is an important symbolic move, “but it's not the most important work that needs to be done. We have work we need to do before we change the deed. We have to, as Bishop Easterling said, understand why that language was there in the first place, what it meant, and how we shift our mentality and our behavior to reflect a different reality. Then we can change the language as a way of recognizing the inner transformation in the community.”

To that end, some of the church’s groups are studying various racial justice books, and many individuals are reading and educating themselves. The church council, Karsner added, has committed to reading "How to be an Anti-Racist" by Ibram X. Kendi and is inviting others to read it as well. After they read the book, they will have further discussion as a council at their meeting this month about signing on to be an anti-racist church.

“While I wish it was self-evident that of course we would want to be an anti-racist church and we could make that commitment immediately, the council has chosen to move slower,” she said. “One of the things I love about this congregation is that they take their commitments seriously. So, they want to understand what they are committing to and be prayerfully discerning before making the commitment.”

Karsner said that the church is in the beginning stages of coming up with a process to learn and understand. The deed, she said, might also be a prompt from God “to listen to how God might be asking us to be a part of her transformative work in the community beyond changing the lease. Maybe God will use this time to break Asbury's heart over issues like affordable housing, or the school to prison pipeline.”

Revell said that one of the things he’s learned by going through this process is becoming more aware of the many different ways racism and White supremacy can fester in theology, in the church, and in society.

“This is not political,” Revell posted on his Facebook page. “It is a matter of right and wrong. It is unacceptable to stay silent in the face of injustice. It is not enough for churches to simply denounce racism and white supremacy with empty words. Churches must be at the forefront of combating racism and white supremacy with head-on action. Our minority brothers and sisters as well as younger generations are looking upon us to lead on these issues (and) not sit meekly in the background as events transpire around us. Let us not fail them.”

Commit to being an ant-racist church. Sign the pledge here.

A 1948 U.S. Supreme Court decision ruled that any deed restrictions against selling to people of any race are illegal and invalid. During the 1930s and 1940s in Chicago's south side, those deed restrictions were standard practice in the white neighborhoods. The 1948 ruling caused drastic change in the south side of Chicago. Today, most of southeast Chicago is black.

Again and again we are bringing up something that was wrong at the time it was instituted and people of all races recognize this. We have grown as a society and as stated in the article these statements no longer are legal. This is not where we are at today and we also need to realize that. Let’s not continue to look back at a shameful past but begin to talk about the present and how we have worked together to remove this type of belief or behaviour. What we really need to discuss is justice and love not only for minorities but for all people as God asks of us. We must be very careful about what the UMC supports and what may be the consequences of that support. Support of “Black Lives Matter” organization may well be leading us into a deeper divide instead of a healing. The statement BLM should be changed to something that is not tied to the radical, political organization that exist to perpetuate racism, not erase it. There is no doubt that all black lives matter as well as all human lives. That is not debatable. Let’s celebrate the progress we have made and pray that our love for each other and understanding of the plight of of our brothers and sisters continue to grow so that we can better serve our risen Lord as he asked. Let’s not tie ourself to political groups that would try to split us instead of gather us together for God’s work. Let’ rise to the occasion and continue to have the conversations surrounding justice and personal responsibilities and accountability of which the last two we are personally responsible for.

I am 71 years old and was a life-long Methodist until two years ago when I pulled my membership for many reasons, but mainly because the UMC does not look to the absolute authority of the scriptures as a church of Jesus Christ. I was not a pew sitter but was actively engaged in the ministries of the church for my entire life when Jesus was the priority.
Reading this article has only reaffirmed that I made the decision to leave a church that continually focuses on dividing people along the lines of gender, race, perceived injustices, and the authority of the scriptures. Jesus spoke about division when they accused Him of driving out demons through the power of Satan. Abraham Lincoln, who gave his life to free the slaves but has also come under attack with his memorial being desecrated, stated that a nation divided against itself cannot stand. I am looking forward to seeing Mr. Lincoln when I get to heaven.
No one living today had anything to do with slavery. It is history. What is happening today is revenge for what happened two hundred years ago. Energy and resources that should be used for winning souls for Jesus Christ are instead being used to demean the white race and to incite division among those who never thought about racism and only recognized all people as one, people created by a loving God who will one day show His wrath against a nation of hatred that long ago considered Him irrelevant. May God have mercy on us all.