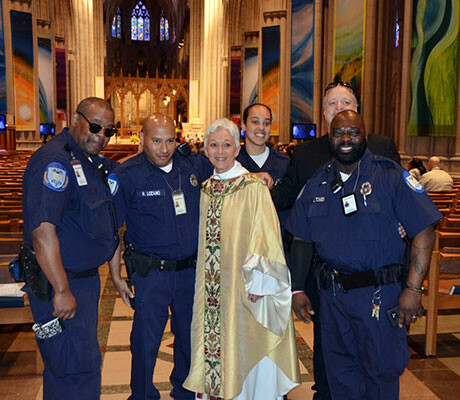 The Rev. Gina Campbell, center, stands with members of the Security Team at Washington National Cathedral on April 17. Campbell, who is the first non-Episcopalian to serve as worship director at the Cathedral, is leaving her post after 8 years.

In the “Welcome” pamphlet handed out every Sunday at the Washington National Cathedral, the first line states that, at its heart, the Cathedral is “a community at worship.”

For the past eight years – the past five as its director – the Rev. Gina Campbell, a United Methodist Elder, has had a hand in putting together worship services in the massive, 2,000 gothic structure, where the president and the nation come to pray during times of national tragedy and triumph.

On April 17, Campbell was honored for her service during a worship service she helped design.  She is the first non-Episcopalian worship director at the Cathedral, the seat for the Episcopal bishop in Washington.

Beginning July 1, Campbell will be the visiting professor of worship at Wesley Theological Seminary in Washington. She will also serve as the “chapel Elder,” she said, helping to facilitate and plan the worship for the seminary community when it gathers.

“It’s a little surreal,” Campbell said after the morning worship service. “I haven’t quite taken in that I won’t be in this building in the same way again.”

Campbell said that her position requires “a lot of hours” being in the building. It was no accident that she posed for a photograph with the security guards at the Cathedral.

“I work really late at night,” Campbell said. “I’m almost always the last person to leave the building and they drive me to my car because it’s not totally safe for me to walk around outside at 2 o’clock in the morning.”

Also, she said, during the Muslim prayer service, there were a lot of threats made and the guards “took such gentle care of me,” she said.

One of the moments that stands out for Campbell in her time at the Cathedral is that Muslim prayer service, which happened in the upper transept.

“It was a difficult service to make happen, given the kind of resistance that came from various groups,” Campbell said. “The Muslims, themselves, were lovely people to partner with and the strength of the relationships that came out of that, you saw it this morning.”

Campbell was referring to the ecumenical nature of her final 11:15 a.m. worship service. Prayers were offered and sacred texts were read in Hebrew by Rabbi Bruce Kahn of Temple Shalom in Chevy Chase, and Imam Talib Shareef of the Nation’s Mosque, Masjid Muhammad.

The area where the Muslim service happened, Campbell said, is now her favorite part of the building.

The ecumenical piece of her ministry at the Cathedral surprised her, Campbell admitted, saying that she hadn’t had the opportunity before to put ecumenical ministries into practice.

“That came as a result of the Mandela funeral” in 2014, she said, “and it just became something really beautiful.”

Campbell said that there were many “little moments” that for her: the way the light hit a stained glass window; when the acolytes finally got their implements straight; moments when the music brought her to tears; and days when the prayers touched her heart. 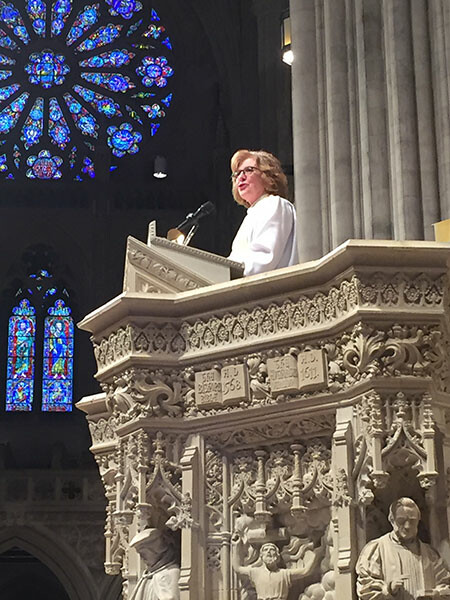 The preacher for the service highlighted the ecumenical nature of God. The Rev. Susan Henry-Crowe, General Secretary of the General Board of Church and Society, based in Washington, D.C., preached from Genesis 12 on the story of Abram, Sarah and Lot and the search for the promised land.

God calls each of us to go to a new place, she said, adding that God will always be watching over us on the journey.

“God doesn’t want any of God’s children sacrificed,” she said, noting the story of Abraham and Isaac in Genesis 22. “All of us should live in peace.”

Henry-Crowe, who became General Secretary in 2014, said that it matters with whom we travel on the journey God has called us to be on.

“With whom will we stand?” she asked. “Will we be with travel companions or fellow pilgrims?”

Echoing John Wesley’s theology of prevenient grace – the grace of God that goes before us – Henry-Crowe said that on our journey, God will already be there before we arrive.

“God’s story is given to us,” she said, “and God will come and lead us into the new world. We will need to cast our sights to our world and our own community.”

Noting that 80 percent of the world’s population lives on less than $10 per day, Henry-Crowe urged religious leaders to focus their attention and relationships on the poor.

As Campbell moves towards a time of teaching students at Wesley, she said she’s excited the future.

“These are the Book of Common Prayer people” at the Cathedral, she said, “so they aren’t used to people writing their own prayers. I have figured out that I’m actually pretty good at it. Writing prayers takes time to learn, so I hope to teach them how to write beautiful prayers; how to let God write them through them.”

Campbell sums up her time at the Cathedral by saying it has been a “big privilege” to be there. “My dad’s a Methodist clergy, and I grew up with him doing circuit churches. When I was in the little circuit churches that he served, as a little girl, I never dreamed I’d be in a place like this.”