How wonderful the Dispensations of Providence! Surely the very hairs of our heads are all numbered. 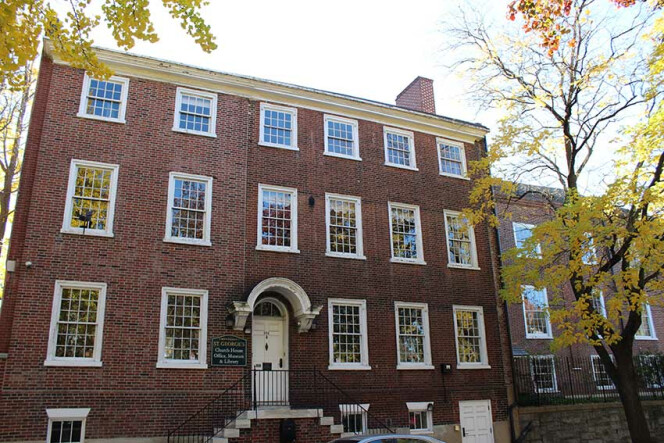 These words, taken from the journal of the Rev. Joseph Pilmore (or Pilmoor), John Wesley’s designated organizer for the Methodist societies in colonial America, celebrated the acquisition of the property we know as Historic St. George’s Church in the heart of old Philadelphia.  His words would prove far more prescient than even Mr. Pilmore could have guessed, for St. George’s would play an important role in the formation of not one but two Wesleyan denominations.  The first Methodist hymnal for use in America was printed here, and the Publishing House got started on its premises.  Rev. Francis Asbury, the chief leader of Methodism in the newly independent United States of America, would serve as pastor of St. George’s and make it his base of operations for a time.  St. George’s would even go on to move the longest suspension bridge in the world.  Yet this, the oldest Methodist church building in continuous use in America, began its life in service to an entirely different Christian denomination.

In 1763, Philadelphia’s Dutch Reformed community, needing a place to hold worship, acquired the property on 4th Street between Sassafras (now Race) and Vine streets.  Though they were able to build the building shell with walls and roof, the congregation – having spent the considerable sum of £2,000 – ran out of money with bills unpaid, and their trustees found themselves in the nearby debtors’ prison.  The building was to be but for years no buyers could be found, and the colonial Assembly ordered that it be put up for auction.  The winning bidder, at £700, was the mentally ill (or perhaps challenged) son of a local gentleman who wanted to get out of the sale; but was unwilling to have his son declared incompetent to do so.  He was looking for a way to get out from under what was to him the useless shell of a church building.

(By the way, what would £2,000 in 1763 pounds sterling be worth in 2017 U.S. dollars?  This is not an easy calculation to make for various reasons.  A straight-line conversion would be about $400,000 today.  But human work was valued differently, and much of the construction costs would have been in labor, to the tune of perhaps $6 million.  It was a lot of money.) 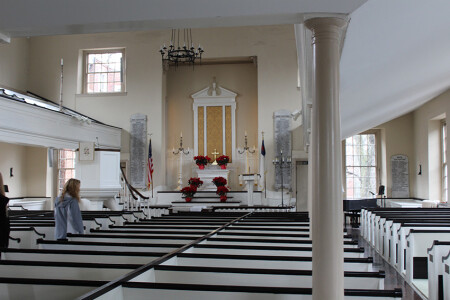 Meanwhile, the Methodists were looking for a home.  Thomas Webb, a former sea captain, had lost an eye in against the French in Canada.  He returned to Britain scarred in body and depressed in spirit, convinced of his utter sinfulness and the hopelessness of his standing before God.  In 1765, he attended a Moravian Sunday service at the urging of a friend, where he was convinced of God’s grace and found the assurance of forgiveness; and soon, he became an avid follower of the branch of Methodists led by Rev. George Whitefield.  By an odd (we would say, Spirit-ordained) set of circumstances, the scheduled preacher failed to show for a service at Bath one day.  Webb shared his personal testimony to great effect and was encouraged to take up preaching.

And preach he did: Captain Webb became a tireless worker for the Methodist cause.  Returning to America via New York City in 1767, he helped to consolidate the Methodist society there, as well as in the Jerseys, and parts of Delaware, Maryland, and Pennsylvania, including Philadelphia.  The society grew rapidly, and Webb himself sold books on the city streets in the effort to raise money for a permanent meeting place.  Captain Webb would return to England in when John Wesley appointed him to use his considerable administrative talents to sort out the troubled societies in Ireland.  The following year he and his wife, Grace, returned to America. Denounced and jailed as a British spy during the Revolutionary War, he was paroled and exchanged on orders of none other than General George Washington.  The Webbs returned to Britain, where the captain continued to be an energetic preacher and organizer for the “connexion” until his death in 1796.  This apostle of Methodism in the mid-Atlantic is buried at the New Room, Bristol, England.

On 24 November 1769, the building having been purchased at a discount for £650, Rev. Pilmore preached the first sermon at the dedicatory service for St. George’s, which still had a dirt floor for the occasion.  The building has been in use by the Methodists ever since, and many other “firsts” have followed: the first Watch Night service in America (1770), Francis Asbury’s first American sermon (1771), the first American Methodist conference (1774), the first presentation by Dr. Thomas Coke of Wesley’s plan for organizing the Methodist Church in America ( 1784 – the Christmas Conference organizing the Methodist Episcopal Church would follow in Baltimore the next month), and the first Methodist bookstore (1789).  In 1785, Richard Allen and Absalom Jones became the first licensed black preachers in the Methodist Episcopal Church, followed by Harry Hoosier.  St. George’s also played a role in the birth of the Sunday School movement, and “The Philadelphia Movement” of lay ministry in the mid-1800's.

The year 1785 brought a tragic chapter in the history of St. George’s. As the preaching ministries of Richard Allen and Absalom Jones were drawing large and growing crowds, especially of African Americans (both enslaved and free), tensions grew in the St. George’s congregation. Various strategies were tried for accommodating the increase: special worship times featuring the two preachers, and the building of a new balcony in the sanctuary.  But when the white leadership mandated a new policy relegating worshipers of color to the balcony only, the unity of the church frayed; and when Absalom Jones, a licensed preacher, was physically accosted during prayer by a trustee for refusing to remove to the balcony, unity broke.

The great majority of the black membership walked out in protest. One result was the formation of a new congregation, (Mother) Bethel Church, whose pastor, Bishop Richard Allen, became after a few years the first leader of a new denomination, the African Methodist Episcopal Church.  Rev. Absalom Jones, who left the Methodists altogether, became the first black Episcopal priest and the pastor of St. Thomas Church in Philadelphia, the first Episcopal Church serving an African American congregation.  (A unity service at St. George’s in 2009 together with the Mother Bethel congregation marked the first such joint worship since 1785.)

Unfortunately, the story of St. George’s has not been one of unalloyed numeric growth and success.  After peaking at over 3,000 congregants in the 1830's, the church’s numbers declined sharply by the early years of the 20th century. In the 1920's, when the Delaware River Port Authority (DRPA) was preparing to build a suspension bridge linking Philadelphia to neighboring Camden, New Jersey, plans called for demolishing of St. George’s and building the new road deck straight through where the sanctuary was situated!  Enter Bishop Thomas Neely, a retired missionary and author, and a zealous champion of the church.  When DRPA would not budge, he took it to court in what was presumed to be a slam-dunk win for the Port Authority.  The judge thought and ordered that DRPA move the already-designed bridge 14 feet from the church’s walls – which was done, and not an inch more.  With a span of 1,750 feet between the towers, the Benjamin Franklin Bridge stood, at its opening in 1926, as the longest suspension bridge in the world.  But St. George’s was the church which moved it!

Today, the church’s attendance is once again quite small, though the congregation is proud of and dedicated to its role in keeping this vital piece of the historic witness of American Methodism alive.  The redevelopment of once-industrial properties into new condominiums in Center City Philadelphia also holds the promise of new vitality in the community and for the church.  The sanctuary is beautiful and kept in pristine condition, and especially lovely when decorated for the Advent-Christmas season.  Ask your guide to show you one of the original offering baskets with the long handle, at the end of which was attached a pin or feather that the ushers could use for rousing drowsy worshipers. 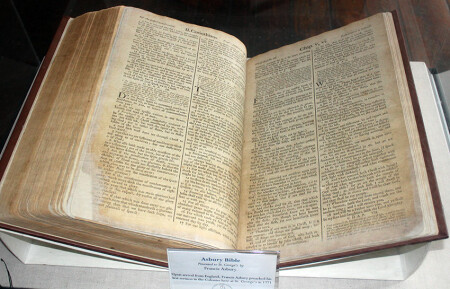 A nice museum graces the entrance level of the and includes portraits of historical Methodist notables such as Francis Asbury, Richard Allen, Harry Hoosier, Absalom Jones, and Thomas Neely.  Among the many other artifacts a Bible given to the church by Asbury, a chalice given by John Wesley, and a pair of spectacles that belonged to William McKendree, the first American-born bishop.

The church and museum are open Wednesday-Friday, 10 a.m. to 4 p.m. and on Saturday by appointment.  Plan to spend about minimum.  Admission is free, though donations are welcomed.  The church offers periodic “Time Traveler” programs with interpreters in period costume.  See their website or call (215) 925-7788 for more information.  Historic St. George’s UMC is located at 235 N 4th Street, Philadelphia, PA 19106.  Parking can be found on the street by the church, or in a city lot on 3rd Street.

While you are in Philadelphia, just a few minutes away from St. George’s stands the National Museum of American Jewish History (101 S Independence Mall E), a Smithsonian affiliate.  (A walk of about ten minutes from St. George’s can take you past the United States Mint, along with Christ Church Burial Ground with its graves of revolutionary luminaries such as Benjamin Franklin.)  The NMAJH offers superb exhibits on the whole span of Jewish life and culture in America, from colonial times to the present, including the tension between assimilation and keeping distinct within the majority culture.  The museum provides a unique perspective on religious liberty and its meaning in our republic.  Allow two hours minimum; see the website for hours and admission prices.  An adjacent building boasts an excellent eatery with both Philly cheesesteak sandwiches and Asian cuisine.  Across the street from the NMAJH is the new headquarters of the American Bible Society (101 N Independence Mall E), which in 2016 announced plans for a new Faith & Liberty Discovery Center which will highlight the link between Philadelphia, America, and the Bible.  It promises to be a great and informative attraction, so stay tuned!

America’s first national capital offers much of interest to our spiritual heritage, in addition to our political and cultural treasures from the past.  A visit to Historic St. George’s is a great way either to kick or to cap off, a visit to the “City of Brotherly Love.”