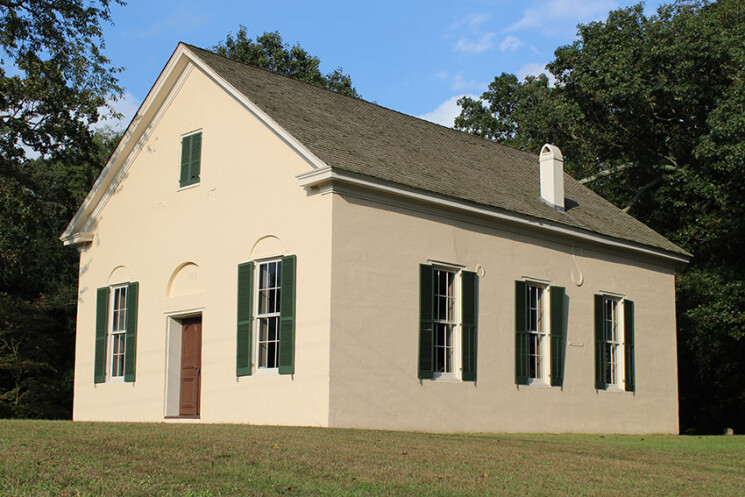 Read about other historic Methodist sites that Charles Harrell has

In Queen Anne County on Maryland’s Eastern Shore stands one of the oldest Methodist chapels in America. It was built in 1783 Red Lyon Branch on a 1.5-acre parcel known as “Sarah’s Portion” that had been donated by Joshua Dudley, a local farmer.  Dudley’s Chapel – earlier known as Queen Anne’s Chapel and the Brick Preaching House – was visited by the most prominent names in Methodism at the time, and continues a sentinel of grace and witness to Methodist heritage more than two hundred years later.

The year 1783 was significant for Methodism and for Maryland. August saw a young man who had only recently purchased his freedom choose the name Richard Allen and receive his papers as a freedman. A fledgling Methodist preacher, the one-day Bishop Allen would rise to become one of Philadelphia’s most prominent and a founder of the African Methodist Episcopal Church. In nearby Delaware the Rev. Francis Asbury, having been in hiding during much of the revolutionary period, prepared to emerge and assume leadership of the Wesleyan movement in America. Annapolis became the temporary capital of the new United States of America for a few month’s time. Thus it was there that the victorious General George Washington, resisting calls to seize political power, appeared before Congress in December to resign as commander-in-chief of the Continental Army before heading home to Mt. Vernon for Christmas.

Meanwhile that year, not many miles east of Annapolis, the Methodists built a new chapel.

There is something irresistibly poetic in the history of Dudley’s, as recorded in the Vestry Minutes of 1794, the first year in which parish records were kept:

In other the chapel was erected in the year the nation won its independence, and it was roofed and glazed in the year that the formal establishment of the Methodist Episcopal Church gave a cover of structure and a sense of vision to the scattered Wesleyan societies in America.

Of course, the actual planting of the church was not so easy as the few lines in the minutes suggest. Benjamin Elliott, one of the early laymen at Queen Anne’s Chapel, personally put up the £278, 9s, 2p required to build and furnish the building; he would be years recouping the investment from a relatively poor rural congregation. (The equivalent value today, factoring in changes in labor value, would be close to $400,000.) 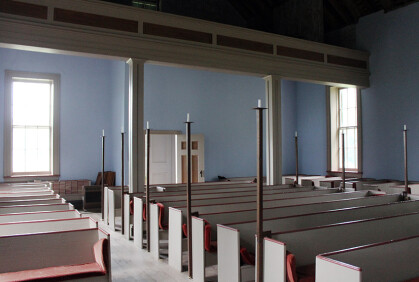 Originally a simple brick structure with a whitewashed interior and high pulpit, the chapel had a single-story 20-by-60-foot vestry added onto the rear of the building around 1809; it was used for meetings and as a schoolhouse until 1869, when it was torn down and the entryway next to the pulpit was replaced by a window. A balcony gallery was added in 1811, with stairway access from the main sanctuary; it was used by black congregants until just after the Civil War.  The gallery was closed in and the stairs were removed during the renovation of when the interior ceiling was also lowered by eight feet and the pulpit was lowered. Though not open to the public today the gallery, with its bleacher-like seating, can still be seen from the pulpit platform.

On the main level, the original bench seating gave way to pews in the 1840's. A stucco finish was applied to the exterior at the time of the chapel’s centennial in 1883, giving Dudley’s the primly elegant external appearance it has today. In the 1990's, steel trusses were installed to add support to the building, by then two centuries old; the cypress-shingle roof was replaced, and core studies of the paint were made to determine the color and composition history of the interior adornment. In the end, the church has been restored to an approximation of its 1883 appearance, including the “Victorian blue” paint in the sanctuary. The effect is simple, yet stately, though sadly some of the interior appointments have had to be removed for safekeeping after a break-in during the 1970's; they are brought out for special occasions only.

Among the prominent Methodist leaders who visited Queen Anne’s Chapel in its early days were Dr. Thomas Coke, Rev. Richard Whatcoat, Rev. Jesse Lee, and Rev. Freeborn Garrettson (the first American-born Methodist preacher). Bishop Francis Asbury is locally remembered as having made annual preaching visits, though his journal is silent on this point. The congregation has also produced a number of clergy over the years.

The years encompassing the Civil War were turbulent ones for Queen Anne’s Chapel, as they were for many churches in the region. In 1853, a group of trustees resigned and moved up the road to found Sudlersville (later Calvary) Methodist Episcopal Church. In 1865, as the Civil War was drawing toward a Union victory, disgruntled white members informed their black brothers and sisters that, come November, they would no longer be able to worship with the congregation or hold class meetings in the vestry building. When an appeal for a delay was denied, black congregants met under the trees outside the chapel, typically in much larger numbers than their struggling white counterparts. Another internal upheaval brought the exodus of another group of trustees in 1868, to form the Asbury Methodist Episcopal Church, South, echoing the division over slavery between the northern and southern branches of Methodism which had occurred before the Civil War. Within a few decades the congregation, which was reported as nearly filling Queen Anne’s Chapel in 1785, had dwindled to such a point that Dudley’s was meeting every other week by 1917, and officially closed in 1919.

Today, Dudley’s Chapel is a “limited service” facility on the Sudlersville UM Charge, linked with Calvary-Asbury in Sudlersville and St. Paul’s in Ingleside. (Jeffers Chapel UM Church, a predominantly black congregation, meets around the corner from Dudley’s Chapel on Sudlersville Road.)  Beginning in 1953, an Easter sunrise service has been held in the building, to which was added a Christmas Eve candlelight service in 1970. In addition to these two services, an annual Homecoming service takes place on the first Sunday in October. All persons are welcome. The chapel also hosts weddings, funerals, baptisms, and other special acts of worship. Groups of school children, reflecting the diversity of Queen Anne County, visit for interpretive history demonstrations. Dudley’s Chapel was listed on the National Register of Historic Places in and was designated a United Methodist Historic Site in 1994. In 2000, it was named a Local Legacy by the Library of Congress.

Getting to Dudley’s Chapel is easy. Coming from the west, after crossing the Chesapeake Bay Bridge stay on north when it forks with US-50. After bypassing Centreville, continue just a few miles to the junction with Maryland route 300, Sudlersville Road; turn right. (You should see a historical site sign indicating the turn.) After just over a mile and a half, turn right onto Benton Corners Road: as you round the first bend, the chapel with its distinctive creamy-peach stucco will appear on a small rise to the left.

Dudley’s Chapel is located at 1110 Benton Corner Road, Sudlersville, Maryland. It is open for visitors on the first Saturday of the month (May - October) from 10:00 a.m. to 2:00 p.m., or by appointment: call (410) 928-3406. Admission is free, with donations gratefully accepted. Mrs. Loretta Walls, the lead volunteer, belongs to a family whose history with Dudley’s goes back and offers a wealth of information about the history, ministry, and restoration of the site.  A historic cemetery adjacent to the church has markers going back to 1841, and even older unmarked burials.

A stop at Dudley’s Chapel will leave you with additional time during the day to visit other places of interest in the area, such as Centreville or Chestertown (each about 20 minutes ), Rock Hall (35 minutes), or St. Michaels (one hour away, home of the Chesapeake Bay Maritime Museum and Hooper Strait Lighthouse). If you’re hungry, Sudlersville is two miles from Dudley’s and offers homestyle food at the Parkside Deli (by the railroad tracks on E Main Street), or Italian cuisine with warm and friendly service at Carletto’s Pizza and Pasta (220 N Church Street). There is also a very small museum at the Sudlersville Train Station (101 S Linden Street), featuring local history and memorabilia from baseball legend Jimmie Foxx, who played for the Philadelphia Athletics (1929-1935) and Boston Red Sox (1936-1942): www.sudlersvillemuseum.org.

Whether you’re doing a weekend on the Shore or just passing through, take the opportunity to stop by this venerable worship site, reflecting as it does the story both of devotion and division, of faithful beginnings, a painful past, and hope for the future of Methodism in Maryland.