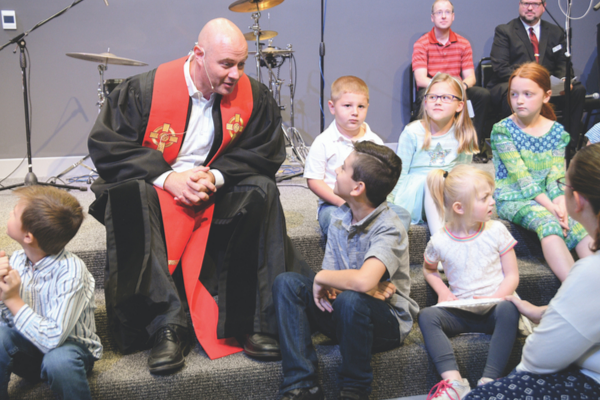 The Rev. Mike Bennett shares some thoughts on how to find fun hiding places in the new Rehoboth UMC during the children’s sermon on Oct. 6. Rehoboth UMC moved into its new $6.5 million building that Sunday. Photo by Melissa Lauber.

We all know that time travel is purely science fiction, but how do you explain Rehoboth UMC in Williamsport travelling 185 years on Oct. 6?

The answer is easy. The church, located in land-locked, car-parking-starved downtown Williamsport since the early 1800’s, uprooted itself and moved three miles to the east, out to the country, to a spacious, 105-acre piece of land featuring ample parking, a pavilion, and a $6.5 million new building.

It is the fruit of dreaming, planning, praying, and sacrificing for more than 20 years.

At the de-consecration service at 9 a.m., tears flowed and hugs were shared as people worshipped in the space, located on Salisbury Street, for the last time. A video montage showed pictures of people from an old directory, eliciting a few laughs and giggles, and more than a few “awwws…” as people recognized friends from the past.

The Rev. Mike Bennett, the church’s senior pastor, offered a sermon that was inspirational, offering hearty congratulations for the church’s big day, but also a reminder not to rest on their laurels.

Preaching to a packed house — including an over-flow room in another part of the building — Bennett said that for those who had worked the hardest on this project, the message from Luke 17:1-9 was clear: you can’t stop now.

“You would have thought,” he said, “that the servant in Jesus’ story would have been told by the master, after working in the fields all day, ‘come on in, take a seat, well done thou good and faithful servant; you have served the master, enter into the joy of my kingdom.’ Some version of that. ‘You’ve worked hard; take a break; take a load off. You’ve earned it.’”

Instead, the servant is instructed by the master to serve dinner and only then is the servant allowed to eat and drink.

“What I hear,” Bennett said, “is the master saying to me, ‘Alright; change clothes, get washed up and get back to work because there’s service to be done.’”

As the worship concluded, various elements from the sanctuary were brought out into a waiting white pick-up truck that would transport them to the new building. The altar cross, candles, Bible, flowers, offering plates and more were taken out.

Craig Koons, superintendent of Sunday School, vigorously pulled the church bell rope as people filed out of the building, walking and standing next to a “For Sale” sign planted in the small front yard. He’s been a member at Rehoboth for 40-plus years.

At the new church, Bennett cut a large red ribbon at the entrance at 10:45 a.m., and worship in the new building began at 11. The differences between the two churches were striking.

At 20,000 square feet, the sanctuary – which will be the Fellowship Hall after the “real” sanctuary is built in the next phase – is several times larger than the old building. More than 400 people sat among long tables, facing a platform with a large digital screen. No overflow was needed. An image of Jesus kneeling in the garden, which was prominently painted on the wall behind the altar at the Salisbury church, greeted worshippers in digital form.

After the service at the new church was finished, Bennett spoke about the importance of the day.

“It’s been a powerful day,” he said. “Over the last few years, it’s been a journey for all of us. I know a lot of people in the church are tired, and I’m tired, but I’m ready to keep going because we have so much work to do.”

Bennett said he originally thought the day would be about simply congratulating the people and that would be that. However, the Holy Spirit had different ideas.

“Probably the biggest caution for our church is now that we’ve made it, we can rest. That leads to death,” he said. “I don’t intend to stop.”

Bill Morrison, a member at Rehoboth for more than 20 years, said the new church was a continuation of offering God’s love to the community.

“It’s an opportunity to bring more people to Christ,” he said. “Rehoboth means ‘room for all,’ and that’s what we attempt to do. We attempt to put enough room where all are welcome.”

The elements brought over from the Salisbury church were re-consecrated by either Bennett or the Rev. John Wunderlich, superintendent of the Cumberland-Hagerstown District. Each was used almost immediately. 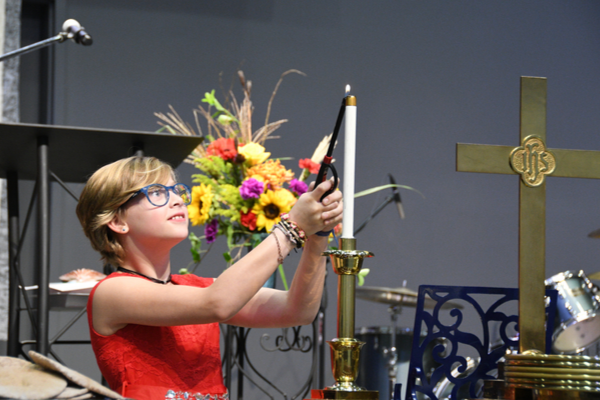 The baptismal font, for example, was used when Bennett baptized Michael Beard and Ariana Cantner, the first two people baptized in the new church.

The Rev. David Highfield, a retired Elder who served Rehoboth 1974 to 1983, stood outside the new church as the memories came flooding back.

“They nurtured my sons with Christian education, warmth and love in my nine years here,” he said. “It was a great experience, in Christ, to be a part of this congregation. Today is very exciting. I could feel the emotion even though I haven’t been up here in quite a while.”

In his sermon at the new church, Bennett outlined what comes next for Rehoboth. Once the debt is paid down to “where we are comfortable,” he said, the next phase will start. An identical wing to the one already built will be added on, with a sanctuary that will seat 1,000 people.

“That was the vision from the beginning,” he said. “That we would hear a thousand voices sing.”

Rehoboth is moving closer, every day.

Wonderful article. Thanks for sending it to us.


Wow! This is exciting and a breath of fresh air. Well done! Congratulations to Rev. Bennett and the dedicated disciples of Rehoboth.