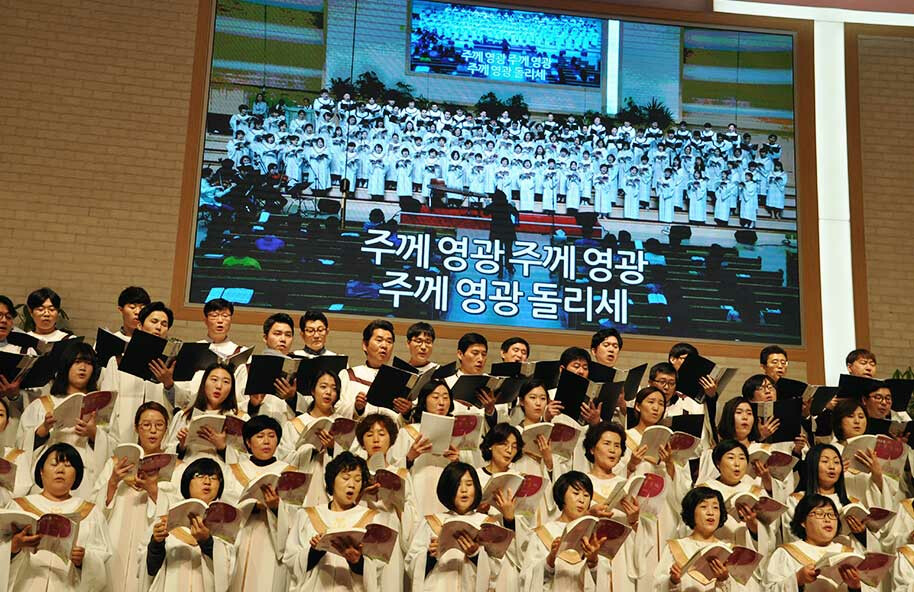 At Daejeon Central Church, where Bishop Seung Chul Ahn is , neither the orchestra musicians, the band members, the choir director, the large choir, the special women’s quintet, nor the hip-hop dance troupe gets paid. Neither do the workers in the church’s coffee or the leaders of the children’s church.

“They serve God,” said Miss Ahn, the bishop’s daughter. “They give of themselves to honor God.”

Sitting in a pew at one of the five Sunday services, it’s easy to believe God is both honored and pleased by their gifts. The holy washes over you, punctuated by the congregation’s shared staccato “Amens” as something Bishop Marcus Matthews says in his sermon touches their hearts.

In some odd ways, this projection summoned up images of the global church for me —and not always in the best ways. Too often, we have one or one ministry, or one program praying and playing with fervor in the foreground. But the way we project it makes it look larger and more abundant than it actually is. (Kind of like with the Great and Powerful Wizard of Oz, it can be troubling to look behind the curtain.)

Being present in the midst of the Baltimore-Washington Conference’s partnership with Korea makes me realize the multitude of possibilities when United Methodists connect in beyond borders. When we think of the BWC’s partnerships in Russia, Zimbabwe, Puerto Rico and Korea, the potential for truly transforming the world with potential.

In the midst of that beautiful music at Central Methodist Church and pride in John Wesley’s inheritance of “the world as our parish,” I was moved at how the Holy Spirit washed away cultural distinctions and worship transcended language. And then, the first hymn began, and projected on that large screen were the words to the song in Korean —and in English.

Bishop Matthews and I were the only two non-Korean speakers in the huge sanctuary. But they made the effort to ensure we could sing, that we felt at home, that we could fully worship with them. It was a gesture, and it was .

I found myself wondering how much other local churches go above and beyond to welcome the strangers in their midst. How much do I offer radical hospitality?

At lunch following worship, I sat with a clergywoman from Toronto, who leads one the Canadian Korean Methodist churches joining the Nambu Conference this week. Her name is Grace. She shared how she believes there is science that proves that what we feel in our heart is projected to others in about a 10-foot range. Our feelings are contagious, in other words.

She calls this “Peter’s shadow,” from the verse in Acts 5:15-16 in which sick people positioned themselves so that the apostle Peter’s shadow might fall on them as he passed by and heal them. How we receive our faith and project it to others in proximity to us matters. 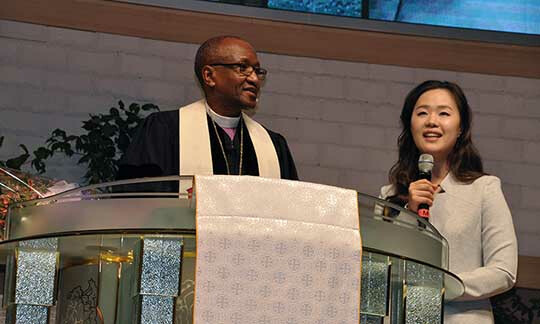 In his sermon, Bishop Matthews shared how we might possess hearts we want to share with the world. Citing the work of missionary E. Stanley Jones, he told those present, “Whenever we focus on Christ first, as the main event in life, everything else will always fall into its own proper place.

“There is nothing greater, or richer or more timely than living and telling the story about the resurrected Christ in our lives,” the bishop said. “In the Book of Acts, Scripture says, ‘You shall be my witnesses in Jerusalem, and in Judea and in Samaria.’ But we know holy scripture is the ‘Living Word’ and so we can translate that today to mean, ‘you shall be my witness to Daejeon, Baltimore Seoul and to the ends of the earth.’”

*Melissa Lauber is Director of Communications for the Baltimore-Washington Conference.