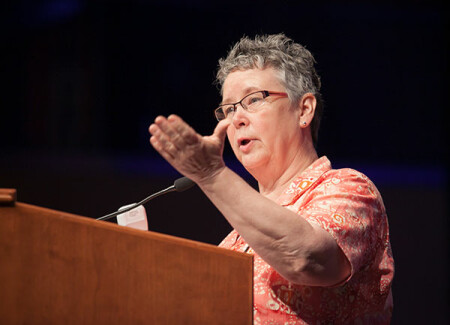 Jen Ihlo, chair of the Rules Committee, presents a resolution on the Circles of Grace process.

How will conference members consider controversial social issues? What measures should a church take if its pastor dies? These were two of and process questions the members of Baltimore-Washington wrestled with during the plenary session June 3.

At the direction of last year’s Annual Conference, during the past year, the Conference Rules Committee drafted a set of policies that would allow conference members to consider some of the issues that come before them in small groups during a time of guided conversation and discernment. This process, used in 2014 and 2015, is called Circles of Grace.

The committee, chaired by Jen Ihlo, brought this codified process, hailed as an innovative method of holy conferencing that moves beyond the winners and losers of floor debate, to the body for inclusion in the conference rules.

However, members expressed concerns about the process, the same concerns that arose last year, which led to the petition being amended by Matt Sichel, a lay member from Wesley UMC in Hampstead.

Sichel’s changes allowed for the Circles of Grace process to occur first and then added opportunities for discussion governed by parliamentary procedure and Robert’s Rules of Order to allow the discussion to be shared by the full body.

The petition prompted more than an hour of debate. Some, fresh from what they viewed as a contentious General Conference, said they watched the church “struggle with procedure in its weaponized form,” and urged the conference members not to allow fear to take them away from this “exceptional new path for addressing difficult issues in new ways.”

Others cautioned that parliamentary procedure was necessary “to protect the views of the minority.” They also asserted that Circles of Grace limited conversation to the 10 or 12 people in the group and , if done with courtesy and respect, could be a valuable tool for holy conferencing.

Because it was a change to the rules, the petition required a two-thirds vote to pass. The results of the vote were: 437 yes; 260 no; and so the petition failed, receiving only 62.7 percent support.

Members also debated guidelines brought forward by the Revs. Sarah Schlieckert and Deborah Scott that outlined a conference policy to be used upon the death of a clergyperson who dies while serving as pastor of a local church.

Schlieckert shared how her clergy father, grandfather and brother all died during a relatively short period of time.  This petition was intended to clarify policies and assist church leaders, family and conference staff.

After a substantial debate, the complexity of some of the issues, especially around confidentiality and electronic communications, led the members to refer the petition to the conference chancellor for review.

In other action, members voted:

Some of the members also expressed a sense of frustration and urgency about the scheduling of petitions to the Annual Conference Session. A motion from the floor passed that recommends the Sessions Committee place any resolutions on the agenda the day before the end of the Annual Conference or earlier.

The Rev. Deborah Scott also raised a motion, which passed, that all the Conference , rules and guidelines be gathered in one document, which will be posted on the Conference website.

Following a Stewardship report on June 2, the Rev. Melissa Rudolph brought a motion to the floor to support clergy couples addressing the rising costs of health care.

Her motion called for the creation of a policy that ensures a specific policy is created, and that annually called meetings are held for clergy couples with families.

Since 2014, clergy couples with children have been able to consolidate their coverage under a single Healthflex account. However, not everyone took advantage of this option.

Rudolph, her husband, the Rev. John Rudolph, and the Revs. Katie and Chris Bishop spoke passionately about the financial implications and difficulties facing families in which the parents were both . They were strongly supported by the body.

However, because existing measures could be used to help alleviate some of their financial , the Rev. Deb Scott made a substitute motion, that was perfected by the body.

The final motion, which passed 653 to 9, read: “The Baltimore-Washington Conference Council on Finance and Administration and health representatives will host a meeting before Sept. 1, 2016, and annually thereafter, to address clergy couples’ concerns surrounding health care and make sure all are properly enrolled in one health care plan. It shall remain the policy of the Annual Conference for clergy couples to have the option to remain in one policy.”

The conference will also ensure its database is able to identify and track clergy couples. Currently, reports indicate the BWC has five clergy couples with children.