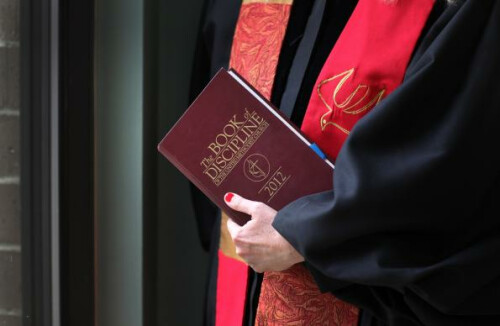 The New York Conference’s board of ordained ministry announced March 1 that it would not consider sexual orientation in evaluating a clergy candidate, even if that individual has a spouse of the same gender.

The board “has observed vital, effective ministry from clergy married to a spouse of the same sex,” said a statement by the Rev. William B. Pfohl, the board’s chair and lead pastor of Jesse Lee Memorial United Methodist Church in Ridgefield, Connecticut.

The statement continues: “Quite simply, discriminating against married persons regardless of the gender of their spouse or against those who hope to be married is not the path we believe God is calling us to walk.”

The move puts the conference on a potential collision course with the denomination’s official teachings on human sexuality. It also comes just weeks after the Baltimore-Washington Conference’s board of ordained ministry announced it was recommending a married lesbian, Tara “T.C.” Morrow, as a provisional deacon.

The Baltimore-Washington Conference board’s recommendation of Morrow still needs the approval of the annual conference’s clergy session, which votes on all clergy candidates. But Pfohl said his understanding is that the board does not need his annual conference’s ratification to set standards for clergy effectiveness.

“We’re amenable to the annual conference, but we’ve been elected to carry out that charge (of setting standards),” he told United Methodist News Service. “This is the functional way the board is working, and we’re being transparent.”

Thirty members of the New York board approved the standards on Feb. 20 by a secret-ballot vote of more than 75 percent, Pfohl said. The standards also affirm celibacy in singleness and fidelity in marriage between two people.

Bishop Jane Allen Middleton, who is New York’s interim leader, said she is aware of the board’s decision.

“As president of the New York Annual Conference, I preside over persons who will agree and others who will disagree with this decision,” she said in a statement. “These are difficult times in the life of our denomination, and my intent is to provide fairness and respect for all. I call for all of us to strive to be faithful disciples of Jesus Christ wherever we stand on this issue.”

Both the actions in New York and Baltimore-Washington come as the denomination prepares for the 2016 General Conference on May 10-20 in Portland, Oregon. Many United Methodist leaders expect the most passionate debates at the denomination’s top legislative assembly to deal with how the denomination ministers with lesbian, gay, bisexual and transgender people.

The church’s teachings on human sexuality are routinely debated at General Conference, as it considers the Book of Discipline. But that debate has intensified as more jurisdictions, including the United States, have legalized same-sex civil marriage. Some United Methodists are calling for schism.

In the meantime, boards of ordained ministry are dealing with the ban in a variety of ways, with some essentially practicing a version of “don’t ask, don’t tell.”

For instance, the Rev. Dan Hurlbert, chair of the Desert Southwest Conference board of ordained ministry, said that his board has no official position. However, during his tenure, sexual orientation has not been a determining factor in anyone’s candidacy, ordination or ongoing ministry.

Hurlbert said some might describe this as “don’t ask, don’t tell,” which he said he personally sees as lacking dignity and far from ideal. And, he added, he wonders “how The United Methodist Church came to be behind the U.S. military on a social justice issue. A closet with an open door is still a closet. I pray for that day when all who are called can serve openly and as who God made them be.”

Instead, he said the board’s move is a response to the New York Annual Conference’s 2014 resolution “Our Vision of a Beloved and Just Community,” which declared the conference “to be the place where LGBTQIQ persons can find safe space.” The initials stand for lesbian, gay, bisexual, queer, intersex and questioning.

“We take seriously our responsibility to try and identify and support and prepare clergy who will be fruitful in our ministry settings. We want the best possible people the Lord has raised up,” Pfohl said. “We understand that there are parts of the Discipline that give some descriptions of what they expect that to look like.”

But he added that the board determined that the Discipline’s restrictions on gay clergy are not where it should focus its attention.

Not every board member sees the policy as a right for the conference. The Rev. Roy Jacobsen, a retired pastor and current New York Conference board of ordained ministry member, was not able to attend the vote. But if he had, he said he would have voted against it.

Jacobsen is a leader in the Wesley Fellowship, an unofficial New York Conference advocacy group that he says is still working on a response.

The Rev. Thomas Lambrecht, vice president general manager of Good News, said that he does not think his group has any recourse against the board itself, but said a newly ordained or licensed gay clergy member could face a complaint.

His denomination-wide advocacy group seeks to keep the current language in the Discipline regarding homosexuality and strengthen penalties against those who defy those teachings.

He sees the Baltimore-Washington board’s action as a “shirking of responsibility,” but sees the New York Conference as in some ways even more extreme.

“The New York action ups the ante in terms of a very blatant and open statement to violate the Discipline,” he said. “The church cannot continue to exist as a denomination with conferences openly or even covertly violating our covenant.”

What this means going forward

others praised the board’s move.

The majority of voters in the New York Conference have repeatedly approved petitions to General Conference seeking to change church law on homosexuality.

The Northeastern Jurisdiction, of which the New York and Baltimore-Washington conferences are members, has submitted a petition “that enables ministry with LGBTQ while allowing each clergyperson, church, and annual conference freedom to abide by decisions of conscience.”

“The New York Conference for decades has been , vocally and passionately opposed to the UMC’s discrimination and hate language against LGBTQI people, and this is a continuation of that,” said Dorothee Benz, a General Conference delegate and national representative of MIND (Methodists in New Direction), an unofficial New York Conference group that sponsored the 2014 conference resolution and advocated for the board’s new standards.

The conference already has had openly gay individuals among its clergy. The Rev. Sara Thompson Tweedy, who married her wife in 2008, faced a complaint in 2013 accusing her of being a “self-avowed practicing” lesbian. The complaint was subsequently dismissed the following year without a trial or any penalty.

Tweedy said in her autobiographical statement during her clergy candidacy, she noted she told the board she was in a partnership with the woman who is now her wife. “No one chose to ask me any questions about that,” she recalled.

She said the board’s move will help people minister more authentically.  “It’s a beautiful day in the New York Conference,” she said.

“What’s so important about the public statement is it says we’re moving away from ‘don’t ask, don’t tell,’” Benz said, “and we’re moving into open affirmation as whole people, and we’re no longer going to make heterosexuality a criterion for ministry.”

What the church teaches

The Book of Discipline, the denomination’s book of policy and teachings, since 1972 has proclaimed that all individuals are of sacred worth but the practice of homosexuality “is incompatible with Christian teaching.”

Church law lists being a “self-avowed practicing” gay clergy member and officiating at same-sex unions among the denomination’s chargeable offenses.

The Book of Discipline states that marriage is between a man and a woman. It also affirms all are in need of the church’s ministry and that God’s grace is available to all. The church implores congregations and families not to reject gay and lesbian members and friends.

» Read full coverage of sexuality and the church on UMC.org.

Hahn is a multimedia news reporter for United Methodist News Service. Christina Dillabough of the Desert Southwest Conference and Kathy Gilbert, a UMNS reporter, contributed to this story. Contact them at (615) 742-5470 or