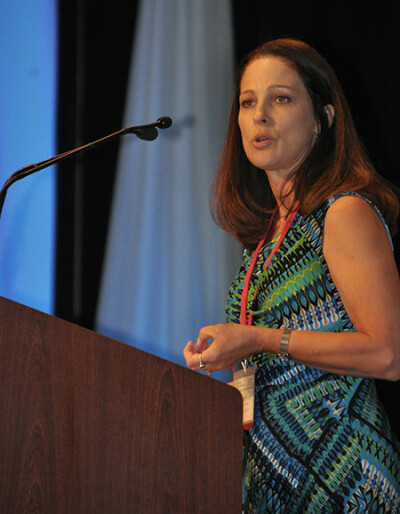 The Northeastern Jurisdiction of The United Methodist Church approved a restructuring resolution recommending the bishops’ study commission on sexuality include a plan to allow regional bodies, such as jurisdictions, to decide for themselves to adapt the Book of Discipline within their own ministry context.

Delegates also approved two other resolutions to show disagreement with church law on sexuality issues. One of those, a petition for “non-conformity” to denominational church law, was later ruled out of order by the presiding bishop.

The third resolution, a proposal to have annual conference Councils on Finance and Administration agree that there is “no money” for church trials, was eventually ruled in order after it was amended and the title deleted.

The restructuring resolution, brought by the Rev. Ginger Gaines-Cirelli, from the Baltimore-Washington Conference, called for a recommendation to the bishops’ “Way Forward” commission that is expected to review all church law related to sexuality.

Creed Pogue of Greater New Jersey argued that moving in this direction would create a more independent, non-connectional church. He urged delegates to vote no. The Rev. Charles Parker, Baltimore-Washington, disagreed. “I would respectfully suggest that the point of this resolution is to create a space for people who are in different theological places and ministry contexts to be at the same table together,” he said. “What this resolution does is to lift up a model. The purpose is to create a wider table… and model it for the denomination.”

After further debate, an amendment to add the words, “and with power to make based adaptation of the Book of Discipline to ensure full inclusiveness” was passed. The full motion passed 109 to 56.

The resolution calling for the Northeastern Jurisdiction College of Bishops to stop church trials was deemed out of order before began by Bishop Thomas Bickerton, who was chairing the session. But he said he would allow the debate to continue to consider possible amendments that could make it in order.

Bickerton explained that the College had reviewed the resolution and that it needed to be more “aspirational” in nature. As printed, he said, it called for bishops to violate the Book of Discipline.

The Rev. L. Fitzgerald “Gere” Reist II, Susquehanna Conference, offered an amendment, which was adopted 96-64. The final paragraph requested that Councils on Finance and Administration of the jurisdiction’s annual conferences “state that there are no funds available for initiating and processing of complaints and initiating of investigations and trials based upon the sexual orientation or marital status of faithful United Methodists or involving clergy for conducting same-sex weddings.”

Opposition to the amendment centered around the interpretation that this amendment was asking those councils to lie.

After the final vote to approve the “Stop the Trials” resolution, Bickerton declared the motion out of order.

“I can’t remember having a conversation at Jurisdictional Conference on this level,” he said. “The College felt it important not to squelch this conversation. We recognize that there is pain around the issue. We acknowledge that in this room there are a variety of opinions. All of our hearts ache as we struggle. Regrettably, I must call this petition out of order, and we’ll move on.”

But after a discussion on the non-conformity resolution, the “Stop the Trials” petition was re-visited. Bickerton said the College of Bishops was aware that the United Methodist Judicial Council reviews petitions in their entirety. “We have looked at the ‘Stop the Trials’ resolution as it was amended,” he said. “Our finding is that the title is not compatible with the content of the and that if a motion is made to amend the title, the petition is properly in order.”

A motion to “strike the title” was made and approved, 111-53, allowing the final version of the resolution to be adopted.

However, Jeffrey Raffauf of Eastern Pennsylvania made a motion for a decision of law regarding the “untitled” resolution, asking whether the approved resolution was in order regarding paragraphs 20, 523, and 525 of the Book of Discipline and the Judicial Council Decision 96 and 886.”

Bishop Mark Webb, who was presiding at that time, said he will issue a ruling within 30 days.

Bishop Peggy Johnson, supported by Bishop John Schol, initially ruled the petition on “non-conformity” out of order because it was calling for the jurisdiction’s annual conferences to not conform or comply with provisions of the Discipline that discriminate against lesbian, gay, bisexual, transgender, queer, intersex, and asexual persons. It also asked that the jurisdiction not participate in or conduct judicial procedures related to those prohibitions.

When Johnson ruled the resolution out of order after it passed, as amended, 91-74, some delegates invited the bishops to consider being out of order with them.

Vicky Flippin, New York Conference, was one of those delegates. After thanking the college for allowing the jurisdiction to have a time of sacred conversation, she urged the bishops to take a bold stance and join in non-conformity.

Johnson replied that the College of Bishops would, in fact, receive the invitation and have a conversation. She said that they would get back to the full body before the end of the conference.

When Bishops Johnson and Schol returned to the stage following the dinner break, the College had not accepted the conference’s invitation. “We know that we are all not of one mind,” said Johnson. “We honor the work of the body, where 60 percent were in favor of this,” said Schol. “And, we also honor the 40 percent who disagreed.”

Dorothee Benz, New York Conference, then issued an appeal of the chair, seeking to have the resolution declared “in order.”

To help understand the parliamentary situation the jurisdiction found itself in, Schol spoke off-the-cuff from the podium. “We are all struggling,” he said. “We recognize that there are annual conferences and individuals who have very different views of the Book of Discipline.” Noting that the vote to maintain the current disciplinary language at General Conference is about the reverse of what it is in the Northeastern Jurisdiction, Schol said that the bishops are charged with looking at this issue from both places.

The vote to uphold the decision of the chair was affirmed by a vote of 94 to 73, which meant the non-conformity resolution remained out of order.