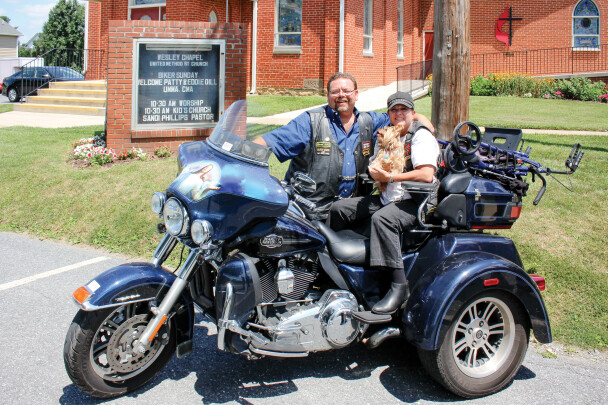 The National UMMA, which lists 148 members in 18 states, was founded in 2012 by Eddie and Patty Gill, who delivered a message during the morning worship before the ride. As experienced Lay Speakers, they enjoy sharing their story of what God has done in their lives.

Patty has Multiple Sclerosis and doesn’t get out much. Eddie, trying to find a way to get Patty out of the house, heard that horseback riding was good therapy for MS patients. However, after a scary weekend of horseback riding, Eddie was afraid Patty’s poor sense of balance would cause her to fall and break her neck.

While driving home from the weekend on horseback, Eddie said to Patty, “Let’s get a Hog.” To which Patty replied, “You ain’t gettin’ me on no pig!”

The motorcycle was easier to get Patty on and she felt more secure. Eddie strapped Patty’s walker on the back of their Ultra Classic and off they went.

Eddie planned a trip through Estes Park, Colo. On the second day over the Rocky Mountain Park, Eddie heard, “Put Me on the front of your bike, get a , organize the Methodists and go a million miles for Me.”

“You can’t make that up,” was a phrase repeated several times throughout their testimony.

Eddie placed an image of Jesus on the front of their bike, and they set out to ride a million miles for Christ. To date, the UMMA has ridden about 400,000 miles.

“We really want to be the circuit riders,” Eddie said. In fact, the day before the Steeple Chase, the Gills joined in a ride to Strawbridge Shrine.

The UMMA of Maryland was founded in 2016 and currently has about 10 members between the Frederick and Central Maryland Districts across five churches. It’s growing every month.

The Thursday before the ride, Rod and Eddie met a man named Duane Johnson at a gas station who was curious about what two guys with motorcycles and a big painting of Jesus were up to. Johnson ended up attending the worship service on Sunday and joined the Steeple Chase ride on his own motorcycle.

“That’s what it’s all about,” said Rod. “Meeting and ministering to people right where they are in life, even at a gas station.”

This being their first Steeple Chase, they carefully selected their stops:

An intentional mobile church that has met in public schools, at community parks and recreation centers and at the Urbana Fire Station fields.

Along with Trinity UMC and FaithPoint UMC, Wesley Chapel sponsored the beginning of the Maryland Chapter of UMMA.

Ice cream ministers to the yummy part of bike clubs.

This church is located near a motorcycle club. Pastor, the Rev. Katie Bishop, is the official pastor for this organization, praying at opening activities and supporting them through prayer.

A UMC youth camp in the summer and a retreat center the remainder of the year on the banks of the beautiful Potomac River.

Located near the Antietam Battlefield, it played a large role in the Civil War.

The ride concluded at this historic and beautiful stone church. It remains as it was in early America — no electricity and no heat. It also has no permanent pastor. Area pastors take turns leading Sunday worship every week at 7 p.m.

The rides are to introduce themselves to the community and find opportunities to serve. They have served meals to the homeless and have delivered items and wrapped Christmas gifts to area food banks and churches, using their motorcycles for transportation.