This summer, the Rev. Rod Miller, a retired Elder in the BWC, taught at the United Methodist Seminary in Moscow. There, he encountered students who are starting small covenant groups in predominantly Islamic communities, launching a coffee house in a church, building a school for the Roma people in their town, starting a drama ministry with special needs children, ministering with people who have been part of the Russian mafia, and pastoring churches where the government is hostile to them.

“The church in Russia is more clearly a movement than an established church,” Miller said.  “Their worship is passionate, and their individual prayer life is strong. They don’t appear to be deterred by the troubles that inevitably arise. They simply keep going and find ways to continue to be in ministry. They are inspiring bunch of folks.” Miller’s trip was part of “In Mission Together Eurasia,” an active mission partnership of the Baltimore-Washington Conference since 2007. But why is BWC’s covenant partnership there important?

The sheer size of Russia and its population provides part of the answer, as well as its location at several of the political, cultural, and religious fault lines on our planet. Methodism, focused on the grace and work of Jesus Christ joined with a call to practical divinity and social ministry, offers a spiritual alternative to Russia’s still-influential atheistic ideology of the past. And among Christian traditions in Russia, Methodism’s encouragement of a personal faith that is open to questions and vital involvement by laity as well as clergy makes it occupy a unique and important place on the spiritual landscape.

In August, an opportunity both festive and strategic came with the biennial In Mission Together Consultation, attended by four persons from our conference. Held for the first time in western Ukraine, Consultation XX brought together United Methodists from Russia, Ukraine, Central Asia, parts of Europe and the United States to discuss how the church in that part of the world is working and planning ahead to fulfill the Gospel mandate and United Methodist mission to “make disciples of Jesus Christ for the transformation of the world.”

Held at a castle-themed hotel just a short distance from the borders with Slovakia and Hungary in a setting usually given over to training rising soccer stars and future Olympians, the three-day consultation was followed by a two-day festival celebrating 130 years of Methodist work in Russia since the founding of the first officially-sanctioned mission in St. Petersburg 1889.

Eurasian United Methodists have identified five priorities for the next five years: 1) Methodist identity; 2) Forming brave and humble leaders; 3) Mission and being a missionary movement; 4) Strengthening the financial base; and 5) Building external relations with other expressions of the Church. All of these are challenging, and we learned quickly that the language doesn’t necessarily mean the same thing to Eurasians as it might to Americans.

For instance, “Methodist identity” might suggest to someone in the States either our institutional connectionalism or something having to do with Wesley’s shades of grace (prevenient, etc.). But there, it means helping people to live in ways which are faithfully Christian and distinctively Methodist, such as building strong families, covenant discipleship, or publication of a life-application study Bible that is Wesleyan in its outlook. 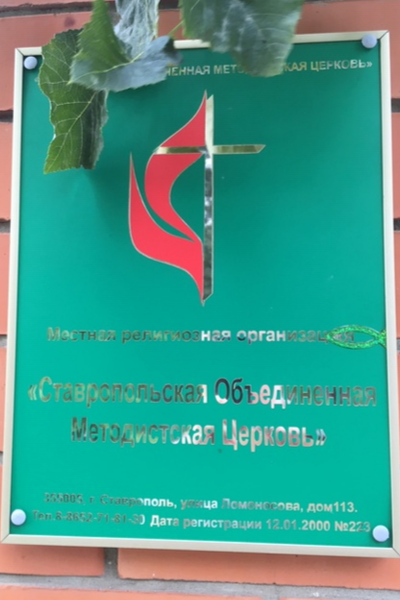 There are other – and exciting – ways in which this same idea is starting to play out. Take, for example, “Muzlab,” a program of the Russian UMC to encourage their own development of Christian music. In earlier years visiting Russia, we would be singing the same hymns and praise songs as in America – translated, of course – and very rarely with a hymn set to a Slavic instead of a Western tune or chant. Increasingly, not only are the original words in Russian or Ukrainian, but the music is written there, too: beautiful compositions that one day we will be rendering into English or Spanish or Korean for use in our worship, reflecting in a new way the global richness of our church.

The Eurasians’ gradual pivot from seeing themselves as a receiving body to a missionally sending one is also exciting, starting with the important work being done among the Roma people and international students from Africa and Asia who are getting their education in Russia, Ukraine, and “the Stans.”

One of the highlights of the consultation for many of us was a presentation on the socio-cultural situation in Eurasia by Taras Dyatlik of the United World Mission. At once deeply philosophical, faithfully scriptural and practical, three pressing challenges were highlighted for the present time: secularism (including individualism and privatization of spiritual experience); the problems associated with migration (as much as issue there as in the U.S.A., though differently nuanced); and the decline of the mainstreams in Protestantism.

He challenged the group to keep the focus on Christ and on missionally proclaiming the Kingdom of God rather than national concerns or trying to rescue Christian civilization. His call to incarnating the work of God in increasingly unfriendly contexts struck a deep chord.

The festival portion was a rich look back at over a century of Methodist work, mainly in Russia and the U.S.S.R., both since the re-establishment of Methodism in Russia in the mid-1990s, and going back to the early days between the 1880s and the 1930s, often against seemingly insuperable obstacles. For instance, Dr. Sergei Nikolaev, dean of the Methodist Theological Seminary in Moscow, shared the story of Julius Hecker, a Methodist who emigrated from Russia to America, and then returned during the 1920s to work among the victims of a terrible famine in the Volga River basin. His great labors, at first successful and praised by Soviet officials, ultimately brought about his arrest and martyrdom in 1938. Many stories, both joyful and tragic, historic and personal, were shared. This, and the cultural and musical exchanges, deepened our appreciation and our sense of connection.

At several points, including during the closing panel discussion at the consultation, our Russian brothers and sisters were emphatic in their appreciation for the partnership of the Baltimore-Washington Conference with them. The steady exchanges and building of our connection, as well as our participation in their work by various means year after year, has forged a strong and precious bond between us in Christ.

If you would like to learn more or become involved in our Eurasia connection, there are different opportunities available. On Nov. 8 and 9, a Bridge-building Conference will be held in Ellicott City and Baltimore to deepen understanding and share more fully about ministry in Eurasia.

You can also look into becoming part of a team going to Russia in the coming year; watch for information and updates.

Or you can drop in on one of our monthly planning sessions to get more of a feel for what we’re about in our shared ministry. Either of us would be delighted to help connect you. We welcome your participation!

One of the most powerful stories shared at the consultation was that of Alla, a woman who had grown up in a town in western Ukraine, very close to where we were meeting. She was part of a Methodist church there that had been planted as a mission of the Czechoslovak Conference. Later, when the region was absorbed into the Ukrainian SSR, part of the Soviet Union, pressure had been put on the church to close and its property was seized. Under such pressure the church dwindled in size to as few as four persons – though the pastor, while he had to secure secular work to support himself, refused to give up. Today, that church continues, one of a handful that survived the Soviet period as Methodist churches.

And Alla? She is now Pastor Alla, a graduate of the seminary in Moscow and leader of a thriving United Methodist church.

Our Eurasian partnership is part of a much larger work of God in the world through the Baltimore-Washington Conference. And Eurasian United Methodism itself is not large, but it is strong. And stories such as Miller’s and Pastor Alla’s bear continuing witness to the truth of the Gospel and of Wesley’s final words on earth: “The best of all is, God is with us.”

*Rev. Charles Harrell is a retired Elder in the Baltimore-Washington Conference.

Wonderful to read this, Charles. I remember the many missions Ken Jones conducted with you.
I also remember attending the World Methodist Conference in 2001 in Brighton England. In a workshop, a clergy woman DS from Russia, an adult convert, said her DISTRICT covered seven time zones!