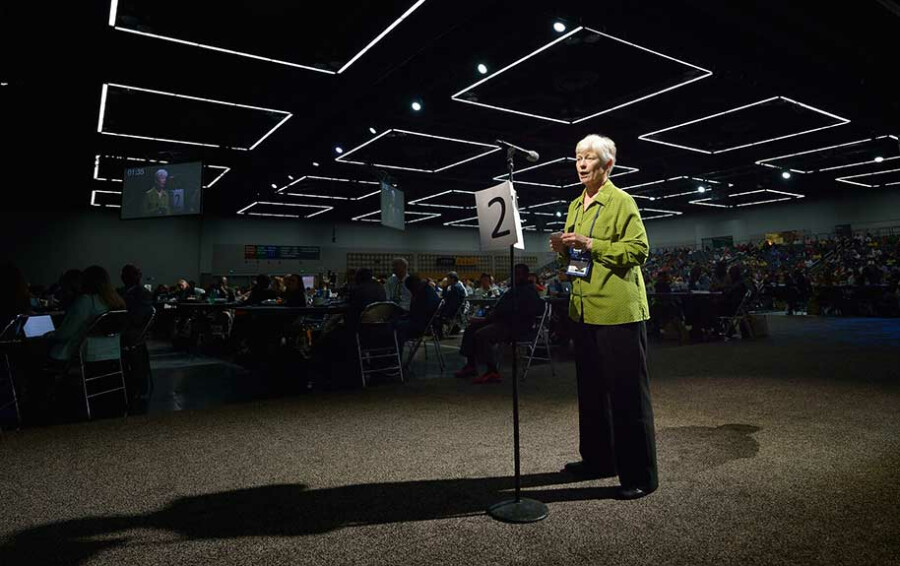 The Rev. Terri Rae Chattin, a clergy delegate from the Baltimore-Washington annual conference, speaks to the United Methodist General Conference in Portland, Ore., on May 12. Chattin spoke in favor of Rule 44, which would have introduced small group discussions for sensitive issues. The proposed rule was not approved. Photo by Paul Jeffrey, UMNS.

After a roller coaster of “will-they-or-n’t-they” episodes usually reserved for love interests in a romantic comedy, delegates finally decided their relationship with Rule 44: They won’t.

Over the past three days, the United Methodist General Conference also has offered a live demonstration of just how difficult following its rules of order can be.

The final tally on the much-debated Rule 44 — a proposed Group Discernment Process — was 355 yes and 477 no. However, even getting to a simple up-or-down vote took the delegates most of their morning.

The Commission on General Conference recommended Rule 44 at the request of the 2012 General Conference, which sought an alternative process to Robert’s Rules of Order for dealing with particularly complicated and contentious legislation. The aim was to use small groups to give all delegates a chance to weigh in on selected petitions. 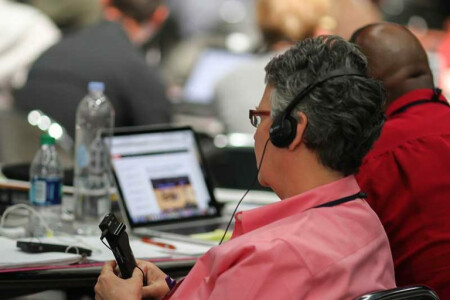 During the May 12 morning worship service, Bishop Christian Alsted challenged those attending General Conference 2016 to offer themselves humbly and in full to Jesus’ authority, as did a Roman centurion described in Matthew 8:5-13.

Alsted, of the Nordic and Baltic Episcopal Area, said he joins other United Methodists in wanting growth and renewed vitality for the denomination.

“In the midst of all my purposefulness and busyness, I may just overlook what became painfully obvious to a pagan centurion,” said Alsted. “The starting point of all transformation is to humbly and wholeheartedly submit to the wounded healer Jesus Christ, and to unconditionally depend on him for the healing of the church.”

Five hundred openly LGBTQ clergy, future pastors and faith leaders in a number of different denominations published a letter offering “much love and light” to the 111 United Methodist clergy and candidates who came out as gay on May 9.

Bishop Kenneth Carter was set to undergo surgery for a severed tendon on the afternoon of May 12 at Portland’s Legacy Emanuel Medical Center. The Florida Conference episcopal leader fell in the plenary hall of General Conference May 10, injuring his left knee badly enough that he required a wheelchair. He was still in acute pain after a cold pack was administered; further evaluation revealed that the injury was severe enough to require surgery.