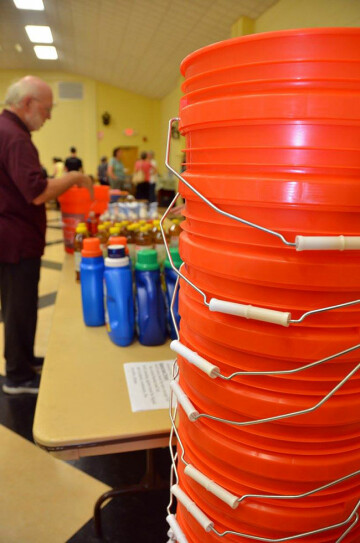 Churches throughout the Baltimore-Washington Conference are responding to the flooding in Texas after Hurricane Harvey in significant and tangible ways. At Emmanuel UMC in Laurel on Sept. 3, for example, members took time between morning worship services to put together flood buckets.

Taking over a chunk of the Fellowship Hall, workers placed items in each bright orange bucket that had been carefully counted and laid out by of the church. In less than 10 minutes, they were done.

“When the call went out on UMCOR (United Methodist Committee on Relief) looking to replenish flood buckets, we like to turn on a dime here at Emmanuel,” she said. “We put the word out through SignUpGenius, and people brought everything in.”

SignUpGenius, Vader said, is a free online app that emails people with requests and reminders. People respond to the emails so organizers know how much of what is requested is coming. It worked so well, she said, that the church will do more flood buckets in the weeks to come.

The church, Vader said, likes to do hands-on ministry and do it quickly.

“We like to respond fast,” she said, “when people’s minds are still focused on Harvey and they’re ready to be generous.”

Celeste Martin was placing items in a bucket that was being held by her grandmother, Delila Moravitz. They, too, just wanted to help, and it was Martin’s first time doing anything like this. 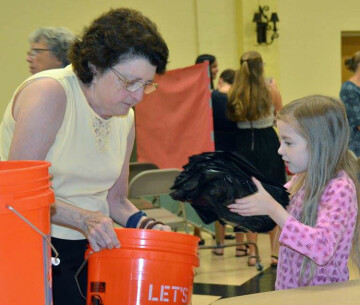 “I wanted Celeste to help out,” Moravitz said, to have the experience of helping others.

Martin has seen some of the images of the flooding on TV. Her response to all that: “It’s like, wow.”

Pat Staffeldt, a member of the church, was one of those who helped. She also helped after Hurricane Katrina when she was part of a team Emmanuel sent to New Orleans in 2007.

“It was very moving to see the destruction, even two years after the hurricane,” Staffeldt said. “There was still so much to be done.”

Donna Meoli, the Director of Spiritual Formation and Youth Ministry at Emmanuel, was supervising the assembly. At the church’s most recent staff meeting, she said, they decided to put together flood buckets. On Thursday, Aug. 31, the word went out.

“We are very fortunate at Emmanuel and in Howard County,” Meoli said. “This is one way to make sure that we are helping people who are less fortunate than us.”

Meoli said building flood buckets isn’t hard. UMCOR makes it easy, she said, by providing the list of needed items on their website, along with an instructional video.

“The hard part is counting,” she said, “figuring out the stacks of 24 bags and seven sponges. That’s why I had the kids do it.”

“Everyone should try and make some (flood buckets),” Meoli said. “Because if they’re not used for Hurricane Harvey, they’ll be used somewhere else that needs help.”