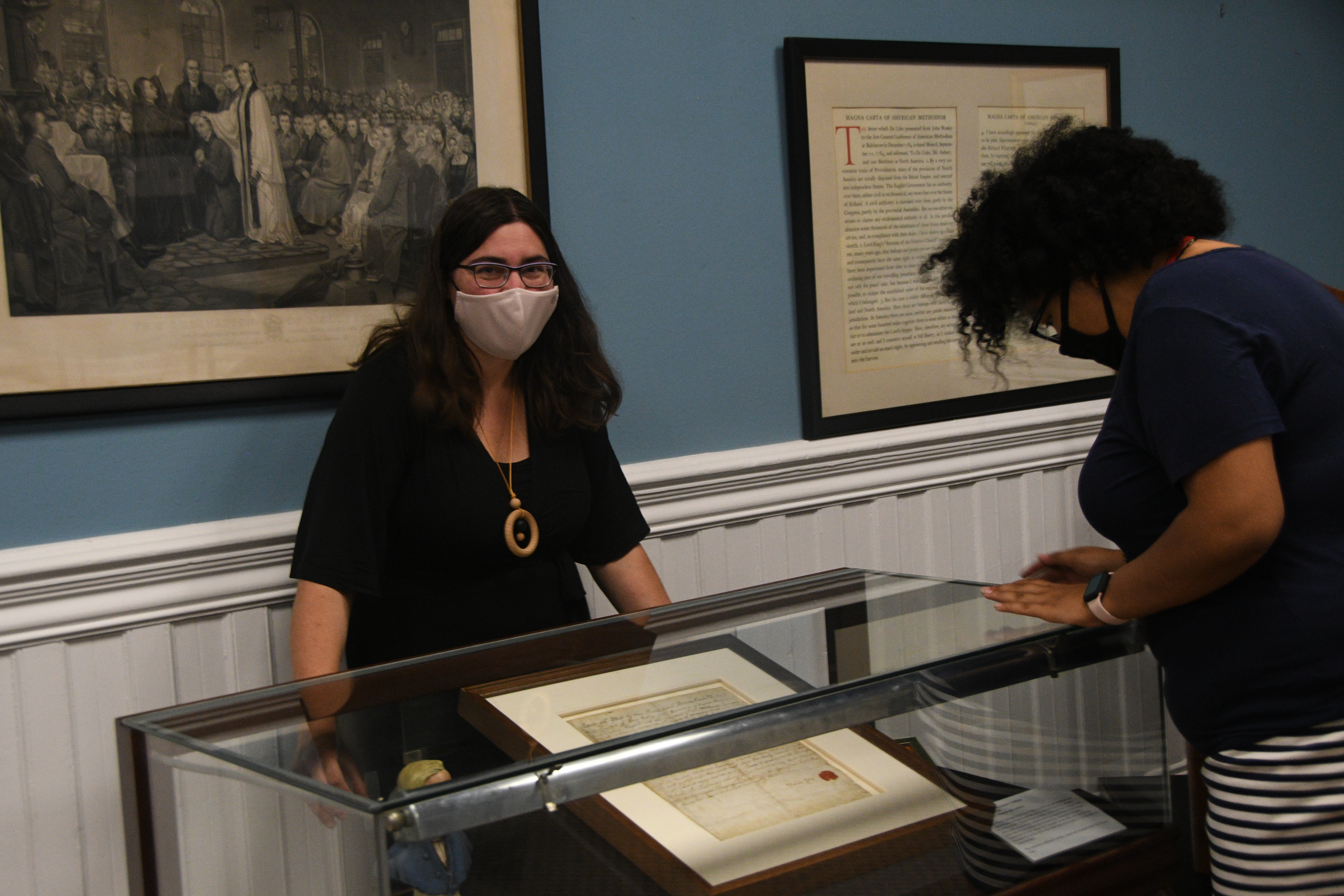 Over the years it’s been a treasure trove, a depository of important and scattered records that span centuries, an architectural gem, a jumble of memories, a vault of irreplaceable artifacts, a museum that attracts a lot of Korean visitors and confirmation classes, and a library for discovering forgotten church secrets and lore.

But during the past year, Lovely Lane Museum in Baltimore has been renovated, reorganized, and revitalized and it’s now taking on a new identity as a pilgrimage site for people curious about Methodism and how history shapes today’s faith.

Stories are being brought to life in new ways and shared memories are a new tool for deepening discipleship under the leadership of the Rev. Bonnie McCubbin, the Baltimore-Washington Conference Director of Museums and Pilgrimage, and Sabrina Tarver, the archives administrator and librarian.

McCubbin and Tarver view the museum as a place of spiritual discovery and adventure to which people can take small pilgrimages or journeys of faith. “It’s a place where you can experience the holy, where you can take in the breath of your ancestors,” McCubbin said.

She hopes that being able to glimpse and begin to understand the excitement and fervor of early Methodists as they sought “to spread scriptural holiness throughout the land” will ignite visitors’ spiritual imagination.

“Each person that’s featured in the museum played a part in our story,” McCubbin said. “Each person was doing what they could to spread the Gospel message. Each had a role to play, and when you leave here, we hope you’ll understand more about the role you have to play in God’s story.”

As they reorganize the space and its hundreds of thousands of documents and artifacts and elevate the museum into the 21st century, there is a sense of amazement and discovery, McCubbin said. Recently, she opened a drawer and found a pitch pipe that belonged to Lorenzo Dow, an early Methodist lay preacher.

Dow abhorred slavery and would preach among the freed slaves in Georgetown and throughout the nation. His autobiography was once the second-best-selling book in the U.S., following the Bible. The dramatic evangelist would “use his pitch pipe to get people into a dancing frenzy and convert them to Christ,” McCubbin said.

For Tarver, one of her favorite things has been working with letters from Nellie Logan to her brother, the missionary E. Stanley Jones, who served in India. In 1938, Time magazine called Jones “the world’s greatest missionary.” However, Tarver enjoys “the images of the humanity” that the sometimes playful, sometimes heartfelt, letters between the siblings conjure up.

This opportunity to learn more and grow in discipleship has inspired McCubbin to expand on and personalize the museum’s offerings. In addition to the standard tour, which walks people through the origins of Methodism through the 1930s, guides will now offer customized tours for confirmation classes, church groups and individuals with specific interests. Advance notification is all that’s needed, McCubbin said. She also encourages people to link their visits to Lovely Lane with one or more of the 33 other related historic sites within the bounds of the Baltimore-Washington Conference. Virtual tours are also available with advance notice.

McCubbin hopes people begin to take advantage of this opportunity for pilgrimages to Lovely Lane and other sites. “This is one way to connect to the holy,” she said, “and to find ways to transformations of your own in the process.”

Tours of the Lovely Lane Museum, at 2200 St. Paul Street in Baltimore, are available upon request. The museum is open Tuesday, Wednesday, and Thursday from 9 a.m. to 5 p.m., on Friday from 9 to 2 p.m., and after the worship service on Sunday at Lovely Lane UMC, which is upstairs from the museum. To make a reservation, or request more information, contact or 410-889-4458.