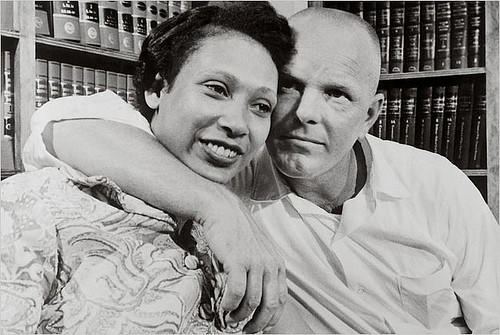 June 12 was the 50th anniversary of the Loving v. Virginia case, in which the Supreme Court ruled unconstitutional any state laws barring marriage based on race. This is of special significance to me as my wife, Dana, and I are an interracial couple living in Maryland, which also had anti-miscegenation laws which would have prevented us to marry in this state, or to be legally recognized had we lived in that time.

June 12 is a day I celebrate, and a day that I deplore. This day reminds me of my ignorance, and the willful rejection of so many of us to take seriously the blatant, fundamental issues in our society. It also reminds me of the danger of relying on government alone to fix social problems.

Race had never been a major focus of my life. I was raised in predominantly White northern Illinois by parents who were largely neutral about racial issues. As a family, I think we always believed that a person's worth was largely self-determined and that 99 times out of 100, each person had an equal opportunity to make of themselves what they wished, and if they didn't, blame rested largely on their shoulders.

Then I met Dana.

I didn't understand what I was experiencing at first, when people would stare at us, or when I'd watch her get trailed in a retail store by a security guard, or when the fast-food cashier, not knowing we were together, was rude to her, but brightened as soon as I stepped up. When her niece, nephew and I were jeered-at twice within a 20-minute period walking down a street in Raleigh, I chalked it up to “The South.” But as more and more of these experiences stacked up, I started to see something that I simply didn't understand before: Being Black in America IS a fundamentally and demonstrably different experience than being White in America.

Consider this: my father didn't graduate high school. His mother likely had Bi-Polar Disorder or something of the like and was institutionalized from the time he was around 12. He was moved from downtown Chicago to a dirt-floored farmhouse in Northern Wisconsin right around that same time. He worked his tail off to attain and obtain all he had. My mother grew up on the south side of Chicago with an overbearing mother and a hard-working father, and didn't graduate high school, either. My family is a classic case of the “American Dream” sort of path, so far as that goes. But through all the hardship, all the difficulty that they had getting to where they arrived, they never had the cards intentionally stacked against them.

Dana's family had a fairly similar background. All the way back to the record of sale of one of her ancestors as a “wedding gift” just before the end of slavery (which is as far as we have been able to trace), Dana's family is a mix of hard-working farmers and laborers, with one, I think, major difference: Dana's great-great-great-grandparents lived among those who owned them.

And let's examine today: Laws were passed to bar discrimination and to annul previous laws demanding or allowing segregation, etc. Mind you, these were passed at the federal level, because the powers in the states that had these laws refused to do so themselves. It is interesting to note that the last anti-miscegenation law wasn't repealed until 1999... do you think all this changed enough minds?

With today's open resurgence of what I would argue was an undercurrent of resentment and racism in the form of the Alt-Right movement and others, and with the obvious pandering and passive-aggressiveness from both political parties over the last 50 years, along with covertly and overtly targeted legislation from lawmakers over that time, I would say no.

My daughter, Lyra, will be born this summer. I want to see her grow up and live in a nation full of people genuinely capable of looking beyond the superficial to see the content of her character. But I know that the only genuine path to this is to be a living example of this every day, in everything I do. You might say that it only matters to me because I now have skin in the game. But what I have learned is that we all have a stake in this, and we always have. If the Loving case and the broader civil rights movement has taught us anything, it’s that we cannot wait for our institutions to be ethical for us, we cannot allow our churches to be loving and open for us, we cannot expect another to do make the difficult choices on our behalf.

Friends and family, this isn't about guilt. It is about facing a reality that is there in front of us: that if we believe in liberty and justice for all, it REQUIRES us to recognize that there still are serious social issues which cannot alone be solved by government. It is acknowledging that our experiences in this country can and do differ based on something as arbitrary and inconsequential as the color of our skin... or our gender, or our sexual orientation/identity, or our country of origin. Solving these issues takes personal involvement and investment on a daily basis to make a difference in your communities.

Moreover, listen to your neighbors and don't allow your thoughts to be couched in whatever political party you adhere to. Have the courage to name the flaws in our own perceptions and actions, and openly stand up for those affected by racism, bigotry, and violence in our communities. We cannot afford to stand idly by when there is a real chance that law and policy toward race might officially regress back toward the pit from whence it came. What more eloquent a name can there be to exemplify this struggle: Loving v …..