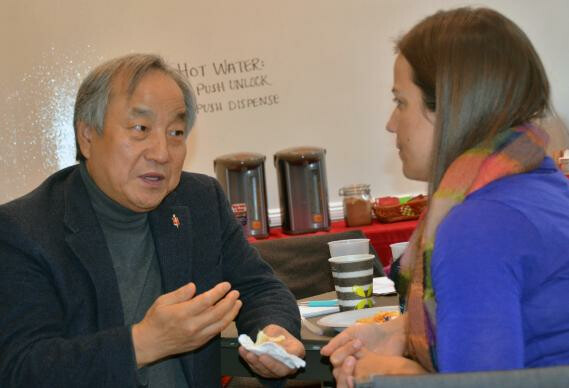 Korean-American United Methodists are adding their voices to the growing number of people calling on the U.S. government to tone down the rhetoric on North Korea.

At a three-day seminar in Washington, Nov. 13-15, more than 60 people came together to learn about the situation from policy experts and to engage their lawmakers on Capitol Hill.

“Peace on the Korean Peninsula,” held at the United Methodist Building, was co-sponsored by the United Methodist Board of Church and Society and the Korea Peace Committee. During the seminar, participants engaged in Bible study on learned how to be a faithful advocate, discussed nuclear security in Korea and discussed the current state of relations between North Korea, South Korea the United States.

Aimee Hong, director of the United Methodist Seminar Program at Church and Society, said the seminar was designed to address the many issues the Korean peninsula is facing set in a context of the area’s history and culture.

“It is important for United Methodists to be educated about these issues, and to educate others,” Hong said. “There is a lot of tension and fear without a lot of knowledge about what is really happening. We need to be in conversation with each other but also with members of Congress.”

Hong noted that The United Methodist Church has a long-standing resolution in support of reunification and peace in Korea and that the church’s Social Principles also state that war is “incompatible with the teachings and example of Christ.”

Wisconsin Area Bishop Hee-Soo Jung preached on peacebuilding and peacemaking during the opening worship service. In his sermon, the bishop explored ways to bring peace not only on the Korean peninsula but also around the world.

Contained in Jesus’ teaching from the Sermon on the Mount is both the problem and the solution, the bishop said.

“What does it mean to be ‘blessed?’” he asked. “The Hebrew word means ‘to bend the knee in deference; to honor, to show humility and respect.’ And the Hebrew faith held as a core value that those who are blessed of God should be a blessing to others.”

Mercy, justice, meekness, humility – these are not idealistic hopes, but they are blessings – they frame who we are and who we aspire to be, he said.

The bishop, who noted that the United States is still technically at war with Korea (an armistice was signed in 1953, but there has been no official declaration of an end to the war), said that it wasn’t enough for people to be peacemakers, they had to become and be peace-builders, even to the point of being peace-crusaders.

“There is such a heightened tension right now between the U.S. and the DPRK (Democratic People’s Republic of Korea) — North Korea,” the bishop said in an interview. “There’s a lot of anxiety.”

Jung — president of the board of directors for the United Methodist Board of Global Ministries — serves as an advisor to the Korea Peace Committee. That started 24 years ago during a time of great famine in North Korea, offers humanitarian aid. It is a grassroots United Methodist group, Jung explained, supported by several Korean United Methodist churches in the United States.

A current effort for the group, he said, is supporting cataracts surgery for more than 10,000 people this year in North Korea.

The committee is also intentional about building relationships between North Koreans and North Americans. The bishop traveled to China last December to help deliver a truckload of rice and children’s clothing to North Korea following a massive flood in the northeastern part of the area. He did not enter the country but stood at the border.

“It was so moving,” he said. “It was a tearful experience for me.”

The Korean-born bishop, who came to the United States in 1982, still has family in Korea. He visited North Korea two years ago as part of a peace delegation from the World Council of Churches. They visited house churches, two formal churches a Roman Catholic church, all in an effort to strengthen relationships. “As a church leader, it was time for me to go,” he said. 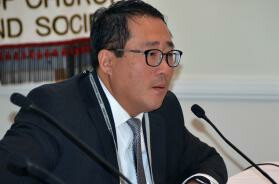 During the seminar, people heard from policy experts and faith leaders involved in humanitarian efforts. One such policy expert was Jae Ku, director of the U.S.-Korea Institute at the School of Advanced International Studies at Johns Hopkins University.  He told participants that the situation today is on the brink of nuclear war, but that he thinks cooler heads will prevail.

North Korea, he said, has tested at least six nuclear devices, and they continue to test short-range to intercontinental missiles. Ku noted that if they didn’t have the capability to strike San Francisco yet, they should have it in the next 12 to 18 months.

Ku said he takes North Korea at its word because, he said, “when they say they will do something, they have shown in the past, they do it.”

The battle of words between the leaders of North Korea and the United States is not helping the situation, Ku pointed out.

“When we Tweet military threats,” he said, “it limits our ability to get off on an exit ramp later.”

“The ball is in North Korea’s court,” Ku said. “They have gone 52 days without doing anything. If North Korea says they want to acquire ballistic missiles to hit the continental United States, they will. But only after they acquire that, they will talk to us?”

In the next six to 12 months, Ku said, there has to be a way out. “As Christians, we have to find a way to get our leaders off the ledge.”

Church and Society the plenary and panel presentations, available for viewing on the agency’s Facebook page.

Alsgaard is managing editor in the Ministry of Communications for the Baltimore-Washington Conference. To get more United Methodist news, subscribe to the free Daily or Weekly Digests.