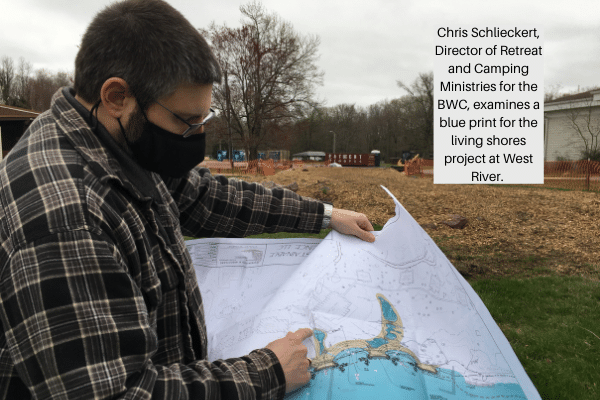 Over the last several decades, a wooden bulkhead is all that stood between the waters of the West River and the West River Camp and Retreat Center. The Baltimore-Washington Conference facility needed to do something to repair it lest it pose any danger to campers, guests, or staff.

Now, not only are they taking down the old boards, but they’re installing a major “living shoreline” project that will transform the waterfront.

This $1.2 million project, funded through two grants and without any BWC Mission Share dollars, is the continuation of a similar effort that’s been going on for years, according to Chris Schlieckert, BWC’s director of Retreat and Camping Ministries.

The project, Schlieckert said, will forever change the way camp is experienced at West River.

“Certainly, educationally and programmatically,” he said, “because we’ll be incorporating this into all of those programs that we already do. But it’s going to transform the waterfront here for us. People will be able to engage that much more with the water and with the river, and it will be a more natural environment for them to experience. It will help people be in touch with nature and with God.”

Creating a living shoreline first began years ago, he said, out near “The Point” and the family cabins because of erosion, and it ended at the “L dock” where they host their paddle sports such as canoeing and kayaking.

“We’ve done the far side of the property,” Schlieckert said. “What was needing to happen was to look at that main stretch of the property… from the L dock all the way past the retreat center to where our marsh trail starts.”

The living shoreline project has been in the works for about four years, Schlieckert said. Several different groups had to approve the concept and then funding had to be secured. “It’s been quite a process,” he said, “but it’s been amazing to see it coming together here.”

Schlieckert said that there were many reasons to do this project now, chief among them the failing bulkhead. “It’s deteriorating because it’s decades old.”

The living shoreline, however, is perfect for West River because it fits with being good stewards of the earth, he said.

“There are a lot of benefits to putting in a living shoreline as opposed to just replacing the bulkhead,” Schlieckert said.

There are many elements to a living shoreline. Schlieckert said that part of the design provides habitat for fish and wildlife.

“With a bulkhead, there’s no area for animals to live and have homes,” he said, “because it’s just a wooden wall.” 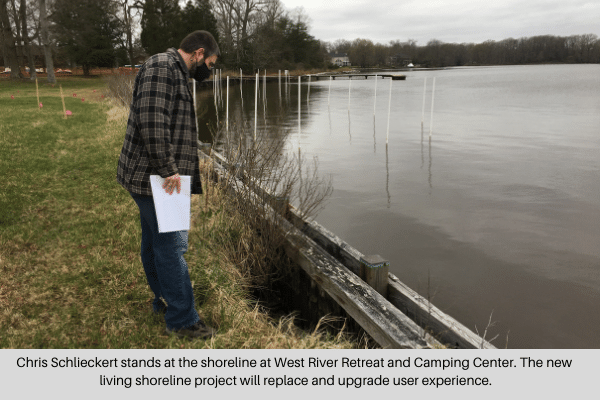 Another part of the living shoreline project is to help manage water runoff from the parking lot. Right now, that water simply drains directly into the river, pollutants and all.

The new design creates a series of step-ponds – water retention areas – that will allow the water to drain from the parking lot but be naturally filtered before it joins the river.

“Most of the time, these (ponds) will end up looking like a dry creek bed,” Schlieckert said. “But as we get a storm, then those fill and help filter the water.”

There will be two such systems like this at the site, one on either side of the Dining Hall.

Another piece of the living shoreline is a “shingle beach.” That is, a gently sloping beach – once the bulkhead is removed and tons of dirt – that will start with specifically sized rocks at the top and growing smaller as they head down to the river. At the waterline, it will be all sand.

This is a new design for living shorelines, Schlieckert said, which will make it stand up better to tides, wind, and waves. And since this is new, he added, it will be used as an example by the Department of Natural Resources to educate more people about them.

“What this will give us is more access to the water here at camp,” Schlieckert said. “It will be a protected area because of plant life, but there will be access points so people can get to the water.”

“It helps the environment, it helps the programming here at West River, and it’s phenomenal.” 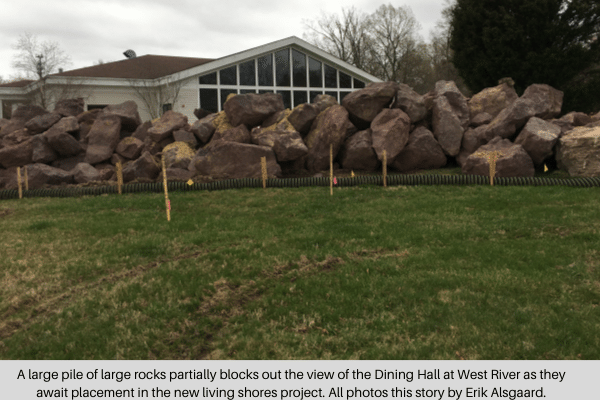 Even though chunks of the property are in the process of being dug up, Schlieckert said all the work will be done in time for summer camp to open in June. (To learn more about summer camp, and to register, visit https://www.bwccampsandretreats.com/ .) Actual construction will take about four weeks, he said. “We’ve told them that they have to be done by Memorial Day.”

Schlieckert and his staff are in the process of erecting a webcam atop Ehlers Hall so that people can watch the project unfold. That is expected to be up and running around April 10.

“I think this project will help us fulfill that.”