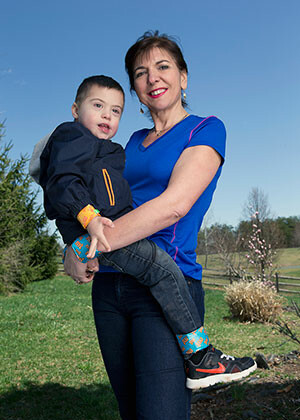 Isabella Yosuico holds her son, Isaac, the inspiration behind MightyTykes.

When self-described special needs “mompreneur” Isabella Yosuico gave birth to her son Isaac, who has Down syndrome, she could never have imagined where it would lead.

Today, Yosuico, who attends First UMC in Berkeley Springs, W.Va., (pastored by the Rev. Doug Hoffman) with husband Ray and sons Pierce and Isaac, is marking two major milestones for the company inspired by Isaac.  MightyTykes is starting 2016 off having landed its first international reseller as well as leading online retailer wal-mart.com in January.

Yosuico was told at her 12-week prenatal check-up that Isaac was likely to have a genetic condition. When a diagnosis of Down syndrome was confirmed shortly after Isaac’s birth in 2010, Yosuico learned more about the challenges he would face, including hypotonia or poor muscle tone, common in kids with Down syndrome and many other conditions.

Inspired by the wrist and ankle weights she often used while running on her treadmill, she created a tiny set of weights with some leftover fleece and sandbox sand and started using them with tiny Isaac, soon seeing results.

Isaac’s physical therapist was impressed and urged Yosuico to explore manufacturing them. After much research, Isabella developed some prototypes to share with parents and therapists at hospitals from the US News & World Report Honor Roll of Top  Children’s Hospitals.

Yosuico soon learned that the weights could help with many different conditions and challenges including prematurity, autism-spectrum disorders, sensory processing disorder, toe-walking, cerebral palsy, tremors and simple weakness. Encouraged by the positive response, she developed a business plan to secure an economic development loan, launching a company called MightyTykes in May 2014.

In just 18 months, sales have steadily increased and the company has enjoyed a growing following, accolades and extensive media coverage including being singled out during West Virginia Governor Earl Ray Tomblin’s 2015 State of the State address, having its story featured in Guideposts magazine in July 2015, and securing several national catalog resellers.

“This has been an extraordinarily challenging, humbling and really rewarding experience,” Yosuico said. “Hearing how the weights are helping kids all over has kept me going during the low points and God has been so faithful, even when I wasn’t.”
Yosuico explained that she has clearly seen God’s hand in the process all along.

“God continues to reveal himself to me,” she said, “from seeing how he’s personally prepared me to do this, marshalling all my life experience and faith, his miraculous provision of resources and amazing people to help, and just doing exceedingly and abundantly more than I could ask for or imagine.”

MightyTykes has also afforded Yosuico some speaking and writing opportunities through which she’s  been able to share the Gospel and her own testimony, which she feels is an awesome privilege.

No matter what happens, Yosuico affirms that the greatest gift of all has been Isaac himself. “At first frightened, angry and disheartened,” she said. “I could never have imagined how much joy and wisdom Isaac would bring to me, my family, and all who meet him. He’s an extraordinary blessing who just keeps on giving.”