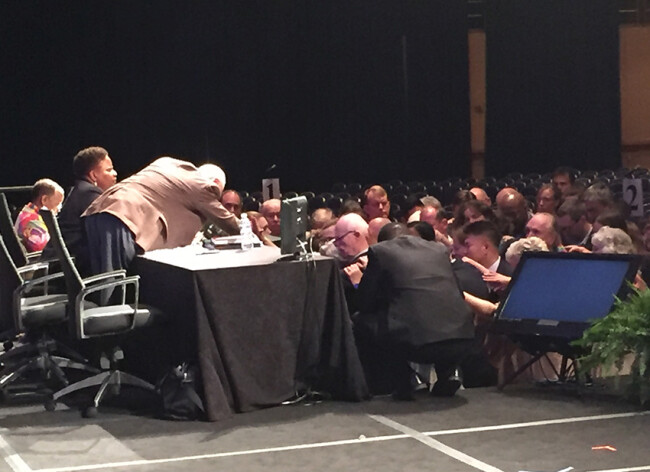 Clergy pray around Phil Wogaman, after he surrendered his credentials during the clergy session Wednesday afternoon.

J. Phillip Wogaman, who was going to celebrate the 60th anniversary of his Elder’s ordination next month, unexpectedly turned in his clergy credentials to Bishop LaTrelle Easterling Wednesday afternoon during the BWC’s clergy session.

Wogaman made the gesture during a moment of personal privilege. He said that his “heart breaks” for T.C. Morrow, a lesbian who was not approved for ordination as a Deacon in 2016 and who was not brought forth to the clergy session this year, and for “others like her” with the gifts and graces for ordained ministry “who have been excluded as a result of bad church law, applied legalistically and hurtfully.”

The United Methodist Church prohibits the ordination of self-avowed, practicing homosexuals, and has since 1972.

Morrow, who sought ordination again this year, had her status remain as a certified candidate after a May 2017 Judicial Council ruling stated that Boards of Ordained Ministry were required to ask about a candidate’s sexual practice as part of their examination. The BWC’s BoOM took that decision into account, said the Rev. C. Anthony Hunt, when it reached its decision not to recommend her to the full clergy session.

In a statement, Hunt said, “In our discernment, the Board recognizes that the Judicial Council, in its recent declarative decisions, did not change, add or delete disciplinary language or requirements to the candidacy, licensing, and ordination processes, and that Boards of Ordained Ministry are not at liberty to disregard qualifications for licensed and ordained ministry in its evaluation and examination processes.”

The 2016 BoOM, in bringing Morrow to the clergy session, decided that asking about any candidate’s sexual practice was not part of their examination.

The Board, Hunt said in a statement after the clergy will form a task force to “review our policies and procedures to ensure that we appropriately examine our candidates.” In the meantime, he said, the Board will follow the Book of Discipline as per the Judicial Council’s ruling in making a “full examination” of people seeking local pastor licenses, commissioning and full membership.

Bishop Easterling, who repeatedly asked Wogaman to reconsider his decision, tearfully accepted the credentials after he placed them in a sealed envelope in front of her.

After receiving the credentials, Bishop Easterling called for a moment of prayer. Dozens of clergy came forward and laid hands on Wogaman as the bishop prayed.

Wogaman, 85, who counts in his ministry resume serving as a delegate to four General Conferences, as senior pastor at Foundry UMC and as Dean of Wesley Theological Seminary, said in a statement after the session that “in the twilight years of my life and ministry, I must join with T.C. and others outside the clergy circle by surrendering my credentials today. I do this with a heavy heart. I’ve had to ask myself, ‘How could I remain inside the association of clergy when someone like her (Morrow) must remain outside?’”

Wogaman said he began thinking about this course of action after the recent Judicial Council decisions. It was after they were announced, he said, that Morrow was informed by the BoOM that she would not be brought forward this year.

“That really moved me,” he said. “I have known her for many years. (Morrow is a member of Foundry UMC.) She is highly qualified.”

Wogaman, who did not notify Morrow of his intentions beforehand, said that he did not take this decision lightly.

“I really wanted the point to register that this is not just administrative decision making, routinely,” he said. “This is very serious; it bears upon the character not just of the conference but the whole church. There’s something here that transcends law.”

Wogaman stressed in his statement that he hoped others who may be tempted to follow in his footsteps would not do so. “I beg all of you to remain within the circle,” he said. “If you think as I do, let me be your representative (outside the circle).”

The Rev. Kara Scroggins, who was ordained an Elder June 2, spoke on the floor of during a moment of personal privilege. She said Wogaman’s actions had affected her, but that she was staying in the system to affect change.

“I am joyful to be a part of this connection, to be recommended and ordained for servant ministry with and among you,” Scroggins said. “Today, I choose to stay. If I were to walk away, it would be because there is simply too much pain, too much brokenness, to stay. And I don’t know a God, I don’t serve a Savior, who ever walked away from a community’s pain, or shrank back and said, ‘too broken.’”

Ann Brown Birkel, a member of Foundry UMC, where Wogaman served as her senior pastor, also spoke to the conference about his actions.

Calling it a “dark day” because Wogaman surrendered his credentials and Morrow was not recommended by the Board, Birkel recounted the BWC’s history of advocacy in this area.

Yes, she said, “we have taken a step . The Baltimore-Washington Annual Conference has a unique role to play due to our history — our diversity — and our experience on this journey at this critical moment in the life of our church. We should model the inclusion we have endorsed for the church at large as we move toward the special called General Conference.”