By the Rev. Gustavo Vasquez | UMNS 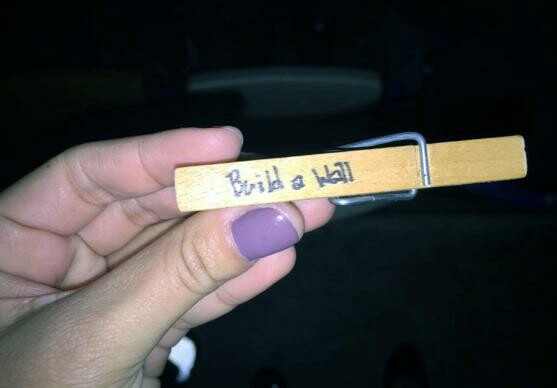 One Hispanic/Latino youth attending Pilgrimage 2016, a youth event in the North Carolina Conference, had a clothespin placed on him by an unknown person, with the words “I Love Trump” on one side and “Build a Wall” on the other. Photo courtesy of Stacy Guinto-Salinas.

A few hundred people walked out of a North Carolina youth event during a session dealing with pain and racism felt by young Hispanic-Latinos, who had earlier been victims of intimidation, conference officials said.

The Rev. Edgar Vergara, chairman of Hispanic Latino Ministries for the North Carolina Conference, said young people wearing “Make America Great Again” hats in support of President-elect Donald Trump had harassed the youth during the event. “They have carried out hostile actions and contempt for our young people. … We are concerned and disappointed by this situation,” Vergara said.

Early in the Pilgrimage 2016 event, attended by about 5,000 students between sixth and 12th grade, some people were using the event hashtag #nccp16 in order to promote another hashtag, #buildawall, according to Derek Leek, director of communications for the conference.

Leek said event leaders responded with a statement explaining the hashtag was to be used to share fun things happening around the event, that the conference affirms all people as valuable, and that statements against people based on race should not be tolerated. Leek said event leaders talked with two of the students who posted a photo using the #buildawall hashtag.

Leek said one Hispanic/Latino youth had a clothespin placed on him by an unknown person, with the words “I Love Trump” on one side and “Build a Wall” on the other.

The Pilgrimage event uses clothespins for people to “pin” their peers with a Bible verse or words of encouragement.

The conference posted a statement on its Facebook page that the clothespin “message caused pain and humiliation. The Hispanic/Latino community who had come to experience the love of Christ and acceptance instead felt deep harm.”

“A hurtful message was sent at NCC Pilgrimage targeting our Hispanic friends in Christ. However, strong and faithful leaders — younger and older — are leading the way toward full welcome, gentle compassion, and reconciliation. … We embrace with love our spiritual family in all our beautiful diversity — particularly our Hispanic brothers and sisters at this time — as well as others who are Asian, African-American, Native American and Anglo.”

The Hispanic-Latino youth also reported that some youth had attempted to intimidate them by staring at them, Leek said. At one point, Hispanic leaders mentioned that someone walked in front of them, then slowed down and gestured at them, he said.

Keynote speaker and author Romal Tune addressed the clothespin incident and related it to bullying during the morning session. Afterward, the leaders of Pilgrimage “asked everyone to covenant together to not use the for this event because it was harmful,” Leek said.

During a break on Saturday, the event organizers met with Hispanic/Latino leaders at Pilgrimage. The plan was to allow space at the event to name racism and allow someone from the Latino community to name their hurt.

Then, Stacy Guinto-Salinas, a student of theology at Duke Divinity School and part of a team of chaperones who accompanied the youth to Pilgrimage 2016, offered a witness in which she shared her experience of being bullied as a Mexican immigrant. She moved to the U.S. at age 9.

It was during her witness that a few hundred people walked out, Leek said. Most were leaving because politics was mentioned and some felt they were being called racists for voting for Trump, but others left in protest of injustice, Leek said.

“We do not wish to diminish (Guinto-Salinas) naming her reality and the leadership team did not expect that politics would be the brought up at the end of her talk,” said the conference’s statement on Facebook. “At the same time, we are deeply grieved that many brothers and sisters who voted for, or who came from families supporting President-elect Trump, who had nothing to do with the episode, felt diminished and negated by her remarks and felt they had been called racist.”

A few of the youth counselors from Pine Valley United Methodist Church in Wilmington, North Carolina, walked out of the Saturday session.

“One was a parent with his youth and didn’t feel that that was an appropriate message for them to be discussing, so he pulled his two kids out and they went out to the lobby and got ice cream, but they didn’t leave the arena,” said Charles George, director of family fellowship at the church.

The youth group did return the next morning.

Pilgrimage has been hosting young people and their mentors at the Crown Coliseum in Fayetteville, North Carolina, for 23 years. It is a weekend event that is meant to inspire youth.

However, this year’s experience has been different for some Latinos.

“We came to this meeting with great enthusiasm and very because this year the number of young Latinos has surpassed the previous years and more than 90 of our young people are here. Many of them are citizens of this country, their parents have no documents and amid uncertainty and trouble, looking at her Methodist church (for) spiritual support, brotherhood and this is what we are,” said Vergara.

The Rev. Gustavo Vasquez is the director of Communications Hispanic/Latino IMU. Contact him at 615-742-5111 or .