Originally posted by the General Commission on Archives & History 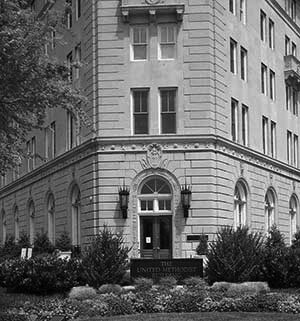 On Capitol Hill in 1917, Rev. Clarence True Wilson spotted a muddy, billboard-cluttered corner lot. Wilson, executive director of the Board of Prohibition, it was the perfect site for Methodism's social reform presence in Washington, D.C.

Construction began on Nov. 17, 1922. A five-story building, located at 100 Maryland Avenue, was completed in 1923 at a cost of $650,000 to house the Methodist Episcopal Church offices, especially the Board of Temperance, Prohibition and Public Morals.

Money for the project was raised through individual and church gifts, some as small as 15 cents. 70% of the donations were from women. Wilson’s wife, Maude, served as officer, property manager director of operations. She also drew the original plans, which were approved by the board and given to the architect for development.

The United Methodist Building is the only non-government building on Capitol Hill. Designed in Italian Renaissance style and constructed of Indiana limestone, it was the first Protestant agency in Washington, D.C.

In 1931, the board added on the 110 building. Money from renting its apartments expanded the social witness and action of the church. Its 55 apartments were rented in less than 30 days, despite the competition of the Great Depression. Soon after that, the 110 building became a financial burden, and it was only through generous friends of Wilson that the 110 survived the Depression in Methodist hands.

The building has played a significant role at volatile points in the nation's history, including the 1963 March on Washington led by Dr. Martin Luther King Jr., the 1968 Poor People's March, the farmworkers' boycott, years of protest against the Vietnam War, ERA marches, the 1978 Long Walk of Native Americans, the 1978 and 1979 Farmer’s Tractorcade, and the 1989 Housing NOW! March, and the 1996 Stand for Children March that included almost every bishop in the denomination.

Special points of interest at this Heritage Landmark: Simpson Memorial Chapel - Named for Bishop Matthew Simpson, a close friend of President Abraham Lincoln, has served as a place of sanctuary and prayer on Capitol Hill. Within these walls, leaders from both parties and all faiths have found the strength and courage to act on their convictions. The Wilson Room - Named after founder Rev. Clarence True Wilson and his wife, Maude. The Americans with Disabilities Act was written here.

Special events: Chapel service in the Simpson Memorial every Wednesday at 12:10

Area attractions: The United Methodist Building is across the street from the Supreme Court and the Capitol Building. The Library of Congress, National Mall, and Smithsonian Museums are a short walk. Asbury United Methodist Church is a short metro ride away on the ride and was a stop on the underground railroad. Harriet Tubman hid runaway slaves there, on their way to the northern United States and later to Canada. Foundry United Methodist Church is a slightly longer metro ride away on the red line. President Abraham Lincoln became a Life Director of the Methodist Missionary Society, and President Rutherford Hayes attended Foundry nearly every Sunday during his term. President Franklin Roosevelt and Prime Minister Winston Churchill attended a special service at Foundry on December 25, 1941. President William Clinton, Secretary Hillary Clinton, and their family attended regularly.

Location:  Located within the boundaries of the Baltimore-Washington Annual Conference, the buildings are located at 100 &110 Maryland Avenue NE, Washington, DC 20002.

Food and Lodging:  There are many food and hotel options in Washington, D.C. If you are visiting the United Methodist Building, you can eat at the Senate, the Supreme Court, Union Station, or at a restaurant along Pennsylvania Ave.  There are plenty of hostel and hotel options in Washington, D.C. Hotels are more expensive during the Cherry Blossom festival and other busy times.

To learn more about United Methodist church history in this area: