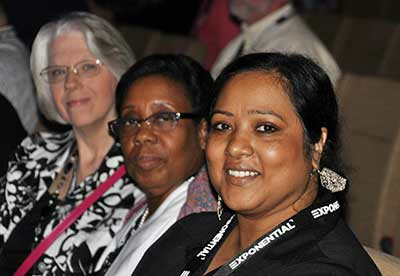 After fumbling to get my seat belt fastened on the plane, I was ready to go to Orlando, Florida, to attend the Exponential Conference at First Baptist Church. My colleagues, Olivia Gross, Melissa Lauber Erik Alsgaard, were on the same early morning flight.

At the conference, the music was lively, plenary speakers were exceptional and I filled my notebook with handwritten notes from the workshops attended. This conference was primarily for church planters, but not all the content dealt with church planting.

There were workshops on mission, evangelism, social media applications and discipleship. I work as the district administrator for the Baltimore Metropolitan district and attend Liberty Grove UMC in Burtonsville. I am grateful for the opportunity to attend the conference. I believe that we are called to be the Body of Christ and each one of us can make a difference in this world. In fact, we are all called to be and make disciples for Christ.

Exponential’s theme was “5IVE” (FIVE), which is a challenge and goal for pastors and leaders to reach a level five church, which is a multiplying church. Some of the points that spoke to my heart were:

As I think about taking risks, it seems fitting that the conference was in Orlando, the place where millions of people from around the world visit Disney World. What if Walt Disney didn’t take risks? What if he didn’t have the sense of urgency to create so that people will be intrigued, inspired and look for hidden Mickey’s? What if he didn’t work collectively with so many artists and savvy people? Suppose he resisted the wind? Maybe there was a Barnabas in his life who encouraged him.

We all fail at something or another, even in our church. We have to get back up, fasten our seat belts, and “Dream Big,” which is next year’s Exponential theme. Disney dreamed big and so can we, the church. Whether we are flipping burgers or leading a congregation, we all have a part in building God’s Kingdom.

*Christine Kumar is the district administrator for the Baltimore Metropolitan District.