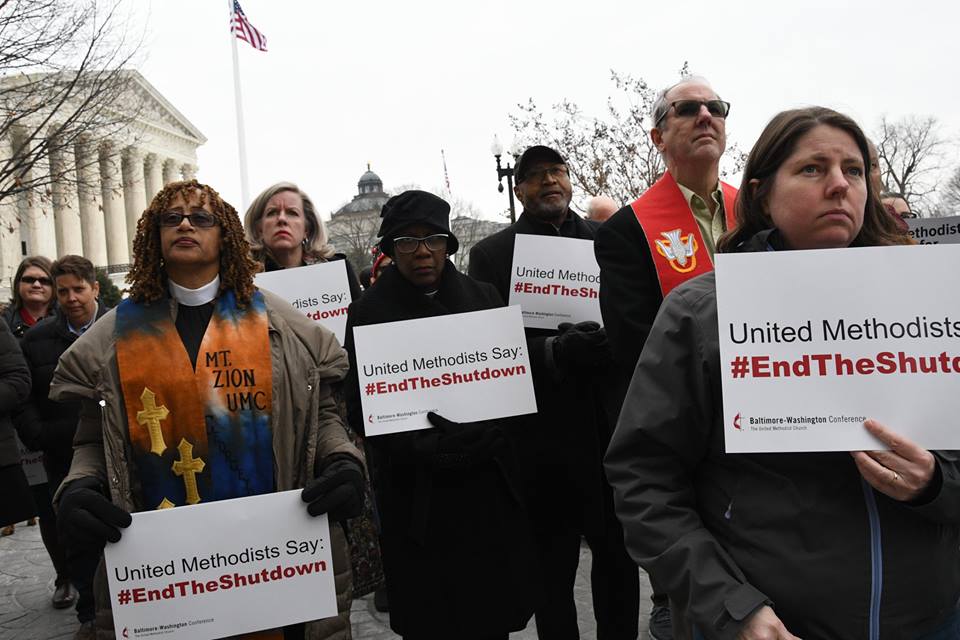 “We know that there’s a human face on these political machinations,” Bishop Easterling said. “We know that there are real human beings whose families are impacted, who really are making decisions between food and medicine.”

These people hold jobs, the bishop said, but they are concerned about when they are going to be able to go back to work. To address this situation, the bishop and other faith leaders wrote a letter and hand-delivered it to the White House, to Speaker of the House Nancy Pelosi (D-Calif.), and Senate Majority Leader Mitch McConnell (R-Ky.).

Bishop Mariann Budde, Episcopal Bishop for the Diocese of Washington, read the letter to start a press conference on the steps of the United Methodist Building, across the street from the Capitol.

“I reached out to my peers and colleagues across the area,” Bishop Budde said, “because I knew that all of us were feeling that the silence from our government during the shutdown was unacceptable. There needed to be some voice, some outcry, about the suffering the shutdown is causing.”

The response, she said, was immediate. The letter was drafted and posted online, which, as of Thursday night, had more than 930 signatures.

The letter issues a call to justice and hope during the ongoing federal government shutdown. “We are deeply concerned for all those who lives have been thrust into economic uncertainty,” it states. It references "the disproportionate burden the shutdown has placed on federal employees and contract workers" - many of whom are leaders in local faith communities. It states, "The long-term consequences of the shutdown are mounting, and we respectfully add our voices to those calling for it to end."

The faith leaders also addressed the humanitarian crisis for migrants at the U.S. Southern border, writing: "On the issues of border security and our immigration policy, we agree with President Trump that we face a crisis of heart and soul, though we differ dramatically in our understanding of it." 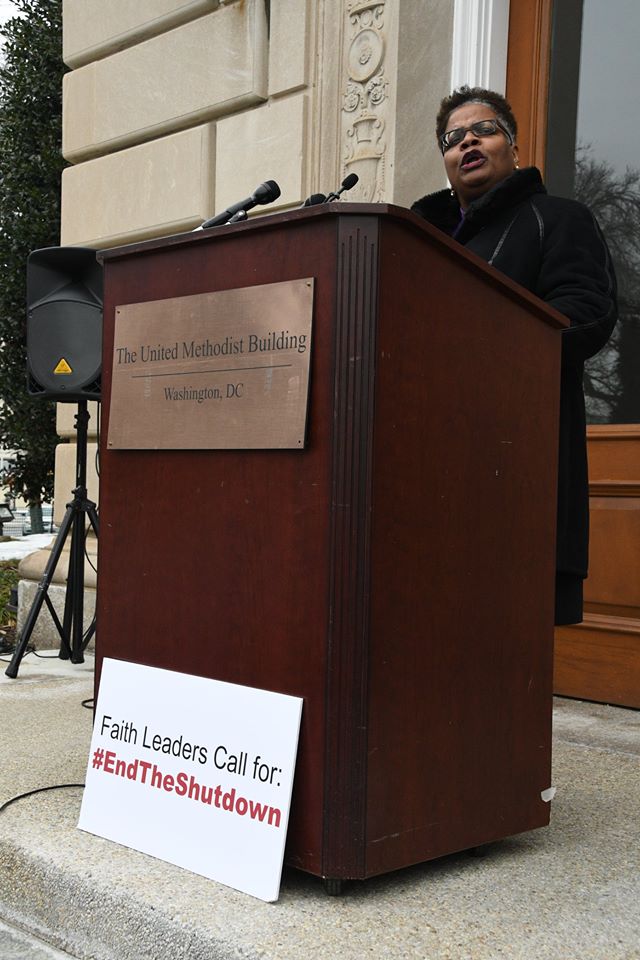 Human migration, Bishop Easterling said in her statement at the press conference, is as old as human history. The bishop serves as a member of the Council of Bishop’s Immigration Task Force.

“There is no ‘us’ and ‘them,’” she said, quoting from the church’s Social Principles. “There is only one common humanity, created of God and beloved of God.”

She called upon the president and key lawmakers to re-enter negotiations, reopen the government, reinstate the furloughed employees and allow them to resume “the dignity of work and the means to care for themselves and their families.”

The letter states that the crisis is multi-faceted and complex and will require solutions equally diverse. "In the meantime," they add, "people are suffering and we cannot turn away."

Several speakers noted that those most hurt by the shutdown are the most marginalized in society.

“Even as President Trump signed a bill guaranteeing back-pay to some, those who are contract employees have absolutely no guarantee of back-pay or even returning to their jobs at all,” said Bishop Easterling.

Susan Walters and Karen Collins, members of Emmanuel UMC in Laurel, attended the event. Both are employees of the Department of Justice’s Bureau of Prisons main office in D.C. Both are furloughed.

In this time off, they say they’ve gained a new realization about how much they value their friendships at work, their daily routines, and the purposefulness that accompanies being engaged in meaningful work. In the weeks of not reporting to an office, they’ve enjoyed time spent working for the church. The uncertainty and bitterness that accompanies the partial government shutdown for some people, has drawn them more deeply into their faith.

“God is a guiding force for us,” Collins said. Their faith continues to give them hope. “God may be the only thing strong enough to move people past their differences and pull the people on the different sides of this together.”

For both women, the shutdown has moved past politics and the budget. “It’s about people,” they said, “real people who are dealing with real consequences.”

At Mount Vernon Place UMC in the heart of Washington, the ripple effects are noticed every day by the church’s pastor, the Rev. Donna Claycomb Sokol. It’s not just the furloughed government workers, either. She sees it in the empty chairs at the restaurants, the school children who come for field trips and face closed museums, and the hot-dog vendor on the corner who’s had to close-up shop.

“I keep asking ‘who’s being impacted’ at my church and how we can help,” Claycomb Sokol said. She’s starting to notice the psychological toll the shutdown is having. “It’s one thing to be off for a few days; but when you’ve been off for a few weeks… and you’re not able to go and contribute to society, or even have a reason to get out of bed, the psychological impact, I believe, is starting to show.”

Mt. Zion UMC in Georgetown has several federal government employees in their congregation, said the church’s pastor, the Rev. Johnsie Cogman. That includes her husband, who is currently working for Homeland Security without pay.

One of the things her church is known for is food, Cogman said, and that includes feeding the homeless and the community every Saturday. This weekend, they’re expecting many more people to walk through their doors. Church members are also standing by with hot meals when others let them know of the need.

“We’re just praying that God would touch the hearts of our president and all the government leaders, that they would do the right thing and take care of everybody,” she said. “Because this is a United States and right now, I feel like we may be divided.”

To read the full letter and/or add your name to the list of signatories, visit https://bit.ly/2TRujJC.

We the people of United States should go over to Washington and don, t let the politicians and President Trump get pay for doing nothing but acting like baby, people of America remember on Election Day, who ate our learders

The church did not mourn when my father was furloughed from his civilian company position. He ended up taking a janitorial position to support our family. I have no sympathy for overprivaled government employees with guaranteed jobs to return to when the furlough is over with a President Trump signed guarantee of full back pay.

Teach a man to fish..... So the old saying goes. By bringing illegal immigrants into the country and protecting them in sanctuary cities, we are not showing God’s love. We need to be in their country, helping them improve their lives and the lives of their countrymen. That’s why I’ve been to Haiti 6 times this decade. We see the results of our mission work!!

Please pray that God would soften Speaker Pelosi’s heart and that she would support building the wall to protect US lives. Too many US lives have been lost because because of her heart being hardened just like Pharaohs. She used to support the wall but because Trump is in office, all she can say is “resist”.