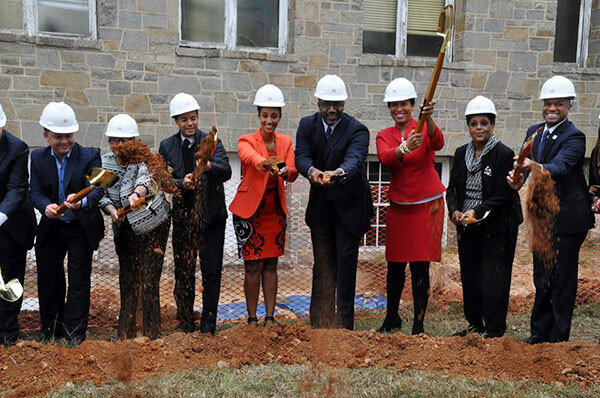 On Oct. 7, Emory Fellowship in Washington, D.C., broke ground on being a new kind of church. 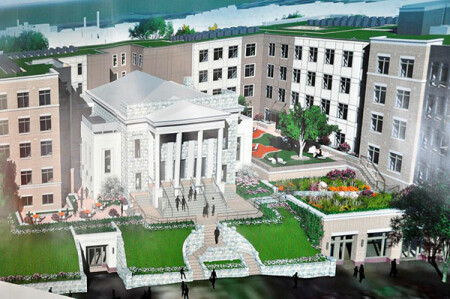 Founded on a vision that began in the soul of the Rev. Joseph Daniels as he stood in line at Tony’s Martinizing, across the street at the church, the new $56 million Beacon Center has been on the drawing board and finding the right partners and financing for eight years.

» View a virtual preview of the project

At a groundbreaking ceremony for the new facility, which will nestle the renovated church in the middle of an affordable housing complex, D.C. Mayor Muriel Bowser, and other political, community and church leaders “turned some dirt,” on this new reality.

“Patience, persistence and prayer” were the key phrases Broadnax and others used to describe the journey toward making the Beacon Center a reality. “We want to continue to be a beacon on this hill, to the community,” she said. “This is a God-sized dream. Today is a beginning.”

The mayor joined in the celebration of the Beacon Center project, in part, because it was the one that took . Housing Production Trust Fund over its $100 million for this year. Bowser has pledged to invest more than $100 million each year to produce and preserve affordable housing in a city that is experiencing substantial gentrification. 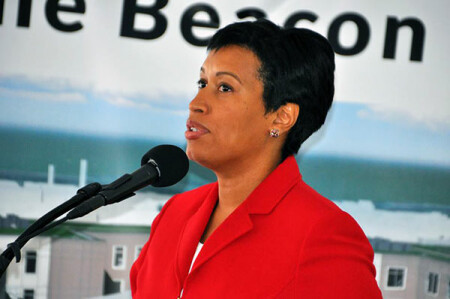 Bowser worked with Emory on this project before she was mayor, serving as the councilwoman for Ward 4. After becoming mayor, she said, “we set out to ensure that all residents – no matter their background, income or ZIP code – could afford to live in the District.” This unprecedented amount of investment done in such a timely manner is ensuring that “real money is getting out the door that will allow over 2,600 residents to call the District home.”

Affordable housing is essential for people like teachers and firefighters, whose salaries do not allow always them to afford homes in the areas they work, Daniels said. Affordable housing is available to those who income level is 60 percent or less of the average median income in D.C. The project will also provide eight housing units for people moving from homelessness. Along with a home, will come “wrap-around services,” that help residents move to health and wholeness.

For Daniels and the Emory congregation, has always been outside of the sanctuary, serving the community. Salvation, he told the more than 200 people gathered for the groundbreaking, has its roots in the Greek word, “,” which means to be healed, delivered, rescued, to be made whole.

The church, Daniels said, is called to provide spiritual wholeness, but also physical, mental, relational, financial and every other type of wholeness. “To be anything less would not be true or faithful to what Christ died and rose for us to be,” he said.

Throughout the ceremony, Daniels gave praise, honor glory to God. “Look what God has done!” he proclaimed.

But in order to accomplish such big ministry and navigate the incredibly complex maze of financing and development, the church had to work in partnership with the government, public and private sectors of the community, Daniels said. With such partnerships, all working for the common good, “anything is possible.”

Emory’s primary partner in this endeavor has been Community Builders, a national nonprofit real estate developer. Its representative for the Beacon Center project is Jacqueline Alexander, director of development for the Mid-Atlantic region.

Alexander likened the relationship between Emory Fellowship and Community Builders to a marriage. Both partners are in this for many years, are willing to put down deep roots into the neighborhood, and are committed to a shared purpose of “building and sustaining strong communities for people of all incomes to achieve their full potential.”

Emory developed a multitude of partnerships to create the Beacon Center. At the ground-breaking, Broadnax and Daniels offered thanks to nine private and public groups for their funding of the project and 10 organizations for their work as partners.

One of these partners is the United Methodist Development Fund, which provided a $3.2 million loan for the renovation of the church. While the historic front of the church and narthex will be preserved, extensive renovations are planned, included expanding the sanctuary so that it seats 500 worshippers.

The housing, commercial and office space will wrap around the church building, which will stand as the heart of the Beacon Center.

For Emory Fellowship’s associate pastor, the Rev. Carey James, having the church at the heart of things is how it should be. Currently, the church reaches out to about 100 homeless children in a nearby school. James said he envisions the Beacon Center perhaps providing housing for some of those children. 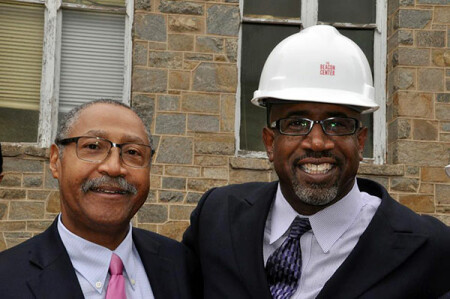 The church also has people from about 30 nations, James said. Many of these people like to share the food from their homelands, which has created a culture of cooking and hospitality at the church. The Beacon Center will build upon this, providing a culinary training center for people interested in learning to cook for restaurants. The culinary program will be operated by DC Union and DC Central Kitchens.

The Rev. Gerry Green, superintendent of the Greater Washington District, applauded the ministry of the Emory Fellowship members, who are doing church in “bold, new ways that honor God. They do not set themselves apart from the community,” he said. “As a church, they’re seeking to meet all the needs of the community, their spiritual needs, but also, for food, clothing, shelter, health, education, social needs, jobs. “That’s what the church should be. They are a light for the community.”