It takes 21 merit badges to become an Eagle Scout, and you must do this before you reach the age of 18. According to a blog for adult leaders in Scouting, only 6 percent of eligible Boy Scouts earned the distinguished rank in 2014. Since its beginning, only 2 percent of scouts ever achieve this honor.

In addition to the merit badges, to become an Eagle Scout, a young man must also complete a service project. For Alex Conway, who is working on his Eagle Scout rank and who attends Locust UMC in Columbia, it was only natural to turn to the church to offer his services.

And that’s when the work really began. 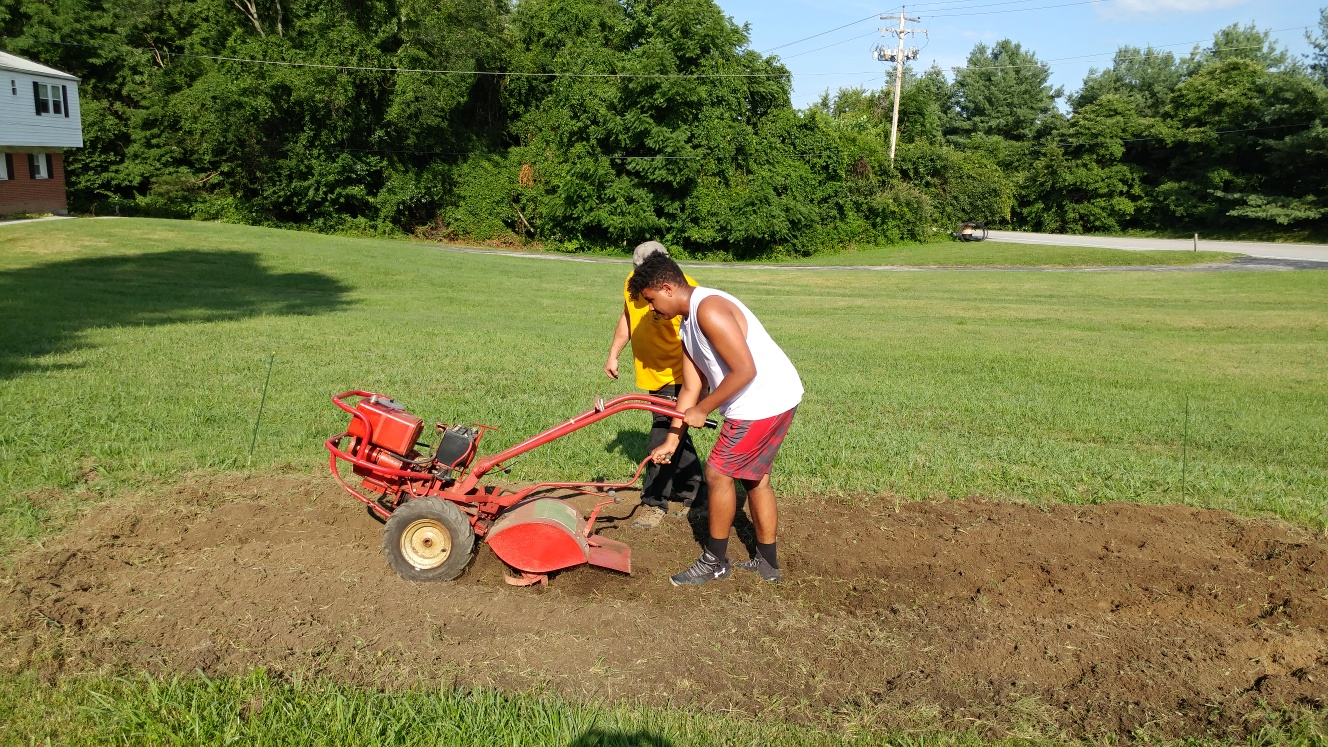 Alex "AJ" Conway runs a rototiller in an area that will be transformed Memorial Garden at Locust UMC in Columbia.
Photo courtesy of Andrea Conway.

He reached out to the pastor of Locust, the Rev. Jane Wood, to see if he could do his Eagle project for the church. Wood said yes and suggested that the church would like a Rain Garden on the west side of the property, surrounding a large tree stump where an old elm stood until just a few years ago.

Conway set to work and, as often happens, plans changed. Locust – which just celebrated its 150th year as a congregation – is in the early stages of a building project. The historic Black church wants to expand, said Wood, because it has outgrown its sanctuary, needs office and education space, and perhaps more.

That expansion is limited, however, because the church is bordered by a cemetery to the north. Martin Road runs just a few feet from the south entrance of the church, so that leaves east and west as the only available directions.

In the process of planning that building project, when the church started looking at expanding to the east, a surveyor came across something unexpected: human remains buried just beyond where the gravel parking lot ends. Three people are buried beyond what is considered the bounds of the cemetery. 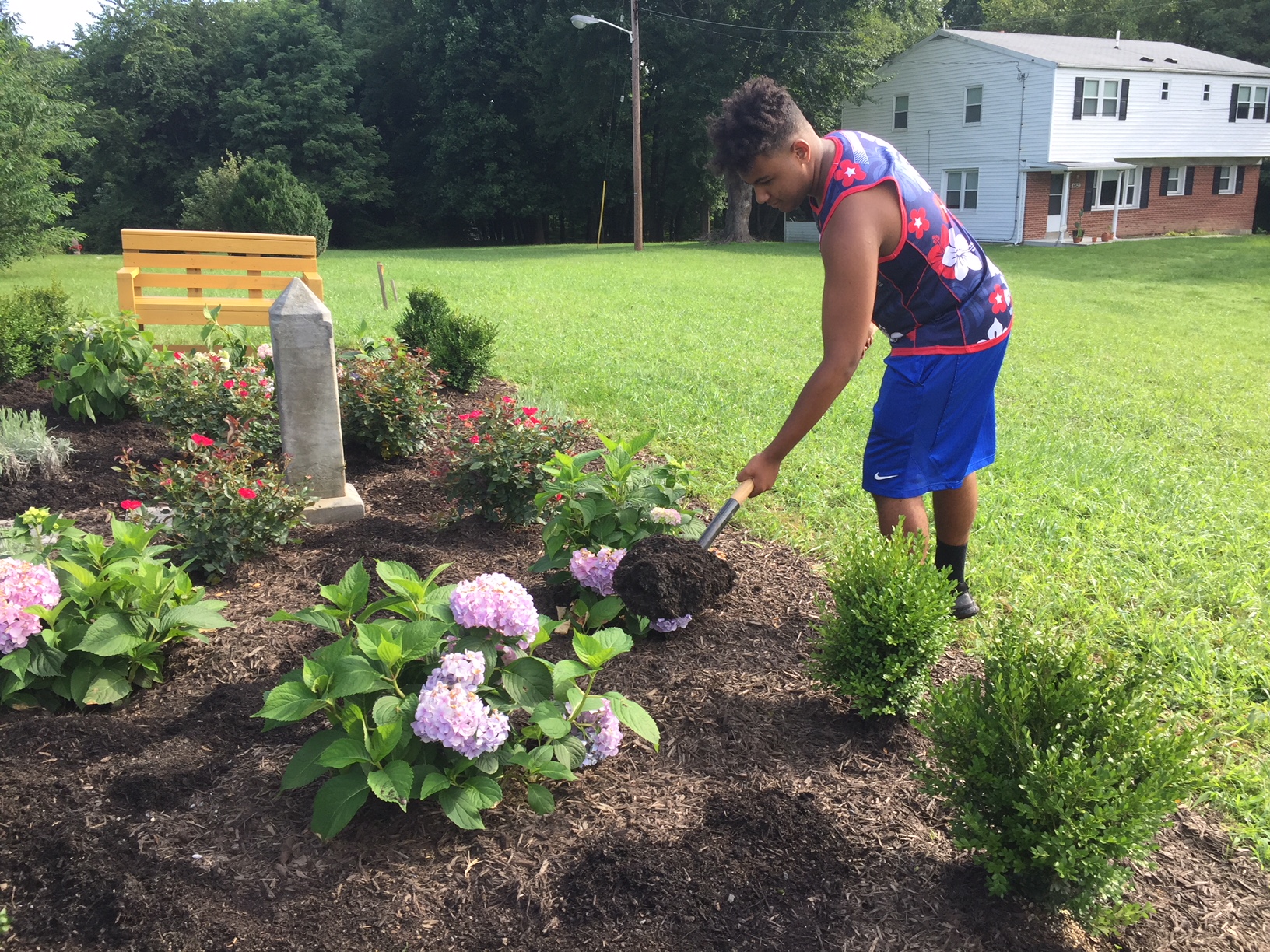 Alex "AJ" Conway puts some finishing touches on the Memorial Garden he designed and built as part of his Eagle Scout project.
Photo by Erik Alsgaard.

And so the Rain Garden that Conway was planning became a Memorial Garden.

On July 21, Conway and 10 members from Troop 1997 created not one, but two gardens. The Memorial Garden, which sits just off the edge of the parking lot, is complete with a stone marker and bench, beautiful flower and a small path. The Rain Garden, on the west side, surround the tree stump with beautiful flowers, attracting butterflies.

He started with a safety briefing and then explained what was going to be done. They cleared, dug and planted two gardens in a span of five hours. Just as they finished, it began pouring rain.

“At first, my project was supposed to be about just a small garden on the other side of the parking lot,” Conway said on a recent (dry) Sunday morning. “But once I was informed by Pastor Wood that we needed a Memorial Garden, I was like, ‘Why not do it right here?’”

Conway also placed a headstone in the garden. It’s from Boyd Fowler, he said, who died in the 1800s.

“There were originally supposed to be three of (the headstones),” Conway said. “But I only have found one so far, so I decided to put the one in there.”

“Words cannot describe how elated and proud we are of AJ,” said Wood, the church’s pastor. “The beauty of both looks as if we hired a professional to design and implement the gardens. We are so blessed to have the creative skills and dedication of AJ. Additionally, not only does Locust get to enjoy, but the Community as well. To God be the Glory!”

People in the church, Conway said, have already commented to him about how nice the garden looks. At a recent Bible study, he said, people were saying that they couldn’t have done it any better.

“Thanks to Pastor Wood and the people at Locust for giving me the opportunity to build these gardens for all to enjoy,” he said.