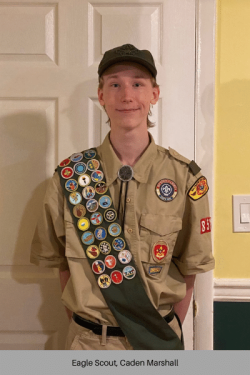 Caden Marshall, the son of Amy and Arvak Marshall, recently received his Eagle Rank in Boy Scouting. His project, “Eagles Rest,” is being nominated for District and National Eagle Project of the Year. Once you see it, you’ll understand why.

And you can see it – and use it – the next time you visit West River Retreat and Camping Center, part of the BWC’s retreat and camping ministry program.

Caden Marshall describes his project as an octagonal pergola, “basically the framework of a gazebo without a roof,” with a 500 square foot paver patio, six custom porch swings, a brick fire pit, a 90-inch custom concrete countertop, and solar-powered string lights wrapped around the frame.

If that sounds impressive, it’s because it is.

“I am so proud of Caden,” said his mom, Amy.  “Not only does he show a strong work ethic in the kitchen at camp but then to choose to build such an amazing project to benefit West River. This whole process really shows me that he has grown into an amazing young man that understands and shares a passion for camping and created a special place that can bring people together.”

Chris Schlieckert, director of Camping and Retreat Ministries for the BWC, said that Eagle’s Rest is one of the most impressive Eagle Scout projects he has seen.

“The thoughtfulness of the design and quality of the work on the project guarantee it will be a favorite gathering place for campers and retreat guests alike for decades to come,” he said in an e-mail. “I often say the conversations that happen around the campfire at camp are ones that just don’t happen anywhere else.  Those conversations change lives, and I can’t wait to join in conversations around the fire at Eagle’s Rest.”

The project was so big, Caden Marshall said, that he had to obtain permits and inspections to get the project done. It took two years, from start to finish.

“I also had to reduce the size of the original project by 15 percent,” he said, “because, without that reduction, it would cost around $2,000 more.” Marshall contacted a few commercial landscaping and construction businesses for the estimated price of the project if done commercially, and the prices they gave ranged from $15,000-$20,000. 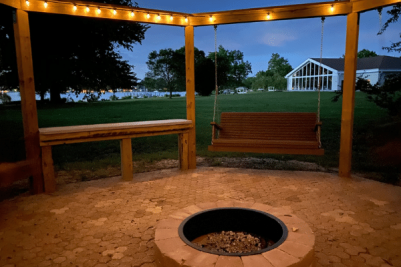 Achieving the highest rank in scouting means a lot to Marshall.

“I couldn’t have gotten to where I am if I didn’t have help along the way,” he said. “To be able to stand with other Eagle Scouts is an amazing accomplishment to behold. I am very excited for my Eagle ceremony where I can thank all of those who helped me, and I can finally be able to see everything I’ve done in scouting that I have worked so hard for come together.”

Amy Marshall, who serves as the Camping Coordinator for BWC Camping, said that they are hoping to celebrate Caden at an Eagle Ceremony in the spring when things are healthier and outdoor meetings are more pleasant due to the weather. Caden Marshall has also worked in the kitchen at West River, in addition to building the Eagle project.

Marshall said that he plans on staying in scouting until he “ages out” this month. He is currently the Senior Patrol Leader of his troop.

“What I’m planning to do before I leave is set up a system of leadership that can be used by the age group below mine, since the young leaders mostly consist of my age group who will be aging out in the next year,” he said. “I am also creating a cookbook for the troop so planning campouts will be easier in the future.”

Another project he is working on for the troop is the Virtue Program. “In the scout law,” he said, “there are words that some scouts can’t define even though they say them every meeting. I plan to review the words of the scout law and create a binder for future SPLs to use.”

Marshall started in scouting when he was in elementary school, as a Tiger Cub, and worked through as many belt loops as he could in Cub Scouts. When he became a Webelo, the shoulder pins became available and he earned them all. He also earned the “heavy shoulders” award.

“I bridged over to Boy Scouts with about five other scouts in my den, but around 10 Cubs bridged over to Troop 853 with me in 2014,” he said. “I became a Patrol Leader in 2016 and started working toward my Eagle rank after earning the Life rank in 2018.”

West River is one of my favorite places and, as an Eagle Scout from the 1970's, it is wonderful to see this very thoughtful project. I will enjoy it with gratitude for Caden's effort when I'm next on retreat.

Caden, your efforts and accomplishment in building Eagle's Rest is something that we all can thank God for. You are a true example of an Eagle Scout who "Does his duty to God and his country". I'm sure your future is bright in service to Christ Jesus and your community. God has given you many gifts and we are thankful that you have shared them with us at West River.