For the first time in decades, within the Baltimore-Washington Conference is being organized in a new way. Thanks to a vote at the 2018 Annual Conference Session, gifted and called people are being recognized and invited to serve in ministry areas of their choosing.

The difference, BWC leadership said, will be striking.

More than 60 people gathered Sept. 8 at the BWC Mission Center to start this “something new” with the agency .

The old model of doing ministry wasn’t working, said Christie Latona, director of Connectional Ministries for the BWC. In her report to the Annual Conference Session, she noted that as of July 2017, only two of the 17 ministry committees at that time were “fully functional (making progress toward fulfilling their purpose), half only met to write the report for Annual Conference, and the remainder were meeting but not fully functional (e.g., meeting but little action/impact, not full participation, etc.).”

Some major committees hadn’t been functional in years, Latona noted. “This was due to several factors which are most easily addressed within a context of a simplified, purpose-driven structure,” she said.

That idea took shape as a new tentative structure began Sept. 8, where five “tables” were formed, leaders elected, and new paths of ministry charted. The five tables Leadership Development, New Faith Expressions, Young People’s Ministry, Abundant Health, and Advocacy and Action. This new structure will be tested between now and next year’s Annual Conference Session, where final recommendations will be put to a vote.

The Discipleship Agency concept is one designed to better connect the BWC’s mission, work, and said Latona. 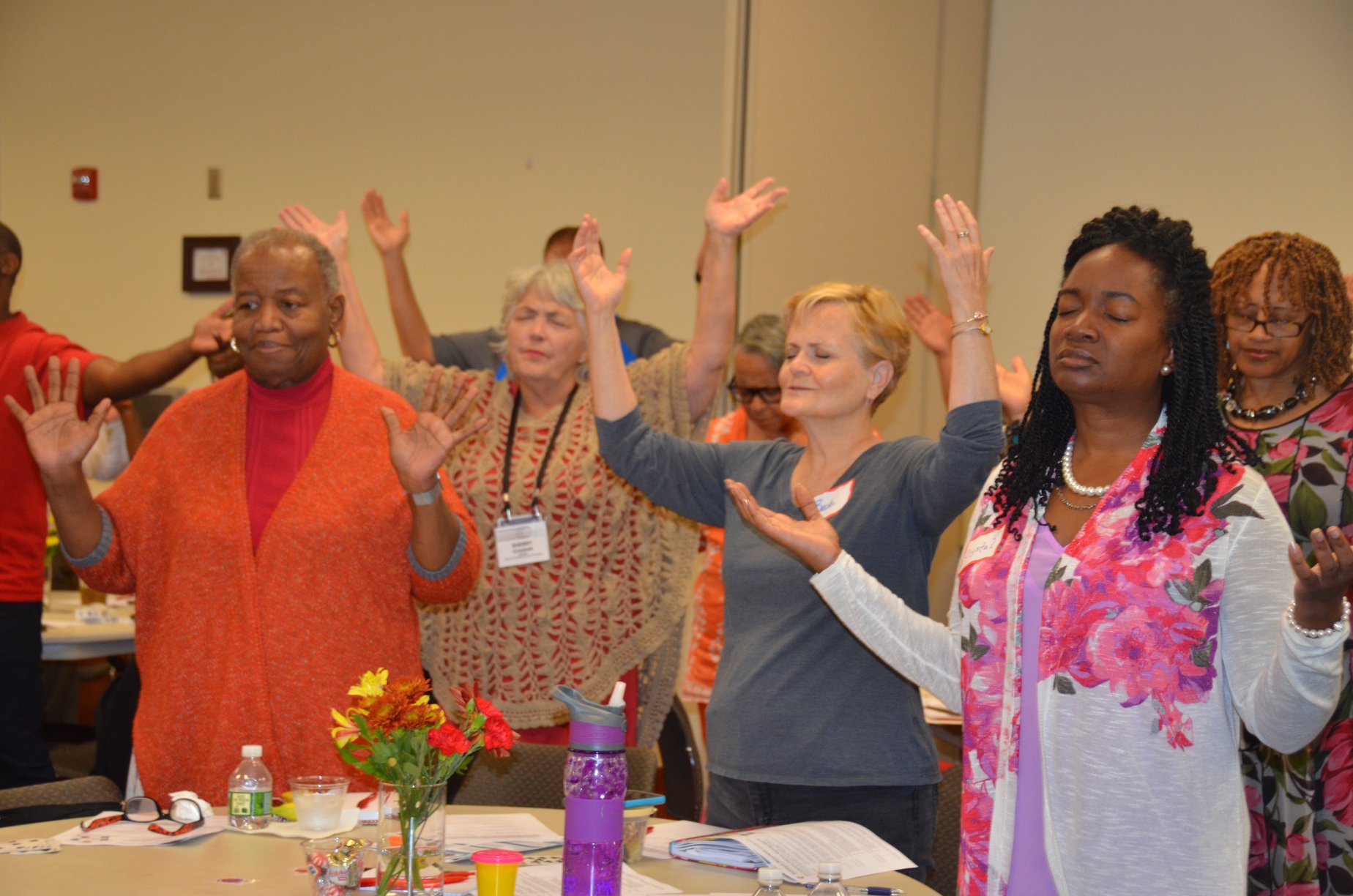 Ministry leaders in the Baltimore-Washington Conference join together in prayer
during their Sept. 8 meeting at the Mission Center. Photo by Melissa Lauber.

“Another part of the newness is, what if we are actually investing in the leadership development of our leaders,” Latona said, “and getting our leaders of all the discipleship agencies all on the same so that as they do their individual work, we’re ” Latona said that seasoned leaders and new leaders alike are leaning into this new work and wind of the Spirit.

One of the stumbling blocks of doing ministry is that people tend to want to go to their own “silos,” she continued. This new structure is designed to help people tie back the whole group.

“This is a way of connecting people in both the culture that we’re seeking to create, the framework we’re seeking to live into and explore, and hopefully it will help us gain momentum,” Latona said. 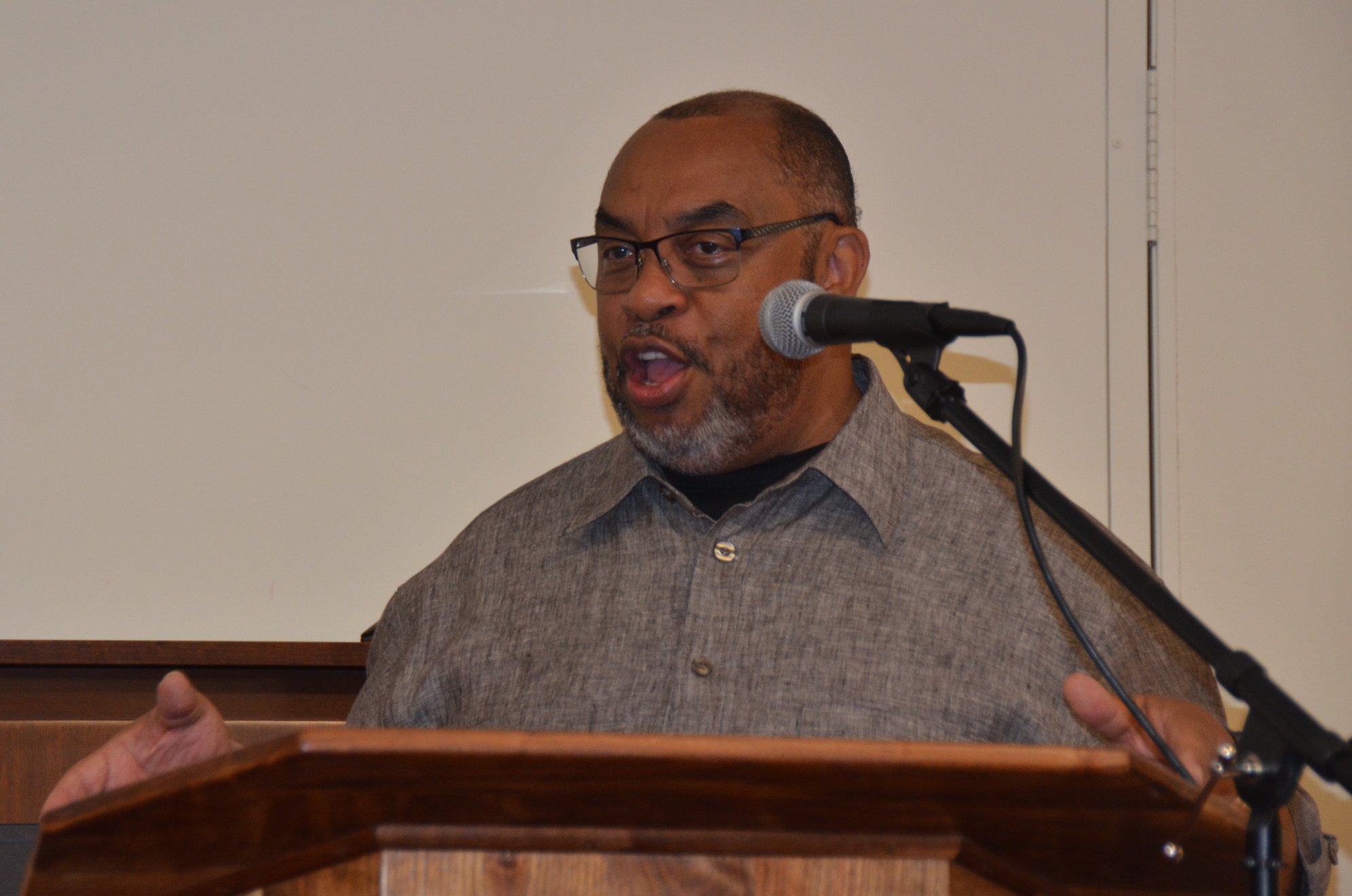 “Every person in this room is God’s gift for something that’s new and unique and powerful and wonderful and undiscovered, that we’re going to put our hands around,” said the Rev. Rodney Smothers, Director of Leadership and Congregational Development for the BWC as he introduced the “why” of the new agency structure. “If you leave here today and you don’t have something new, something that challenges you, something that invites you to think differently, this (day) has been a complete waste of your time.”

This new culture, Latona said, is inspired from Ephesians 4 and is one of shifting from isolation to coordination. “It’s shifting from fits and starts into a sustained effort towards something that we understand is ours to do together. I think that that’s a huge shift a lot of people aren’t aware is actually needed.”

Ephesians 4, Latona said, the beginning, talks about disciples being on the same road, in the same direction, moving rhythmically and easily together. To do this, she added, requires deep spiritual leaders, permeated with one-ness and rooted in Christ.

Latona is very excited about this new start, confessing that she couldn’t sleep the night before the meeting.

“I’m excited that we have more young people around these tables,” she said. “There’s a very intentional diversity of perspectives and types of churches that are here.”

The new Discipleship agencies will meet quarterly, helping to organize the work of ministry for the conference.

Leaders elected at the meeting include:

People offering their gifts, time and talents to the BWC’s Discipleship agencies or one of their task forces need to go online first and fill out an interest form: https://arenaweb.bwcumc.org/default.aspx?page=3660