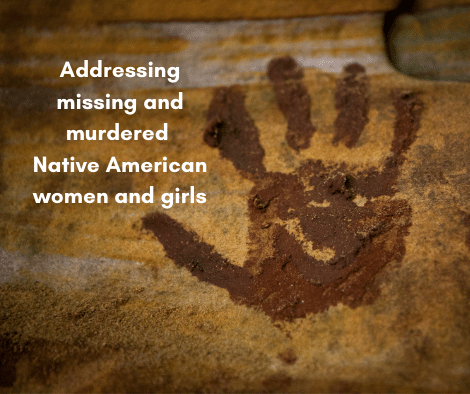 Bishop LaTrelle Easterling and the Baltimore- Washington Conference Committee on Native American Ministries are calling on United Methodists to support legislation that will solve the thousands of unsolved cased of missing and murdered Native American girls, to recognize this injustice, and take action to end it on May 5.

This Sunday April 18, United Methodist congregations are invited to celebrate the contributions of Native American Ministries.

We are invited to generously fund programs that transform the spiritual and congregational lives of First Nations communities through congregational and leadership development. These are vital ministries.

At the heart of our respect for Native American ministries is our public witness that names the violent legacy borne of hundreds of years of colonization, forced geographic relocation and policies that erode tribal sovereignty. We cannot ignore the escalating disappearances, cases of domestic violence, including rape and murder that are found at the intersection of human trafficking, amplifying the more than five-hundred years of transgenerational trauma aimed at Native women and girl’s bodies.

Every woman and girl’s life are sacred. Systemic misogyny is antithetical to the Gospel of Jesus Christ. The 2016 United Methodist Resolution “Eradicating Sexual and Gender-Based Violence” says, “violence takes different forms and, in many cases, it is about power and control. Violence is a tool used by the strong to dominate the weak and the powerful to dominate the vulnerable. Often the mere threat of violence is enough to achieve the goal of dominance and control. Human beings are especially vulnerable with respect to gender and sexuality, and therefore sexual and gender-based violence (SGBV) is particularly devastating.”

We must first confront harmful perceptions and confront racist policies that minimize violent acts and deny that systemic violence affects off-reservation American Indigenous women and girls. In 2019 only 116 of 5,712 of missing Native women and girls were logged into the Department of Justice’s nationwide database and in several Native communities. Women and girls have been murdered at a rate of ten times the national average.

We applaud “Savanna's Act’ as a first step to increase federal trust responsibility to assist tribal governments in safeguarding the lives of Indian women. We support Interior Secretary Debra Haaland who said on CNN, "Violence against Indigenous peoples is a crisis that has been underfunded for decades. Far too often, murders and missing persons cases in Indian country go unsolved and unaddressed, leaving families and communities devastated."

As the Chairperson of the Native American International Caucus, Ragghi Rain of the Eastern Cherokee Tribe has stated, “Missing, murdered Indigenous Women and Girls -- it is a human rights crisis as racism runs rapidly through our country and communities; Native People are not seen as fully equal, but the stereotypes that live within the minds of the majority of Americans.”

At the state and national level, we call on congregations to support legislation to expedite jurisdictional authorities to solve the thousands of outstanding cases that have not been tracked and we urge congregations to remove the shame endured by Native women and girls who speak out with courage to report abuse.

To honor the call for justice for missing and murdered Indigenous women and girls, on May 5 we urge congregations to recognize a National Day of Awareness for Missing and Murdered Native Women and Girls, and engage in public acts of education, solidarity and advocacy that empower the voice and aspirations of Native women and girls, at the local, regional, national, and international levels.

National Sexual Assault Telephone Hotline: 1-800-656- HOPE. Please call this line if you have experienced sexual assault and wish to speak to someone, no matter when the assault happened. The line is open 24/7.

For Native Communities by Native Communities -- StrongHearts Native Helpline: 1-844-7NATIVE. This helpline is a domestic violence helpline for American Indians and Alaska Natives that provides culturally appropriate support. The line is open from 7am – 10pm CST.

“What to do when you are raped,” Native American Women’s Health Education and Resource Center

Native People and The United Methodist Church / 2016 Book of Resolutions, #3321