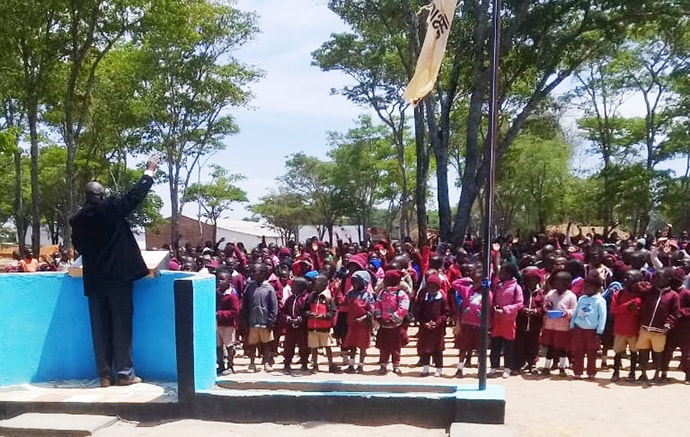 Hanwa Mission School in Hanwa, Zimbabwe, is now a registered United Methodist school. The designation
means students can now take exams at the primary and secondary school
rather than being forced to travel long distances. Photo by Chenayi Kumuterera, UMNS.

Hanwa Mission School, a project of the Community UMC of Crofton, is now officially a United Methodist school.

In March, the Murewa Rural District Council transferred the primary and secondary school to the Zimbabwe United Methodist Church for further expansion to benefit the local community.

As a registered United Methodist school, Hanwa can offer exams to the students who previously had to travel long distances for testing.

The designation also means that Hanwa can be developed into a boarding school. Plans are for that work to begin in 2020, said the Rev. Solomon Mawoyo, Zimbabwe West education secretary. “But with the economy, we surrender all to Christ,” he said.

The campus covers about 100 acres and includes a large dam for irrigation. The three primary and two secondary classroom blocks were constructed through a partnership with the Baltimore-Washington Conference Zimbabwe Volunteers in Mission.

“The official handing over of the school by the council to The United Methodist Church is an important historical activity,” said the Rev. Future Sibanda, station chair for the mission school. “This will see the church being fully responsible of its property and everything being fully registered in the name of the church.”

The district council established and registered the Hanwa Mission School in 2000 during the land-reform program. Newly resettled villagers and the district council said a school was needed because of increased population and the long distances children would travel to existing schools.

In 2005, when the community, school leaders and the district council realized they could not sustain school operations and development, the Zimbabwe West Conference was invited to take over those responsibilities. However, the official registration and handover was delayed for many years due to missing paperwork.

“I have five primary schools and one secondary satellite school in my ward,” said Brighton Nyambo, Ward 23 council representative. “I am glad that the school is going to be registered.”

Before, Nyambo said, during exam periods, children had to walk more than six miles to Macheke and Nyazira to take their tests. “It is not unusual for young women who lack bus fare to be sexually harassed by the bus drivers,” he said.

The students also would often ride in open trucks because it is the cheapest mode of transportation.

“This movement,” Nyambo said, “is not good for the children. Some end up dropping out of school because there is nothing that motivates them.

“We are expecting excellent results (with the exam change), because the students will be familiar with their school setup,” he said.

Charlie Moore, a member of the Crofton church and a team leader of the Zimbabwe Volunteers in Mission, congratulated Murewa District superintendent Henry Chareka, Sibanda and other leaders “for achieving this great milestone.”

He said the decade-long partnership with the mission and Zimbabwe Episcopal Area has changed many lives over the years.

In February, the collaboration led to the opening of a state-of-the-art early childhood development center and playground at Hanwa Mission School.

“While we are still defining our next steps,” he added, “I can assure everyone that we are continuing to dream and are fully committed to nurturing this strategic partnership well into the future. Our reward is seeing so many students who are studying hard, applying themselves and developing into future leaders of Hanwa and all of Zimbabwe.”

Chareka thanked Sibanda, the pastor in charge, “who left no stone unturned, to register the school.”

Hilda Chikata, a parent and farmer, said the handover creates new opportunities for students and the community.

“I am pleased that … we are going to have a better school. I and other parents in the community will supply the school with vegetables and earn a living,” she said.

Student Tinotenda Kadiramwando, 10, said he is looking forward to being able to take exams at his own school.

“We are so happy that the council is going to hand over this school to the church.”

“We are going to operate without any interference,” said Mawoyo. “Registration is going to start, and in two to three weeks, we are going to have a registration certificate, engage competent staff and a substantive head and deputy to run the school.”

Kumuterera is a communicator with the Zimbabwe West Conference. This story courtesy of United Methodist News Service.

Is there a means to which we can send monetary donations to this cause?

Mark - thanks so much for your interest. Please give me a call (410-703-3557) or drop me an email (cmoore@telatlantic.net) and we can discuss how you can support us. Thanks - Charlie