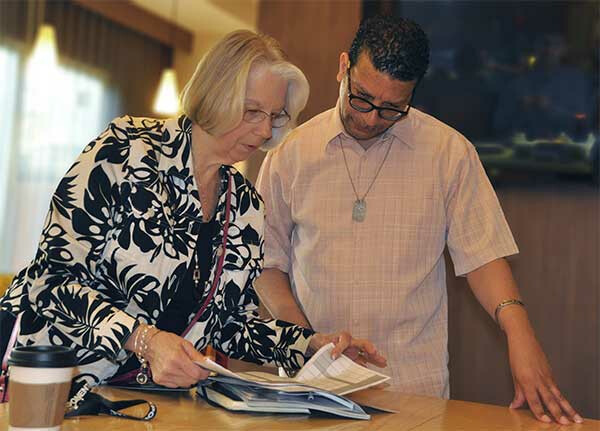 Jo left, and the Rev. Tony Love, both from the BWC’s Office of Vibrant Communities, prepare for a day at Exponential 2016, a church planters conference in Orlando, Fla.

More than 30 clergy and lay members from the Baltimore-Washington Conference attended Exponential 2016, an ecumenical conference for church planters in Orlando, Fla.

The Rev. Cary James, at Emory UMC in Washington, D.C., has attended 10 of these meetings.

“The biggest thing I learn is the network,” he said. “I come and meet new people and learn new things and continue to network with them beyond the conference.”

James said he also benefits from learning about cutting-edge techniques for reaching new people with the message of Jesus Christ, especially in the areas of leadership development and evangelism. Some of the techniques aren’t really all that new; they go back, he said, to the days of John Wesley where he took the church outside its four walls.

For James, Exponential helped him learn the mindset of not just growing a church, but multiplying it.

“This helps me to not be complacent in my own ministry; not just settling for addition – adding one person at a time – but to think as the early church did in the Book of Acts, about multiplication, where we’re igniting a movement.”

James envisions a time when his church is multiple churches with multiple buildings and ministries. He said helping other people thrive is the key to this effort.

James was delighted that the BWC had such a large attendance at Exponential. When he first started coming 10 years ago, he said, there were maybe one or two others in attendance from the BWC.

“To see so many here is a great thing,” he said. “I think we’ll go back to the Baltimore-Washington Conference and really ignite a movement there because we have a critical mass to do it.”

The Exponential Conference had an immediate impact on the Rev. Johnsie Cogman, pastor of Mt. Zion UMC in Georgetown. Her main learning: multiplication instead of addition.

“If each person in the church would multiply him or herself and encourage others to do the same… God’s kingdom would grow exponentially,” Cogman said. “We would multiply not in our building but in our communities. Our multiplication focus will be on making disciples not just members.”

Cogman said that she had three leaders from her church with her in Orlando. She brainstormed with them during the meeting as to how to multiply Mt. Zion.

“For example, I challenged each leader to start a small group of some sort, in which relationship building and disciple-making occurred,” she said. “We are going to implement these groups using technology and social media, beginning in May 2016.”

The BWC’s office of Vibrant Communities provided scholarships for many BWC people to attend. It was an intentional effort, said the Rev. Tony Love, director, to expose as many people as possible to the need for starting new churches.

“We know that one of the best ways to reach new people for Jesus Christ is to start new faith communities,” Love said. “In order to do that, we have to bring up leaders, both clergy and laity, willing to make the sacrifices to start a new church.”

In the past four years, the Baltimore-Washington Conference has started 14 new faith communities. The most recent, a multicultural worshiping community by at Columbia Heights, began last Easter.

As a denomination, The United Methodist Church has declared that starting new churches is one of its “Four Areas of Focus.” Path 1, part of Discipleship Ministries, was created to offer a variety of tools and resources. Path 1 was one of the partners with and at Exponential.

Path 1’s stated objective is to equip 2,016 church planters who will start 1,000 new congregations. Each of those congregations will commit to starting another new congregation within its first 10 years of existence, thus becoming a level 5, or multiplying, church.

The Rev. Gail Button serves Messiah and Solley UMCs in Glen Burnie. After attending Exponential for the first time, she asked her congregation to pray about three things she learned there.

“First, are we working towards building our kingdom or God’s Kingdom,” she said. “Are we growing or sending? Are we relaxing or taking risks?”

Both of her churches are small-membership churches, she said, but that doesn’t mean they can’t be Level 5 churches; churches that multiply. Solley UMC has thousands of townhouses being built nearby, but there is no place for small groups to meet, like a Panera.

“We’re thinking of creating a coffee shop,” Button said, “a sort of ‘third place’ for people to meet.”

Button attended a workshop on this type of , noting that starting a coffee shop costs about 30 percent of a traditional church start.
“We’ll see what the Spirit does here,” she said.

“The one thing I carry away from Exponential is that if you’re going to evoke that change, the way to do that is in small, strategic groups,” he said.

Smothers said the conference helped him think about how to do that with a group of leaders at his own church, including a group of and young people in the mix.

Noting that many of the attendees at Exponential were young adults, Smothers said that many new faith communities are born out of the failure of the traditional church to meet people’s needs.

“What we have to do is really create a church within a church,” he said, “and be intentional about it.”

That intentionality requires tools, he said, such as the information and resources being provided at Exponential.

Changing the narrative from additional to multiplication, he said, is a game-changer in thinking about evangelism. “You move from adding one plus one plus one,” he said, “to a place where we go out and invite others.”