Holy conferencing, church politics, worshipful moments and soul-stirring testimonies merged at The Hotel in College Park Oct. 31-Nov. 4 as the Baltimore-Washington Conference opened its doors to the 152 delegates and six youth delegates of the Northeastern Jurisdiction.

“After six plus years of planning, with its starts and stops, push forward and then pauses, it was great to accomplish the 2022 NEJ Conference,” said the Rev. Tony Love, who led the Jurisdiction’s planning committee. “The NEJ session provides the larger church with entry points for celebration and courageous, holy conversation about what we value. Being ‘one in ministry to all the world’ is a value and I remain hopeful that our actions will continue to reflect such.”

One of the highlights of the session was the assignment of bishops to the 10 annual conferences, which span 13 states and the District of Columbia. Bishop LaTrelle Easterling was re-assigned to the Baltimore-Washington and Peninsula-Delaware Conferences for the next 18 months. “I am happy, I am humbled, and I am hallelujah-proud to be the servant leader” of these two conferences,” the bishop said. 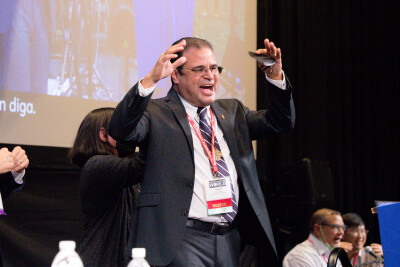 Another highlight of the Conference was the episcopal election of Hector Burgos, from the Greater New Jersey Annual Conference, who became the first Latino bishop to serve in the Northeast Jurisdiction.

When Burgos was an infant, and his mother was fearful that he might not live, she told him, “Hector, abre tus ojos – open your eyes,” he told the delegates in interviews on Nov. 1. That refrain from his mother continued throughout his life.

Taking the stage after being elected, Burgos echoed his mother’s plea: “Abre tus ojos … look for the blessings and opportunities God has for us,” now Bishop Burgos told the church. “Friends, the world needs us … all of us. … Let’s go and reform the world, in Christ’s name.”

While the delegates originally chose to elect two bishops at this session, there was a seeming deadlock between two of front-runners – the Rev. Jay Williams of the New England Annual Conference, and the Rev. Alyce Weaver Dunn of Western Pennsylvania. Following the 17th ballot, late on the final night of the session, the delegates voted to postpone another episcopal election to the NEJ’s 2024 Session. Arroyo acknowledged the intensely personal, emotional and spiritual dimensions of being lifted up and considered as a candidate for the episcopacy, as he sought to help United Methodists “… write the narrative of a church that embraces our multiple identities and gifts. … Let us be the church together,” he said, “without fear of leaning in toward the hard work of being beloved community.”

On the sixth ballot, the Rev. Tony Love, who serves as assistant to Bishop LaTrelle Easterling, became a write-in candidate and garnered many votes over seven ballots. “Just to have my name raised by my colleagues and faith friends was truly a gift to me. Humbled, honored, affirmed and unworthy … that described the moment well,” he said following the session.

One of the ministries that unite the members of the NEJ is the Call to Action. In 2016, the Revs. Joseph Daniels, of Emory UMC in Washington, D.C., and Lillian Smith, of Cheverly UMC in Upper Marlboro, issued a Call to Action to end systemic racism. Annual Conferences, through their Directors of Connectional Ministries (DCMs), were tasked with ensuring several goals that addressed white supremacy and the building of beloved community were pursued.

On Nov. 3, the DCMs reported on their progress during the past six years, which included the death of George Floyd and other African Americans at the hands of police and a number of other events that further galvanized the church’s efforts to address racism.

Christie Latona, the director of Connectional Ministries for the BWC, reported that the Call to Action encourages United Methodists to embrace justice as a spiritual discipline and to take bold and brave steps to eradicate systemic racism and end white supremacy.

Within the BWC, she said, more than 80 percent of local churches are on a pathway toward racial justice and more than 40 percent are taking action to build beloved community. (Learn more about the BWC’s ministries to Building Beloved Community.)

Following the report, an impromptu sharing of the pain caused by racism in our church and culture poured forth as delegates went to the microphone to share their stories and their insights on addressing whiteness. 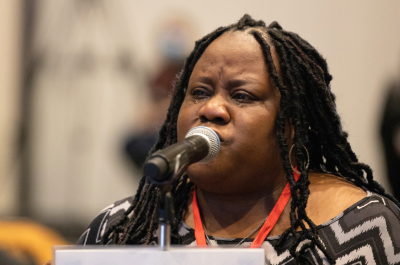 From the BWC delegation, several delegates shared their witness, including Sharon Milton of Emory Fellowship UMC in Washington D.C. “Thank you for allowing us to share our hearts,” said Milton, who shared insights into how her heart is broken as she works with black youth at her church, who have lost their friends to gun violence, and the church’s inability or unwillingness to change our culture. “Faith without works, is dead,” Milton said. “It’s good that we hear about this. But it is time we put our faith into action.”

Following the conversation, Arroyo went to the microphone. “I know the importance of sacred space to hear the pain and trauma,” he said. “I think its harmful to open the space and not continue to the journey.” He invited the NEJ College of Bishops and Vison Table to partner with the General Commission on Religion and Race “… so that when we gather in 2024, knowing our stories, we can address the systemic and institutional barriers of racism together,” Arroyo said. “I invite you to walk with me.” The delegates voted to accept this invitation.

The impact of members of the Baltimore-Washington Conference was felt throughout the session. Among them:

The next session of the Jurisdictional Conference is scheduled to be held in July 2024 in the Western Pennsylvania Conference.

See the daily copies of the NEJ’s Daily Christian Advocate
See the Call to Action Report
See photos from the session at flickr.com/nejumc.