She didn’t know it was brave. She was just following her heart. But in February, Tracey Beall, a young interior decorator from Baltimore, went to a canyon in Tijuana, Mexico, to live for 10 days in a tent city for immigrants to see how she might make a difference.

Describing what she experienced there is difficult, she said. 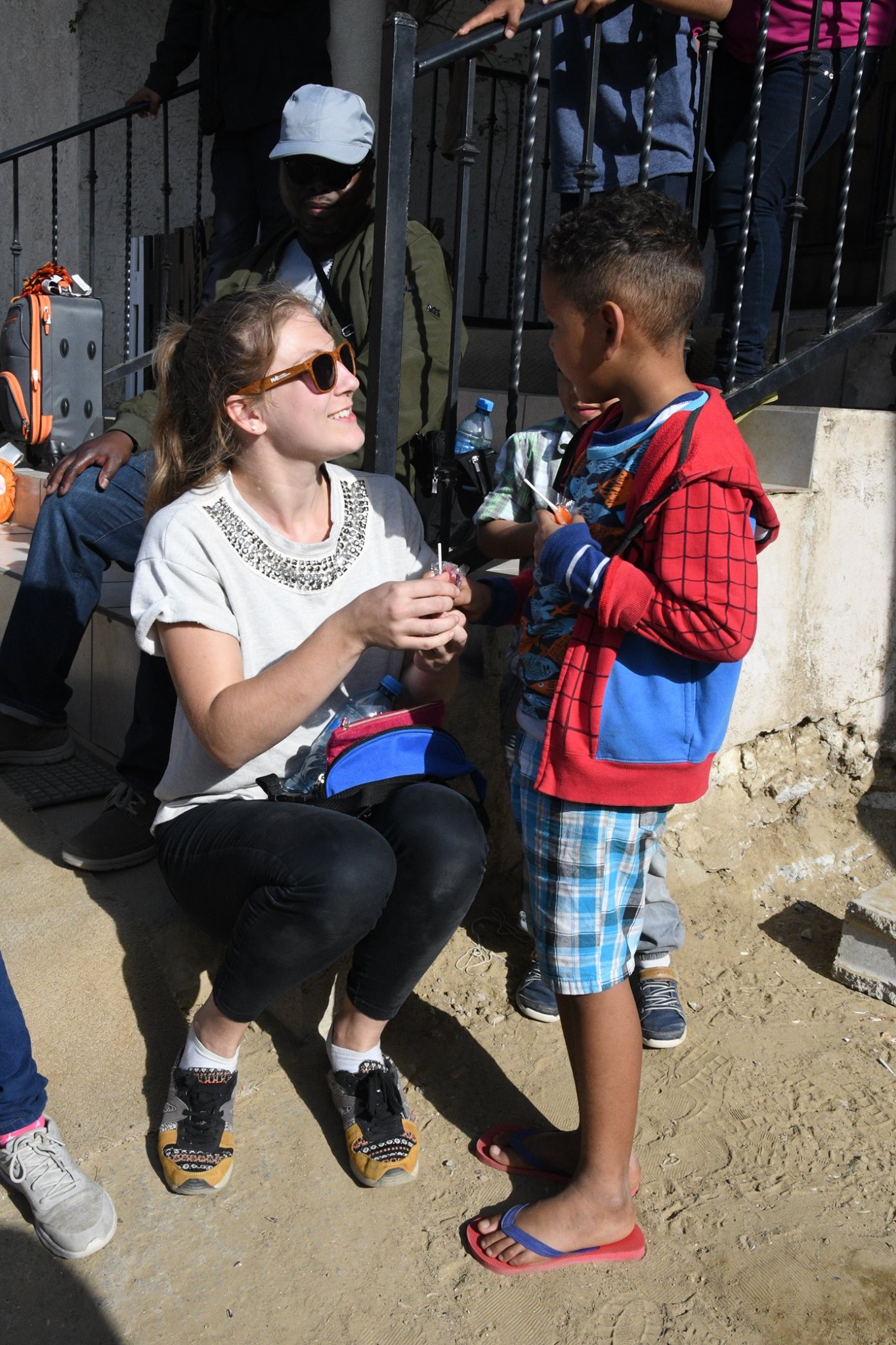 Beall said she felt compelled to go because of a previous trip to the same location – Embajadores de Jesus – a church that houses migrants awaiting hearings as they attempt to settle in the United States.

That trip was in October 2019, when a team from the Baltimore- Washington Conference went on a three-day border immersion experience. It was a sunny afternoon when their van drove deep into a valley where the rocky roads are so dusty that large rainstorms strand residents in their homes for days. When the road became unpassable, they walked, to the Ambassadors of Jesus Church, where more than 300 immigrants live in tents inside the church building.

Sitting on the church steps, the children immediately surrounded Beall, who took a few small games out of her backpack. In that moment, something in her soul shifted. She barely heard the official presentation that followed; being present with the children moved her. “I said, ‘I want to come back,’” she remembers.

And so she did.

On her solo return trip, Beall learned that “when a family arrives at Embajadores de Jesus, they are given an area to sleep — either available single beds pushed together or a tent set up inside the church to give a little more privacy. I saw their bathrooms that don’t have flushing toilets. I saw their ‘showers’ where you fill up a bucket of room-temperature water and go into a room with a drain to sponge bathe yourself. Trust me; it’s awful.”

Beall also saw the lines of people waiting to receive their dinner, which all depended on what food the facility had at that moment.

“I learned that people either have jobs within the church — cooking, cleaning, managing supplies — or they are assisted in finding jobs in the surrounding area of Tijuana upon arrival. Everyone is self-sufficient, has their own supplies, takes care of their family, and helps others as needed,” she said.

The migrants run the shelter, cooking about 900 meals each day, cleaning, and keeping things operational.

The almost 100 children who live there run around inside, playing games that they’ve made up in their heads, Beall said.

“When I took the books that I brought out of my bag, there was never an instance where a book wasn’t being read or looked at by a child,” Beall said. “Some books were in English, some were in Spanish, but whichever language, the kids were just as excited to see what the next page said. In other words, they were ecstatic to learn.”

While she was there, Beall was tasked with teaching English to the children. It saddened her that there was no teacher there so that the children might receive an education. Throughout her stay she felt like an investigator, discovering the dramatic and overwhelming needs of the residents of Embajadores de Jesus.

The adults there “have the burden of struggling to prepare for their next hearing at the immigration court; they wonder what tomorrow’s food source will be; they have to leave their children at the church to go make money to buy things as basic as toilet paper; they have to make sure that their family stays healthy since they are constantly surrounded by over 300 other people; and they have to cope with what happened in their past that led them to this point.

Most families do not try to cross the border into the United States because they hear its “nice over there,” Beall said. “Rather, most families were forced out of their homes, forced to flee from the towns they grew up in, where they met their wife or husband, where they watched their children take their first steps — where they had bright plans for their future. Imagine people coming to your house and saying ‘We like your house. You have five hours to leave, or we will kill your entire family.’ What are you supposed to do when you know that they are serious? This is the reality of the situation, the real reason that people are seeking refuge.”

Since she returned, Beall has been wrestling with what more she might be doing.

Some soul searching led her to realize that she is not a teacher, nor a doctor, nor a lawyer, all skills desperately needed at the Border. Rather, she discovered “the best way I can benefit them is to work here and continue to have an income so that I can help from where I am in Maryland.”

Sometimes she feels like her efforts and those of others are “still just a band-aid on a giant gaping wound.” But being present has increased her resolve to be part of creating a beautiful community – for the migrants in Tijuana and in her own life.

She is now a member of Salem Hispanic UMC in Baltimore, where she works with the youth and is beginning to volunteer with the Justice for our Neighbors legal clinic.

She’s not sure exactly what the future holds, but she is open to continuing to experience “all the words.”

Continue reading below to hear Tracey beall in her own words:

EDITOR'S NOTE: After living with migrants in a tent city in Tijuana, Mexico, Tracey Beall, of Salem UMC in Baltimore, (profiled in the story above) shared some of her thoughts on faith and immigration.

“People who just want the same things we do, in the land of the free.” -The Killers

Somehow, we have decided that this is our land, that we can dictate who can and cannot inhabit different areas. We’ve decided that we can put up walls to keep other people out and that certain skin colors are more superior than others.

Normally, God’s house refers to a church, but let’s look at the earth as God’s house for a minute. God prepared the land and built the house brick-by-brick, all by himself. God then invited us into his house to sleep, eat, shower, and live our lives, even though we don’t pay God any rent.

There’s nothing that we did to deserve to live in God’s house, but God loves us and wants us there.

It’s like we’re all crashing on God’s couch. We are able to use all of the amenities of the house: the kitchen; the bathroom; whatever we need for our daily routine. But when you’re crashing on someone’s couch, you don’t have the right to determine the house rules.

You can’t dictate the design that the owner has already worked so hard on, you can’t throw away their house plants, you can’t change the locks on the door, and you certainly can’t decide to put up new walls. You should be grateful that you have a place to stay and do your part to take care of the home.

What a false ownership and superiority we have created for ourselves.

I spent 10 days living in the garage with families who should be inside. I learned how they managed with only a utility sink and pull-string light bulb. I saw how they entertained themselves with none of the indoor amenities while they waited to find out if someone, equal to them in every way besides birthplace and skin color, has decided that they can come inside.

This story and experience are not about me. I am simply the vessel to bring this information to the forefront of your mind. My job is to ensure that you – yes, you – understand to the best of your ability what it is like for a person seeking asylum.

Remember: this isn’t your house. Remember that you have the power to stop people who are trying to throw away plants, change the locks, and build walls. If you continue to sit on the couch, watching TV and ignoring the people knocking on the garage door, then you are letting the problem persist.

All you have to do is get up and try to help open that garage door. You’d be surprised by the incredible people you’ll meet on the other side and what they have to bring to the table.

Another trip to the Mexican border is being planned for Oct. 9-12. Young adults who are interested in going on the trip will be asked to fill out an interest form, which will be released soon. For more information, contact Escobar at .