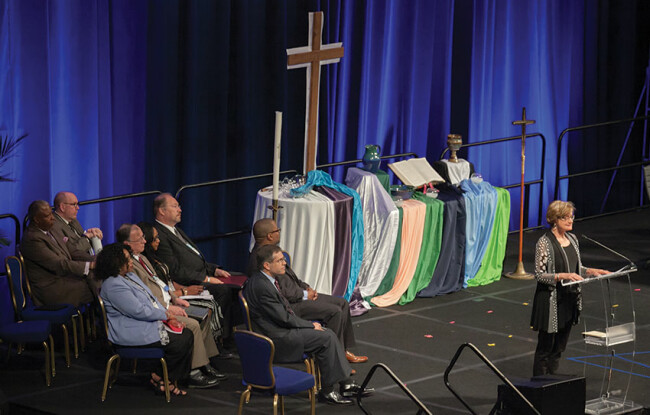 The Rev. Ann Laprade, chair of the BWC’s Council on Finance and Administration, delivers the CFA June 2.

By unanimous vote, members of the 2017 Baltimore-Washington Annual Conference approved the 2018 expense budget of $18.4 million. Of that amount, $14.3 million is budgeted to be received by apportionments, the connectional system of giving used by the church to support mission and ministry around the world.

The 2018 budget continues the focus adopted by members last year, according to the Rev. Ann Laprade, out-going chair of the BWC’s Council on Finance and Administration, who gave the report June 2.

In 2018, there continues to be a strategic shift to fund retiree medical insurance from non-apportionment reserves, totaling $1.5 million. This strategy, she said, allows a faster pay-down on long-term debt on the Mission Center and the dining hall at West River Retreat and Camp; replenishment of conference reserves; and helping to keep cost controls in place.

By paying down the long-term debt, Laprade said, it will result in paying off the debt six years early, saving about $1 million in interest.

The budget calls for increasing the level of conference reserves from 10 percent of the apportionment budget to 15 percent. The 2018 budget identifies $350,000 for this objective, Laprade said. “This is a small change, but we anticipate it will have a stabilizing impact for future conference budgets,” she said.

The best indication of the continued focus on cost controls within the conference budget, she said, is seen by the change in apportionment income requests over the last several budget cycles.

Laprade highlighted several key areas of the 2018 budget. Among them:

The debt reduction efforts are helping to reduce the Mission Center mortgage in 2018 by $39,000.

It shows a continuing forecast of good growth at our camps with a 4.2 percent increase in registrations.

Laprade also updated conference members on the continuing “Imagine No Malaria” campaign. The BWC had pledged to contribute $2.1 million to this churchwide effort at eradicating this killer disease. To date, she said, contributions total $1.93 million. “This puts us at 92 percent of the goal,” she said. “Even though we have officially closed the campaign, we anticipate funds will continue to come in from individuals, churches organizations who are still making donations to fulfill their pledges.”

In a separate action, conference members approved a 2 percent hike in the minimum compensation for full-time clergy. The Commission on Equitable Compensation recommended that the minimum salary be $43,149, a of $846. The housing allowance recommendation remains unchanged at $19,866.

The Rev. Jackson Day reported for the Conference Board of Pensions and Health Benefits, saying that health insurance premiums will be going up in 2018. The local church rate – the amount each church pays for health insurance – will go $20 per month next year, he said. Participant rates will increase $10 to $20 per month, depending on the plan.